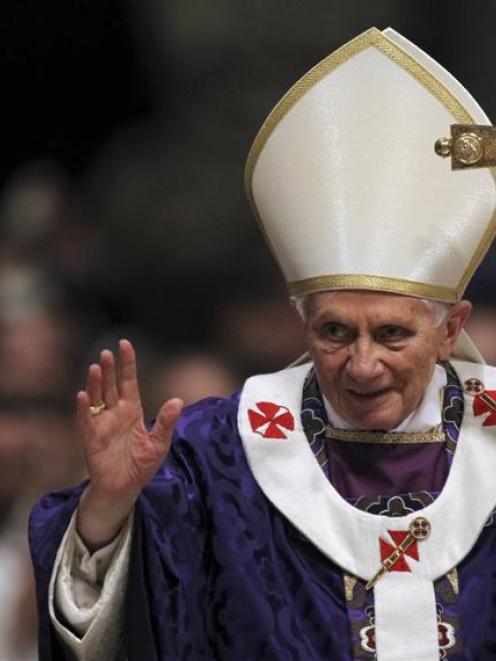 Pope Benedict XVI attends Ash Wednesday Mass at the Vatican. Photo by Reuters.
It's the ROMAN Catholic Church, not the Republican Catholic Church or the People's Revolutionary Socialist Democratic Catholic Church. Its rigid hierarchy and its centralising instincts are almost entirely because of the fact that it became the state religion of the Roman Empire more than 1600 years ago. And the Pope is still, in essence, the emperor.

How Roman are the traditions and instincts of the Church that Pope Benedict XVI has led for the past seven years? Well, one of his titles is ''Pontifex Maximus'', usually translated from the Latin as ''supreme pontiff''.

That was the title of the high priest of the old Roman (pagan) state religion under the Republic. When Rome became an empire, the emperors took it over, starting with Augustus. And somewhere in the fifth or sixth century - the timing is not clear - the title was transferred to the Christian bishop of Rome, who had become the head of the new state religion, Christianity.

This is not to say that the popes are secretly pagans: they are monotheists to the core. (The answer to the rhetorical question ''Is the Pope a Catholic?'' is ''Yes''.) But they are ROMAN Catholics, and the religion they lead is still run like an empire. Very occasionally some maverick pope tries to change the model, but the system always wins in the end.

Benedict XVI was the emperor of a shrinking domain, for the Catholic Church has been shedding adherents not only in the West, where it is everywhere in steep decline, but also in the Latin American, African and Asian countries where it once held unchallenged sway. While secularism is the enemy that steals the faithful in the West, evangelical forms of Christianity are seducing Catholic believers away in what we used to call the Third World.

There are many who blame this haemorrhage on the outgoing Pope (the first time anybody has ever used that phrase about a pope, for they normally die in office, like the emperors did). Benedict was chosen by his colleagues because they believed that he would fight off fundamental change, and he performed his duty well. His resignation for health reasons is an innovation, but it is the first that he has been guilty of.

He held the line on abortion (a sin in almost all circumstances), homosexuality (likewise, unless the person remains entirely celibate), married or female priests (definitely not), remarriage after divorce (ditto) and contraception (under no circumstances, though he later said that HIV-positive prostitutes might be justified in asking their clients to use condoms).

It may seem weird that all of these major controversies are about sexuality or gender, but that's not actually the Catholic Church's fault. It's equally inflexible in defending the doctrines of the virgin birth, the triune God and papal infallibility. It's just that far more Catholics care about doctrines that affect their daily lives than about theological dogmas that have little practical effect.

What the Catholic Church is really fighting is modernisation, which it sees as moral decline. Perhaps it is right (though I don't think so personally), but it is losing the battle. Yet Benedict XVI and the Church hierarchy are condemned to fight this battle until the last ditch, because they believe, probably correctly, that full modernisation would make them irrelevant.

So there's no point in going on about how Pope Benedict XVI (or will we go back to calling him Cardinal Ratzinger after the end of this month?) failed to modernise the Church. He wasn't hired to do that. The only pope who did try was John XXIII, and he died 50 years ago. Every pope since then (including the charismatic but deeply conservative John Paul II) has seen his task as being to stem the tide of change and restore the old order.

The job was largely complete even before Benedict became Pope seven years ago. His job has merely been to ensure that there is no backsliding into liberalism, relativism and other modernist errors, and he has achieved that by ensuring that almost the entire College of Cardinals (the men who choose the next pope) are reliably conservative and orthodox.

The College had already been stuffed with conservative cardinals by his predecessor, John Paul II, so even there he really didn't have to do much except steer the same steady course. Not a single one of the cardinals who are seen as ''papabili'' (men who might be elected as pope) could be described as liberal or reformist. There will be a new pope, but nothing is going to change. The haemorrhage will continue.