I am sorry we are losing David Rice from St Paul's Cathedral in the Octagon. He is the ninth dean I have known and he has done a great job of relating the cathedral to the city.

I have heard a rumour there is to be a civic farewell before he heads north to swap his black cassock for a purple one.

Some of his predecessors live on in my memory for various reasons. Walter Hurst had charisma and a delightful Irish sense of humour, and Tim Raphael made his mark by being mischievous.

I remember a St Hildas service when the church was packed with girls, parents and friends; from the pulpit he expressed greetings, saying: "Welcome to you all, especially those who are giving their annual nod to God.''

He and Bob Mills remain special friends. Bob was a different type and I always admired the precision of his planning, especially for special services.

But my clerical collection has not been confined to Anglicans. Jack Somerville was chancellor of the University of Otago and had been moderator of the Presbyterian General Assembly.

He, Jock Hayward (the university's splendid registrar) and I used to take turns to drive to Rotary
on Thursdays.

Every third week was a test of nerves because Jack was more interested in conversation than brake and accelerator. He knew everyone of importance in New Zealand but always retained the common touch.

My favourite Roman Catholic priest was Brian Scanlan, who had been a colleague at the Otago Daily Times, but there was a monsignor who shall be nameless as a close runner-up. I played in the same cricket team in Greymouth.

Ten of us were there on merit; he was in the Marist line-up by virtue of enthusiasm and his clerical collar. Everyone liked him and I suspect he was dismissed for a score of four more often than anyone else in history.

Opposing bowlers always gave him a full toss on leg stump which he swung to the boundary. They then bowled him next ball, or soon after. He had only one shot and he was usually restricted to using it just once in each innings.

Baptists are not noted for their ecumenical enthusiasm, but years ago there was a notable exception.

Barrie Hibbert's preaching used to fill the old Hanover St church and his Lenten services attracted people from all denominations. He was extremely likeable and made friends
wherever he went.

All the men I have mentioned were liberals. So, too, was another cricket enthusiast, Methodist minister Donald Phillipps.

I guess their broadminded attitudes had a lot to do with their popularity. It certainly influenced me because I have an aversion to bigotry and can become fiercely irritated when some sections of the media invariably approach fundamentalists when seeking a "Christian'' comment.

Returning to where I began: David Rice will be a hard act to follow, but Dunedin's loss will be Waiapu's gain.

- Gordon Parry is a Dunedin writer and broadcaster. 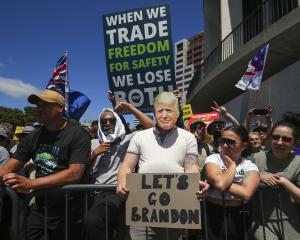