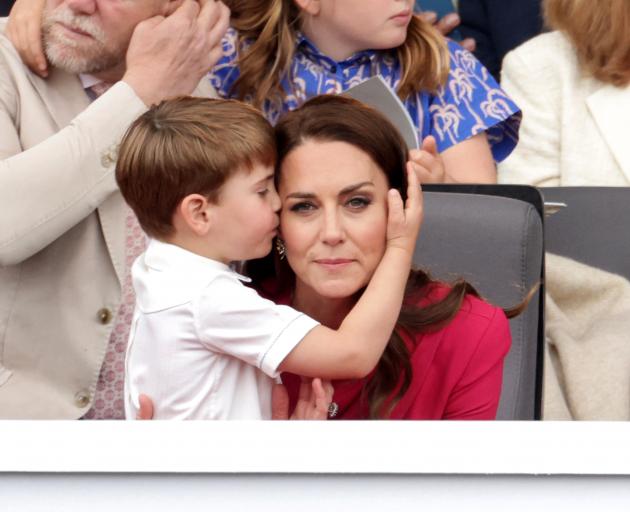 Prince Louis hugs his mother, Catherine, Duchess of Cambridge, during the Platinum Pageant in London earlier this month. PHOTO: GETTY IMAGES
With the Queen absent and her immediate heirs scarcely a novelty, Britain’s child royals emerged as a precious asset over the jubilee — and were still generating loyal clicks and content days after being temporarily discharged from duty.

An earlier warning from William that his son would enjoy a "normal" upbringing has proved to be, if not exactly baseless, capable of delightfully media-friendly expression. Not only George, but all three apprentice royals, aged 4, 7 and 8, contributed extended service through the jubilee weekend, displayed in eye-catching outfits ranging from smart casual to — perfectly normally — a historic sailor suit.

The smallest Cambridge, Louis, modelled a garment understood to have been William’s and which prettily signalled this lightly updated family’s unequivocal commitment to dynastic continuity. Victoria and Albert once enjoyed dressing up her 4-year-old heir, Bertie, in a sailor suit, in which the future degenerate would be painted by Franz Winterhalter.

His successors’ jubilee appearances in carriages, on walkabouts, at home, on balconies and in the front row at mass events have supplied quantities of cherishable material, already the subject of expert analysis, in which they are seen yawning, waving flags, squabbling over sweets, baking with Mummy and even learning, on the walkabout, to quip.

Charlotte, considered the best trained of the three, is said by a number of lip-reading authorities to have corrected her older brother’s posture, as well as comically admonishing the younger one. Bless, bless and bless.

In most reviews, Louis is agreed to have excelled at adorableness, confirming his parents’ wisdom in showing off, along with their doomed child, the two constitutionally irrelevant ones. "We all had an incredible time," the Cambridges wrote, "especially Louis ..." The dots refer to various episodes of face-pulling and restlessness that helpfully advanced the family’s ritual claim to some sort of universal domestic appeal, along the lines established by Victoria. At the same time, the public could appreciate how beautifully this obstreperous new character — provided he does not change or quit — will complement, in future Windsor chronicles, those of "sensitive" George and "bossy" Charlotte. There was even some useful little prince-related controversy, with a Louis-is-a-brat contingent generating still more extravagant claims for the child’s charm and potential. For the celebrity nanny, Jo Frost: "What we saw was an insight into Louis’ personality and quirky temperament which was a delight to see."

If such illustrated conjecture does not breach Ipso press standards on children’s privacy or, indeed, article 16 of the UN Convention on the Rights of the Child, it can only be because, when it suits, the Cambridges choose to rise above it.

The Ipso guidance, "Journalists can print photos of children which don’t show anything that might affect a child’s welfare", might rule out media analysis of a civilian 8-year-old’s facial expressions or character but as something of a specialist in early childhood, the Duchess of Cambridge is presumably confident that her minors will survive this exposure, and without the resentment that surfaced early in the Prince of Wales. On the eve of his investiture, aged 20, he told the BBC about coming to feel "stuck": "It’s something that dawns on you with the most ghastly, inexorable sense. I didn’t suddenly wake up in my pram one day and say ‘Yippee’, you know."

Maybe it’s a further guarantee of the Cambridge children’s retrospective endorsement of parental ambition that they have witnessed, thanks to Uncle Harry’s jubilee visit, what lies in store for apostate spares, even in exemplary families: outcast seating and fraternal non-speaks. "It’s a mix between The Truman Show and living in a zoo," he said last year, when asked about his upbringing. "The biggest issue for me was that being born into it you inherit the risk, you inherit every element of it without choice." The meagre supply of images of his and Meghan’s children is, while entirely consistent, still widely resented.

To be fair to the Cambridges, the family’s contrasting showcasing of its young talent probably strikes many fellow professionals in entertainment or influencing as incredibly restrained. True, the young Cambridges probably haven’t been consulted on the ethics of exhibiting small children to symbolise an endangered monarchy’s stake in the future. But, as with next-generation Beckhams and Kardashians, the children could also enjoy lifelong rewards for doing little more than getting dressed and looking at the camera.

In fact, with the Commons’ Digital, Culture, Media and Sport committee now proposing that child social media influencers be registered and protected as "working children", the Cambridges’ venture into semi-professional (given only that the working adults are paid directly) partnership with their children could hardly be better timed.

Child influencers, the committee reported, may, although "the primary income streams for their families", be unprotected by existing UK child performance regulations. "At present, there are very few ways to regulate how children are participating in the influencer community, and the impact this may have on them, including on their consent and privacy."

Meanwhile, the reformist influencer Sarah Adams ("Mom Uncharted") is among those now discouraging parents from posting images of their children. "All the choices I got to make for myself, everything I put out there — I chose that. I made those decisions," she told BuzzFeed. "And I would like my kids to have that same sense of autonomy and not see a whole footprint following them around that they didn’t really have any say in."

Which is all very persuasive.

Of course children should be protected from exploitation by their own parents, whether it’s via tasteful proofs of domestic bliss or videos memorialising infant embarrassment or hilarious cuteness.

But have any of these campaigners even considered what this sort of regulation could do to the British monarchy? — Guardian News

--  Catherine Bennett is an Observer columnist.