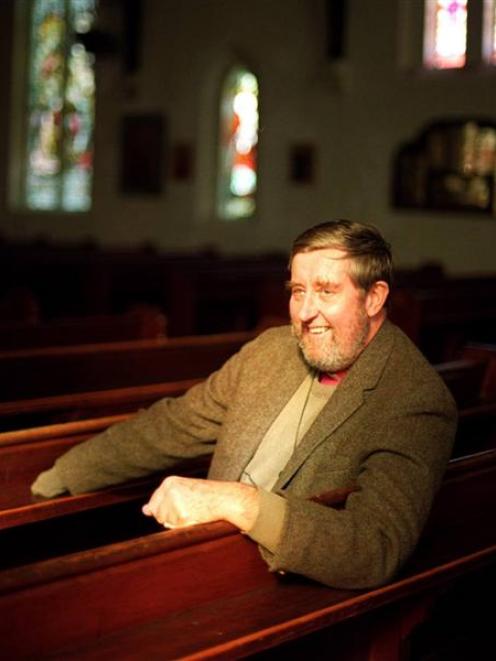 John Osmers in Dunedin in April 1997. The Diocese of Dunedin has a Companion Diocese relationship with his Diocese of Eastern Zambia.
Ian Harris reflects on the anti-apartheid struggle.

In a remarkable turnaround, causes once viscerally hostile to each other joined forces to mark the centenary of the African National Congress in Wellington last weekend. 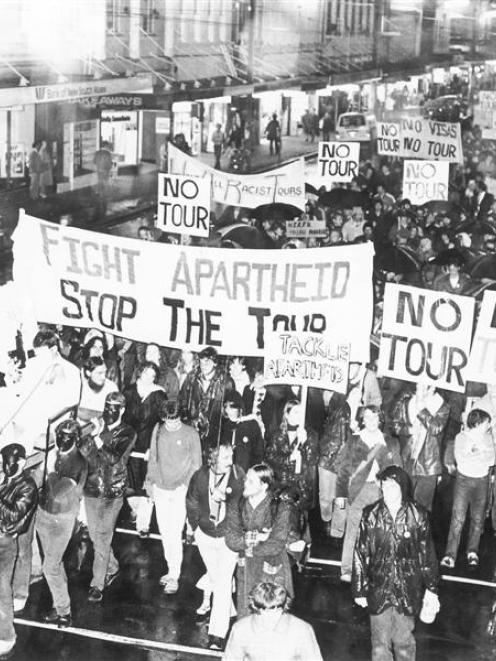 An anti-Springbok tour march in Dunedin in 1981.
The parties are now at peace - and the NZRU contributed $1000 to conference costs.

Rugby administrators also met a delegation representing those who were once at loggerheads with the rugby union. After all, the anti-tour movement is part of the union's history too.

The delegation included a South African whose evidence, in a case brought by Philip Recordon, Patrick Finnigan and counsel Ted (now Sir Edmund) Thomas, helped scupper the All Blacks' tour of South Africa in 1985.

He is Makhenkesi Arnold Stofile, a Presbyterian minister and Princeton graduate who, on returning to South Africa after the court injunction stopping the tour, was arrested on a trumped-up charge and sentenced to 11 years' jail. He served three years before the changing political scene brought his release. His wife, Nambita, was also jailed.

Although lawyers in New Zealand met the expenses of the case, the Stofiles bore by far the greater cost, and the conference gave them a standing ovation. In post-apartheid South Africa, Mr Stofile became premier of Eastern Cape, sports minister, and is currently ambassador to Germany.

Former All Blacks Bob Burgess and Graham Mourie and Olympic 5000m runner Anne Hare told why they refused to play sport on apartheid terms. Their reasons boiled down to morality and human decency - qualities unfortunately rather rare among their sporting contemporaries, administrators, fans and government politicians, whose focus was their own freedoms, not others' freedoms.

Halt All Racist Tours leader Trevor Richards and other protesters recalled high days and low days in their efforts to disrupt the 1981 Springbok tour of New Zealand.

In the process, New Zealanders were forced to face the reality of racist attitudes at home - and how ready certain politicians were to exploit those prejudices for their own ends.

Maori were as divided as everyone else over rugby contacts, but the trauma of the tour proved a turning point. Its legacy is a heightened awareness of how far New Zealand had to go (and still has) to achieve full equality of opportunity, status and respect for Maori.

Christian conviction played a major role in the campaign against apartheid, and attending the conference were two New Zealand churchmen whose contribution to freedom and equality in southern Africa stands out.

Anglican Bishop John Osmers has spent 47 years in the region, helping South African and other refugees and joining the ANC himself.

In 1979, South African security forces sent a parcel bomb that blew off his right hand - with an unintended consequence in the formation of an ANC church front. Expelled from Lesotho, he was nevertheless encouraged, because the attack brought home to him the importance of the work he was doing.

In Botswana, Bishop Osmers again became a target of South African security forces, who in 1988 sent a death squad to assassinate him. Tipped off, he escaped to Zambia, where he continued to support ANC cadres and served as an ANC chaplain.

"If the national military can have chaplains," he says, "why can't the liberation movements?"

The other churchman is Anglican monk Michael Lapsley, who went to South Africa in 1973, was expelled in 1976, and lost both arms and an eye in 1990 when he opened a letter bomb in Zimbabwe. Also an ANC chaplain during the liberation struggle, today he heads the Institute of Healing Memories in Cape Town.

On the eve of the Wellington conference, police shot dead 34 striking workers at a platinum mine near Johannesburg. Mr Stofile condemned the massacre, and the conference observed a minute's silence for the victims.

Inevitably, the killings revived memories of similar incidents during the apartheid era. And there is a link - not overtly racial now, but in the continuing economic exploitation of South Africa's people and resources by foreign companies. On the road to human dignity, there is still a long way to go.