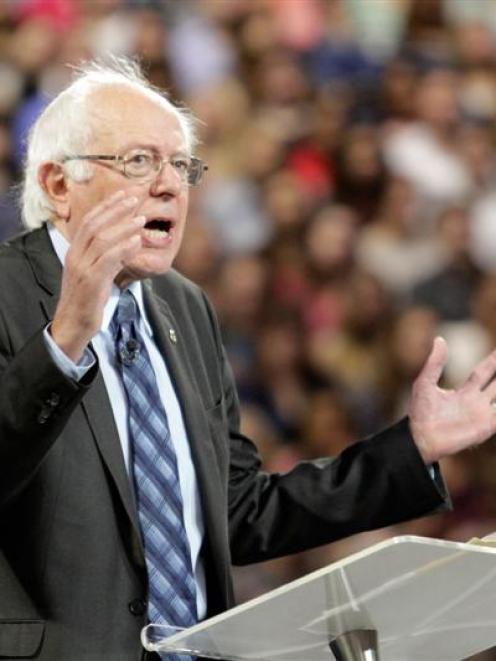 US Democratic presidential candidate Senator Bernie Sanders delivers an address to Liberty University students at the school in Lynchburg, Virginia. Photo by Reuters.
Jeremy ''Jez'' Corbyn and Bernie Sanders are very much alike, and so are their ambitions.

Mr Corbyn wants to lead Britain's Labour Party into the next election and become prime minister; Mr Sanders wants to win the Democratic Party nomination and become the next president of the US.

And then each plans to turn his country sharply to the left.

To the vast surprise of practically everybody, Mr Corbyn has just achieved the first stage of his master plan: on Saturday, he became the leader of the Labour Party.

When he entered the leadership contest, the bookmakers were quoting odds of 200-to-one against him, but he ended up winning the leadership by a landslide.

Senator Sanders was also seen as a complete no-hoper when he threw his hat into the ring: 74 years old (Mr Corbyn is 66), no money and no well-honed political machine behind him (ditto), and far too left-wing to win the Democratic Party's presidential nomination, let alone the presidency.

But something unexpected is also happening with Mr Sanders' campaign.

There were no other high-profile candidates for the Democratic nomination: most people assumed it was Hillary Clinton's for the asking.

But then Mr Sanders began to creep up on her, especially in the two states where the first primaries will be held, New Hampshire and Iowa.

The last three polls have shown Mr Sanders leading Mrs Clinton in New Hampshire by an average margin of 7.5%, and he is now 1% ahead in Iowa, too.

Mr Sanders is not as far left as Mr Corbyn, of course.

No elected US politician is as far left as Mr Corbyn, who promises to nationalise the railways and energy companies, scrap university tuition fees, bring back rent controls, raise taxes and introduce a national maximum wage to cap the wages of bankers and other high earners, impose an arms embargo on Israel, and get rid of Britain's nuclear weapons.

When asked if there were any circumstances under which he would deploy British armed forces abroad, Mr Corbyn replied: ''I'm sure there are some but I can't think of them at the moment.''

He's a republican, although he says that ending the monarchy is ''not the fight I'm interested in''.

He's a vegetarian who does not own a car, and he looks a little like Obi-Wan Kenobi.

He is, in other words, the real McCoy.

Bernie Sanders, by contrast, lives in the United States, where many people regard ''democratic socialism'' as akin to devil worship.

He favours universal healthcare funded by taxes (supported by all parties in Britain) and publicly funded elections with strict limits on corporate donations (ditto), and he, too, advocates free higher education and higher taxes on the rich.

But he's not planning to nationalise anything, bring in rent controls, end all American military interventions overseas, or ban arms sales to Israel.

Mr Sanders is as far left within the American political spectrum (which doesn't extend very far in that direction) as Mr Corbyn is within the broader British spectrum.

Could he really pull off a Corbyn-style upset and win the Democratic nomination?

It depends on whether Hillary Clinton's current stumbles end in a big fall in her support.

Last week's opinion polls revealed she had lost her lead over her two likeliest Republican opponents in next year's presidential election, Jeb Bush or Ben Carson - and even Donald Trump was drawing level with her.

The Democratic National Convention is still 10 months away, but it's already late for anybody other than Vice-President Joe Biden to enter the race with a good chance of winning - and Mr Biden is deeply conflicted about running.

So if Mrs Clinton fades, Mr Sanders would have a chance: the odds against him are already a good deal shorter than 200-to-one.

Whether he could actually win the presidency is a different question.

British pundits were unanimous in saying that Mr Corbyn has no chance of winning a national election and becoming prime minister.

Former Labour leader and prime minister Tony Blair went further: ''If Jeremy Corbyn becomes leader it won't be a defeat like 1983 or 2015 at the next election. It will mean rout, possibly annihilation.''

But Labour just lost the last election, and the next one is five years away.

There is still time to change horses if Mr Corbyn isn't working out.

Whereas the US election is next year.

Could Mr Sanders win it?

The professional pundits and pollsters in the United States say no, because he's too far from the mainstream.

Mr Sanders just points to the despair that grips so many middle-class Americans as the rich get ever richer and their own living standards stagnate.

He could be right: it's the same despair with business as usual that has pushed Donald Trump out in front of the Republican nomination race.

And that would be something, wouldn't it?

Bernie Sanders versus Donald Trump for the presidency.

At last Americans get a real choice.