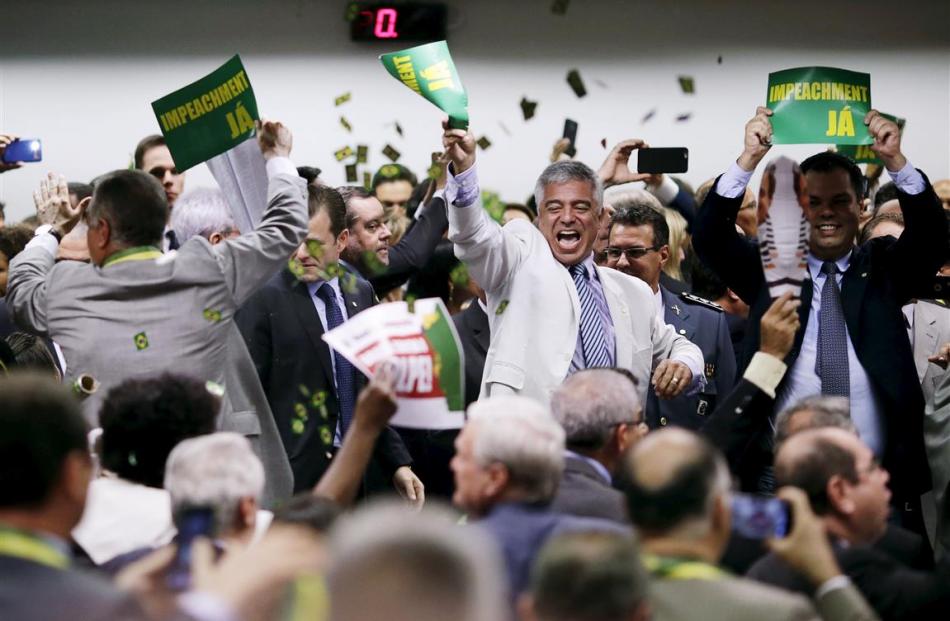 Members of the impeachment committee celebrate after voting on the impeachment of Brazilian President Dilma Rousseff at the National Congress in Brasilia, this week. Photos by Reuters. 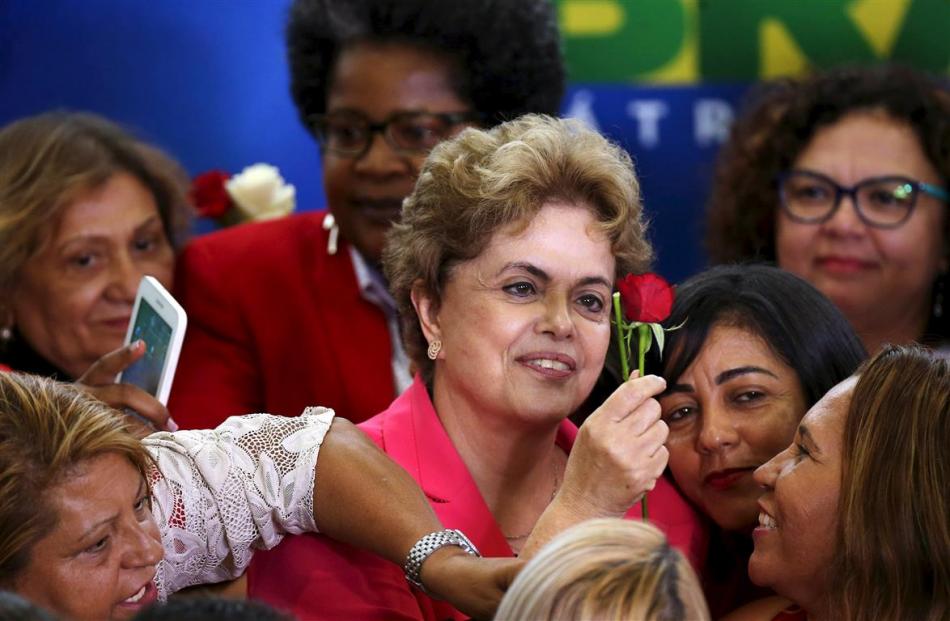 Mrs Rousseff raises a rose during the meeting ‘‘Women in Defence of Democracy’’ in Brasilia last week.

On Sunday, President Dilma Rousseff of Brazil faces an impeachment vote in the lower house of Congress.

That she manipulated government accounts to make the deficit look smaller than it really was before the last election.

Governments always try to downplay the deficit before an election.

I've covered dozens of elections, and at least one-third of the time it later came out the government had been hiding how bad the financial situation was.

It's naughty, but it's not a hanging offence.

The knives are out for Mrs Rousseff in Brazil, and if she loses the congressional vote this weekend she is heading straight for impeachment.

That would mean that she would be suspended for 180 days even if she ultimately survived the process.

So who would take over while Mrs Rousseff was on trial?Vice-president Michel Temer, of course, and he would be more than happy to do that.

In fact, a recently leaked audio tape reveals him rehearsing the speech he would make after Mrs Rousseff was suspended.

"Many people sought me out so that I would give at least preliminary remarks to the Brazilian nation, which I am doing with modesty, caution and moderation ...'' he modestly begins.

Mrs Rousseff was furious, accusing Mr Temer of betrayal (he only led his party out of her coalition government last week), and she now talks about him as the chief conspirator in a coup plot against her democratically elected government.

But she shouldn't worry too much about Mr Temer, because he is also facing impeachment, on the very same charge of cooking the government books to hide the scale of the deficit.

Who would take over if Mr Temer was also impeached?

The speaker of the lower house of Congress, Eduardo Cunha, is next in line - but he is facing money-laundering and other grave charges connected with an immense scandal in the state-owned oil company, Petrobras. (His secret Swiss bank accounts hold more than $NZ7.2million.)

So the job of running Brazil would go to the speaker of the Senate, Renan Calheiros - except that he is also being investigated on the same charges.

Indeed, more than 150 members of Congress and government officials are currently facing charges of bribery, corruption and money laundering as part of the "Operation Lava Jato'' (Car Wash) investigation into the affairs of Petrobras.

This is not some banana republic.

This is Brazil, a country of 200million people with the sixth-biggest economy in the world.

Yet the entire political class is under suspicion of criminal behaviour, apparently with good reason, and day after day the streets are full of angry demonstrators.

Brazil has been fully democratic for the past three decades, yet Mrs Rousseff now worries openly about a coup.

Some of the anti-government demonstrators are openly calling for a military takeover.

This is a country in meltdown - but why now?

Because the economy has gone belly-up.

There was money then for huge social spending - enough to lift 40 million Brazilians out of poverty - and Mr Lula was beloved by all.

But the Crash of 2008 had already taken the bloom off the rose before Mrs Rousseff succeeded Mr Lula in 2011, and Brazil's export-dependent economy has taken a terrible beating since then.

It was growing at 3.5% annually under Mr Lula.

It's mostly not Mrs Rousseff's fault, although she could have done better.

Among the big, fast-growing economies of the former Third World, only India has escaped.

And this collapse in growth is why opinion polls show that 68% of Brazilians now want to see Mrs Rousseff removed from power.

There is unquestionably a major political crisis in Brazil, but it may not be quite as bad as it looks.

The latest head-count suggests the vote in the lower house of Congress may not produce the two-thirds majority of votes that is needed to impeach Mrs Rousseff.

Even if it does, Mrs Rousseff can appeal to the Supreme Court.

If that fails, the Senate must vote on impeachment - and if it also votes yes, Mrs Rousseff can appeal to the Supreme Court again.

And so far the military shows no signs of wanting to seize power again.

So Mrs Rousseff may still be lumbered with the miserable and deeply unpopular task of running a large and boisterous country that is going through a severe cyclical economic downturn for another two and a-half years.

She'll probably be glad when her term is up.