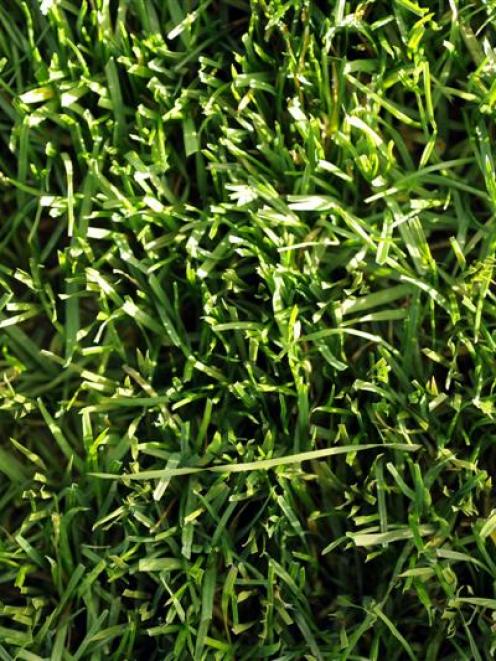 The cameraman asked the hovering fourth member of our group, a management-mandated minder, if he could take a few steps back on to the Hallowed Turf to widen the shot of the empty south stand in the background.

The minder, a paid stadium employee whose job it was to prevent us from straying into inappropriate areas of the stadium, responded with a polite but flat "No".

The turf, which had just been mowed in a lovingly precise diagonal criss-cross pattern, is apparently too delicate to withstand the wear associated with six steps of a cameraman.

The answer to the question why spend another million on an artificial turf is not just that we are currently wasting more than that level of ratepayers' treasure over time on: several specialist groundsmen, specialist mowing machines, turf aeration, watering and fertiliser systems, the monitoring of ambient light spectrum and levels, roof washing to let the right light in, under-roof dew suppression sprayers for the same thing, wind-speed, temperature, relative humidity, and grass-growth monitoring to determine how many days or weeks (depending on weather) are required for The Turf to recover between events.

The Hallowed Turf is ludicrously expensive to try to grow under a roof, but the worst waste is in down-time.

The period of The Turf recovery between events means that most of the time you cannot use the main stadium while you wait for the grass to recover.

If the grass recovery time for a two-hour game is one week, this means that you can not use the pitch for 166 out of 168 hours, or 99% of the time!

Another issue is that The Turf requirement of natural wind movement means that you can not drop the stadium skirts to ground level to keep out the wind or the cold, both of which have made miserable many events at the stadium, including the Elton John concert for those in prone seating areas.

If you assume that the stadium is only to be used for a handful of superstar rugby games each year, then The Turf almost makes sense even if we did have to spend more than $600,000 sewing an artificial Grass-master reinforcing into it to overcome its previously denied weakness when growing under a roof.

Other unaffordable expenses include: legions of paid staff (500-700 for a big event when Rotary volunteers used to do a good job at Carisbrook), a board of deflectors, insurance (DCC should self-insure), excessive maintenance for guarantee purposes, security contracts requiring bomb disposal and anti-terrorist-trained staff, thousands of freebie rugby tickets for the well-connected, and having anything sincere to say about the ORFU.

Having paid the ORFU $7 million for Carisbrook to bail it out the time before last, we should banish it back to the House of Pain on a cost-covering rental basis until it has learnt humility, honesty, how to share and how to promote good grass-roots rugby.

It is easy to "pokie" scorn at the ORFU, but can you think of any sports organisation in our history that deserves it more?

Having the All Whites as anchor tenants for the stadium with an artificial turf so it could be constantly available between football usage would get over the problem of the stadium being empty most of the time.

None of this deals with the debt, but at least it would get the stadium used without bleeding ratepayers so heavily on running costs.

It is said that there is nothing as boring as watching grass grow.

In Dunedin, there is nothing more unaffordable than watching grass growing in Forsyth Barr Stadium.