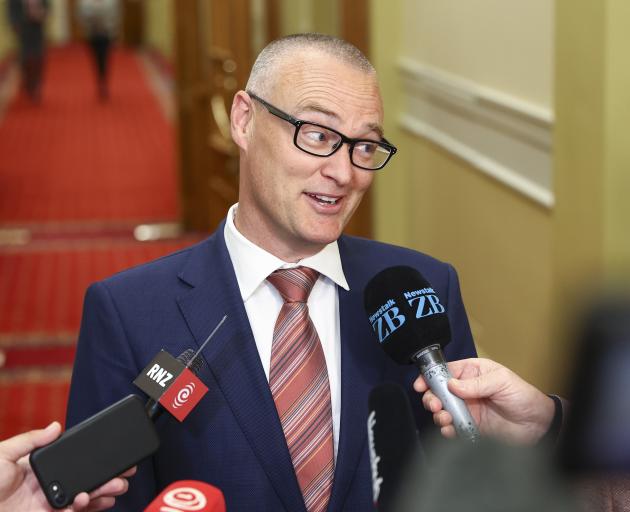 David Clark meets the press outside Labour’s caucus meeting this week. PHOTO: GETTY
As a doctor of theology, Dunedin MP David Clark will be very familiar with the phrase "to err is human, to forgive is divine".

Dr Clark’s Covid-19 errors have been well-documented, and received another go-around this week after Prime Minister Jacinda Ardern ended Dr Clark’s time in purgatory and restored him to the executive.

Having stepped down as Health Minister in July, Dr Clark’s penance was not a long one but neither, arguably, were his sins as great as some who have endured a departure from Cabinet and enjoyed a return.

In March 2012, Nick Smith resigned as ACC Minister after he wrote a letter on ministerial letterhead on behalf of a National Party activist, and was back around the big table by the following January.

Ruth Dyson resigned from Helen Clark’s Cabinet in October 2000, following a positive breath-alcohol test when driving home from work, and was back as a minister by June 2001.

Dr Clark’s trip to the beach with his family during lockdown, while spectacularly ill-judged, is not in the same league, although he will never be allowed to forget it if some very uncharitable comments on the Otago Daily Times social media channels this week are any indication.

He will be well aware that another mistake, even a trivial one with no consequences other than poor public perception, will not be suffered gladly.

When Dr Clark stood down from Cabinet, Ms Ardern said if he returned it would not be in a health role.

The Prime Minister was as good as her word, allocating Dr Clark commerce and consumer affairs, state-owned enterprises, statistics and a revamped digital economy and communications role.

That portfolio was retired Dunedin South MP Clare Curran’s passion, and Dr Clark has said he looked forward to a conversation with her about the role.

Dr Clark also now has responsibility for the Earthquake Commission, which in the last term was initially Megan Woods’ responsibility before being taken over by Finance Minister Grant Robertson.

With the reverberations of the Canterbury quakes still being felt a decade on, this could end up being one the trickier tasks Dr Clark has now taken on. 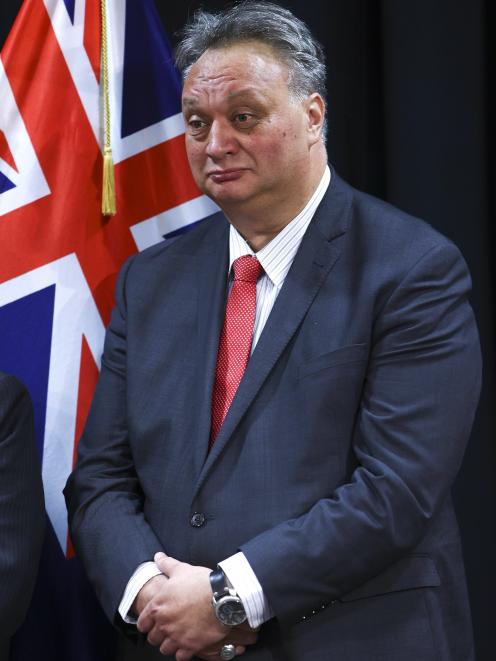 Te Tai Tonga MP Rino Tirikatene was also elevated to the ranks of under-secretary: his roles in oceans and fisheries and Maori trade and export seem a well thought out match.

One-time Otago University Students’ Association president Ayesha Verrall shot straight into Cabinet just days after becoming an MP, her infectious diseases experience deemed critical in these pandemic times ... a call which may have left her fellow doctor, Invercargill List MP Liz Craig, wondering when her skills will be called upon.

Dr Craig and her fellow southern backbenchers will now have to wait for select committees to be reconstituted to see where that their duties will be.

Committees are, broadly, constituted on a proportional basis, and elect their own chairman or woman, a factor in five National MPs being elected to those posts in the last Parliament.

Labour has 12 second-term or longer-serving MPs hoping for a step up the ranks, and they will be keen to prove themselves in a committee chairman or woman role.

However, Labour has guaranteed the Green Party one of those jobs, and by convention an opposition MP chairs the regulation review committee, so the number of hopeful MPs already exceeds the jobs available.

There are still deputy whip roles available, but Labour is running out of meaningful jobs to keep its caucus occupied.

Meanwhile, National Party leader Judith Collins has said she will announce her portfolio allocation at the end of next week.

No, not ours, not even the shemozzle in the United States, but the increasingly competitive Bird of the Year.

Waitaki MP Jacqui Dean has thrown her weight behind the little blue penguin, although she did flirt with the idea of voting for Hutton's shearwater, the Kaikoura titi.

It was not that surprising when Mr Robertson was named deputy prime minister on Monday, and even less surprising that he retained sport and recreation, a role he deeply loves.

Adding racing to his weighty list of portfolios was more of a surprise though.

"I grew up a stone’s throw from Forbury Park, so I have a lifelong interest and affinity with parts of the racing sector," he explained. 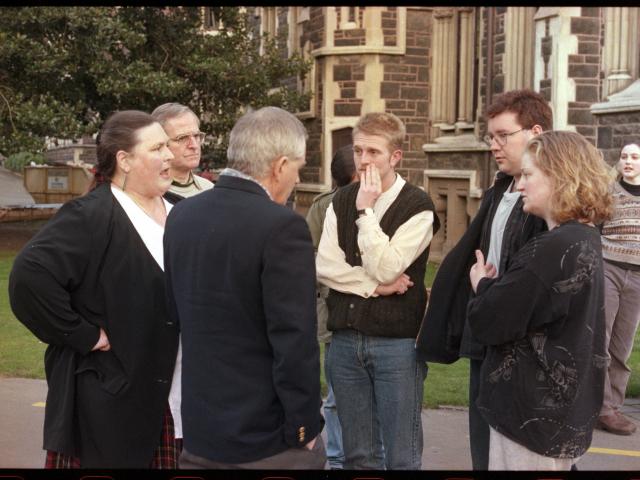 It is August 18, 1996, and University of Otago students have occupied the registry, much to the chagrin of then-chancellor Judith Medlicott (left).

I'm not sure why the Houlahan would assume that as a Dr of Theology Clark would be well aware of Alexander Pope's famous line "to err is human: to forgive divine". I suspect Clark wouldn't have a clue what it even meant in the context it was originally offered. It's something an English major would be more aware of than a theology major. I prepared lo lay one of my hard earned dollars down in a bet that Clark will make a mess of his new portfolios. I don't think he has the type of street level smarts that it takes to be a successful Minister of State. He may be academically brilliant, high IQ, a brilliant strategist and policy developer but none of these things mean that you can function like a normal person in the real world.
We've all met them, academically brilliant people, highly qualified, produce high level theoretical work, are brilliant at quiz night at the pub but you regularly wonder how they find their way to work each morning, they just can't function in a practical way in the real world.
I put Clark squarely in that group, despite his apparent intellectual strengths he just hasn't got what it takes to be a successfully functioning Minister of the Crown.

An anti-intellectual comment, marginalising academic skills in the 'real world'.
We've all met them, the self-convinced Utilitarian. Meanwhile, abstract and critical thinking are essential to working Systems.

Houlahan is informed. Probably why he thinks as he does.

Houlihan maybe informed but that doesn't explain why he would think a dr of theology would understand a non theological piece of poetry from the 18th century.
I absolutely refute your suggestion that my comment is anti intellectual. I merely pointed out that academic or intellectual brilliance is no measure of ability. How else could you explain Clark's actions in breaching the very lockdown restrictions that he implemented and was responsible for enforcing. His inability to oversee the implementation of the very same restrictions at the border very nearly resulted in disaster.

A second chance for Clark says two things. Ardern isn't up to the job and there is a lack of depth in the Labour ranks. Neither bodes well for the next 3 years.