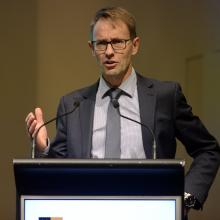 Bookish looking, with spectacles threatening to overwhelm his face, he is conservatively dressed and does not appear to be someone with a larger-than-life presence or an enormous ego. In daily Covid-19 media conferences he is quietly spoken, answering questions directly, and admitting when he does not know the answer to something and offering to check it out rather than attempting to give fudgy or incomplete answers. (Health Minister David Clark, who is prone to preface answers to questions in Parliament with public relations waffle, could learn from him in this regard.)

All the same, Dr Bloomfield knows his role is not about frightening the horses and earlier in the week he was reluctant to give out numbers of possible cases based on predictive modelling which might have been alarming. As he pointed out, the modelling was based on doing nothing and that is not what he is about.

Before Covid-19 became an issue, were many of us even aware Dr Bloomfield has been at the helm of the Ministry of Health since the middle of 2018?

At that time, he took over from former director-general Stephen McKernan who had been brought back in an acting capacity after the resignation of controversial figure Chai Chuah in 2017.

Unlike several of his predecessors, Dr Bloomfield has a clinical background and, most importantly in the situation he now finds himself in, has public health as his specialty. He qualified in medicine at Auckland University in 1990, worked as a clinician for several years before training in public health in 1996.

He has said prevention has been his passion since, although his particular area of interest is non-communicable disease prevention and control. He also has World Health Organisation experience working in that area in 2011.

His previous clinical experience and high level appointments at district health boards (he was chief executive at the Hutt Valley District Health Board before becoming the DG) give him a depth of understanding of the blundering beast which is the country’s health system, including its strengths and weaknesses, which will be vital in his current role.

He knows the Ministry of Health well, too, his previous roles there including a four-year stint as its chief adviser on public health from 2006.

His leadership style, which has been described as ‘‘convene and collaborate’’ and ‘‘ensuring direction not giving direction’’ will be being tested in the current crisis.

His is an unenviable job, the day-to-day complexities of which may be hard for many of us to understand. He will have to manage a plethora of interests, some difficult people with big egos (not just politicians), seek wide advice and work out who is worth listening to and tune out the other noise, sift an enormous amount of information to ensure what he communicates is accurate, and lead by example by projecting calmness.

Those who have experienced him at meetings in former roles note while he might not have usually been the most forceful person in the room, any contribution was always well considered and well informed.

Others describe him as methodical, measured and sensible. It was good to read Cancer Control Agency head Diana Sarfarti, who studied with him 25 years ago quoted in Stuff as saying she has never seen him rattled.

‘‘He’s always extremely calm. He always gives a sense of a safe pair of hands.’’

That is what is needed. Cometh the hour, cometh the man.