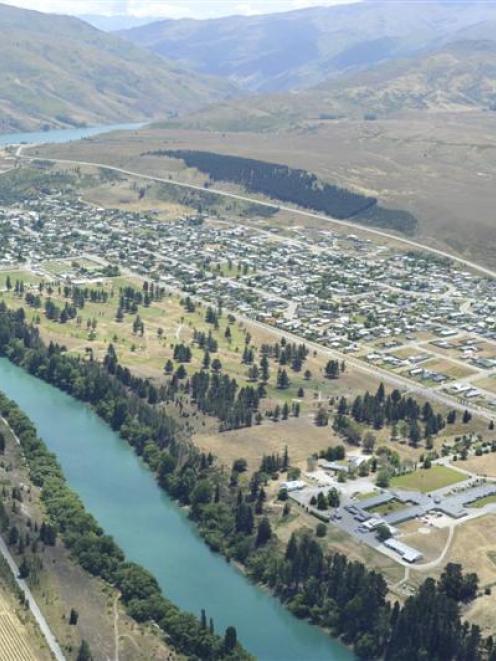 Clyde and the Clutha River.
Polluting of waterways by farmers has for the past several years, quite rightly, been the target of public condemnation and legal action by regional councils.

However, evidence that farmers are not the only cause of such pollution may surprise some.

Urban-sourced pollution of waterways does not have the same public profile as that from farms, but one of the country's great rivers, the Clutha, is still used to remove urban waste from several towns on its banks. Readers were reminded this week that treated sewage from Alexandra, Cromwell, Lawrence, Balclutha, Stirling, Tapanui, Kaka Point and Owaka all ends up in the Clutha, while treated sewage from Queenstown is discharged into the Shotover River. Dunedin waste is treated and discharged to sea through the Tahuna plant but most of the city's stormwater - untreated - drains into Otago Harbour.

While dairy farmers have largely been the focus of recent attention about waterway pollution, a report carried by Fairfax this week showed some local authorities had struggled to abide by the conditions of their discharge consents. It reported this week that, in the past four years, fines of $153,000 for 123 breaches by 34 of the country's 61 district and city councils had been issued.

These were made up of eight prosecutions, 47 infringement fines and 68 abatement notices.

In contrast, over the same period, there were 151 prosecutions of dairy farmers, with 1564 infringement notices and 1698 abatement notices. Dairy farmers paid court-imposed fines totalling more than $3.2 million. The heaviest fine for a farmer has been $90,000 and for a local authority $30,000, raising questions about consistency. In a similar vein, in the past six years, while 76 Otago dairy farmers have been prosecuted for illegal effluent discharge, for allowing livestock to access waterways or for pugging, no Otago councils have been fined for any breach of any kind (Environment Southland has recently taken successful cases against Invercargill city and Gore district councils).

Dairy farmers have become public pariahs when it comes to pollution of waterways. A few with sloppy practices have let the majority down, but it would seem the track record of councils - which it could be argued should be setting the standard for their ratepayers - is also not great.

Of course, it must be acknowledged that imposing a fine for polluting or for illegal discharges works only when the person or body being prosecuted has the technology or system available to meet obligations but, for whatever reason, does not use it. Such a case outraged farmers in February 2010, when raw sewage flowed into Dunedin's Kaikorai Stream after a sewer pipe was blocked - but the city council escaped prosecution by the Otago Regional Council. A year earlier a plumber, found to have been responsible for raw sewage flowing into an East Taieri stream, was issued with a $750 infringement notice and ordered to pay costs of $918 by the Environment Court.

The cost of upgrading systems, too, needs to be taken into account. All 390 Otago dairy farms must now discharge dairy effluent to land and, relatively speaking, such technology is costly. For a local authority, finding an alternative to discharging to water is extremely expensive. Project Pure, which treats sewage from Wanaka and Albert Town and discharges on to land, cost $23 million. A similar project to divert Queenstown's sewage discharge from the Shotover River will cost ratepayers $30 million. Nevertheless, a breach of conditions is surely just that - a legal transgression.

The regional council is progressively forcing councils to find alternatives to discharging to waterways as historic consents lapse, and in the cases of Alexandra, Lawrence, Stirling, Tapanui, Kaka Point and Owaka, is steadily insisting on a higher quality of discharge to waterways until an alternative is found. While leniency is acceptable until new technology is introduced, individuals, businesses, organisations and councils alike must adhere to existing conditions. While there is pressure behind the scenes for councils to comply with those conditions, in the interests of fairness and justice surely all breaches must be treated equally.