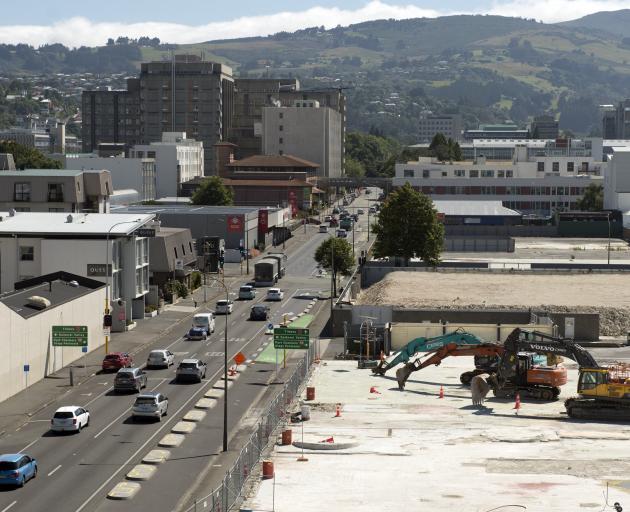 One-way system. PHOTO: GERARD O'BRIEN
There is no getting away from it. Huge numbers of vehicles must move through Dunedin every day.

This must be achieved relatively smoothly, and the Dunedin’s City Council’s preferred option to do away with the arterial one-way roads would stymie that.

Councillors, narrowly, this week pushed for a programme that would reconfigure the central city, introducing a northbound lane to the southbound State Highway 1 route and turning Cumberland St into a two-way local road.

This view has its advantages. It would improve pedestrian access and remove a main road from one side of the new hospital precinct. It is also described as transformational change, reconfiguring the heart of the city.

Fundamentally, though, it would cause huge traffic congestion and frustrate residents. It would create a barrier across Dunedin dividing the north from the south.

The plan is full of idealism about a world where many more people take buses and cycle and work, where the carbon footprint is reduced, where — supposedly — the attractiveness of the city as a place to live, work and play would improve.

But it would be a practical disaster.

In essence, the goals would be achieved via disruption. Residents would find it so much more difficult not just to have access to the CBD but also to drive from one end of the city to the other. They would be driven from their cars.

No wonder three-quarters of respondents to a transport agency survey in 2020 wanted the one-way system retained.

No wonder the agency, Waka Kotahi, which has the final say on state highways, backed retaining the one-way system in a decision made late last year.

Already, traffic snarls when just one lane of the one-ways is blocked – and not just at peak times. Already, the one-ways can barely cope.

Dunedin’s geography and history create the underlying problem — the narrow strip between the hills and the harbour. This difficulty is accentuated by the railway line.

Hopefully, while retaining the one-ways, efforts can continue to improve the route on the harbour side of the rail tracks, especially making it more attractive for heavy transport. However, diverting much of the through-traffic to that road would trigger serious choke zones at each end.

Good access from the north is essential not just for commerce and trucks but because the city is so integrated. Everybody from the northern suburbs and North Dunedin who wishes to travel south, to go to the airport, St Clair, Otago Peninsula, The Warehouse, Mitre 10 or Bunnings, St Clair, funerals, the Edgar Centre and so much else generally will travel on the one-ways in both directions.

Good access from the south is essential for the university and the polytechnic and for everyone heading north.

What, too, about all the freight and people wanting to simply pass through and not even stop in the city? The hills, the roads and the traffic are enough of a hassle and barrier as it is. There are no bypasses. As the funders and decision-makers for state highways, Waka Kotahi would have considered this.

Many Dunedin residents already believe a majority of councillors seem determined to fulfil a green agenda and force residents from cars via the likes of reduced parking and George St developments. The vote this week will accentuate this feeling. Look for such matters to become a key issue at the local government elections this year.

A council report discussing the options acknowledges a drawback in its proposal is that “journey times for drivers are less reliable”. In other words, if adopted the plan would make it much more difficult to travel from one end of the city to the other.

The hospital build has brought matters to a head, and — no doubt — traffic will need to be slowed in that area.

One-way arterial roads past the hospital and through the university are far from ideal. But they are the least damaging option.

This Editorial is spot on. Our population has been expanding year on year. More people + fewer streets = traffic chaos. As a hill city, with limited public transport, options for travel are limited. So the chaos is guaranteed. Simple maths.
Message to Council: if you punish people for that, then they will punish you at the next election. Perhaps you can understand *that* simple maths!

You are Nostradamus, perchance?

Forcing increasing numbers of people (who by the very nature of the hill city they Iive in, alongside limited/inconvenient/nonexistant public transport options, have no option BUT to drive) into an ever congested central city street arrangement (by design) is only going to result in one thing.
You don't need to be Nostradamus, or even particularly intelligent, to see that outcome.

Quite right. How anybody thinks turning Dunedin into a no-go zone is a good idea is beyond comprehension. Most users, and certainly all trucks and visitors, simply don't have the option of picking up a bike.

Yep, it's a shame the council don't see this simple fact and are determined to push an agenda. And I'm someone who likes cycle lanes!

We currently have 2 lanes of traffic going north and south on the one ways. From the plans I've seen, the 2 way option still has 2 lanes going north and south. Speed reductions are likely around the new hospital in either case. How will this cause chaos or 'drive' people from their cars? I know people can be impatient, but will an extra moment or two really cause them to give up driving?
Good access to the Uni and Polytechnic is important but it should be for more than just cars.
Every example I'm aware of cities becoming more attractive as a place to live, work and play has been due to improving walkabilty not driveabilty.
NZ has also committed to reducing carbon emissions. We should all be encouraging reduction in car usage. Its not idealistic, its a necessity.

Regardless of the mode of propulsion, be it internal combustion engine or electric motor, vehicles still need roads. Goods and people can't be moved by teleportation yet...

Maybe reducing the speed limit to 10 kph, and painting coloured dots on the road might help?

Wholeheartedly agree.
The ease of travelling around Dunedin is one of the great appeals of this city.
This council seems absolutely determined to push things through that the majority do no want. Is this how democracy is meant to work?

There's no way we're going to have the luxury of a casual commute across town in the future. Gas is getting scarce, prices will go up. Look at supply chain issues for basic commodities now ! Reality is that NZ is an island at the bottom of the world, Dunedin at the bottom of that... Planning needs to be done placing resilience as a key for our infrastructure... Who knows wtf kind of crises the future will bring. but we do know that, right now, the rest of the world is pretty desperate for what gas remains and Tesla's aren't trickling down to be a viable alternative anytime soon...

Of course, all 'residents' are drivers. While comments are accurate, there's an old Dunedin resistance to ideas.

I completely agree with the editorial! Well said!

"They would be driven from their cars." Wrong !!!
It will force more traffic into the university / Polytec area and up into Maori Hill
Less people will enter the CBD area
It will increase the value of parts of the city that continue to have good access amenities and devalue those that don't
There is a possible compromise
As you can see in the photo, the one-way system only offers two lanes for traffic
If the two-way thoroughfare provides two lanes in each direction, plus turning lanes, without being incumbanded with cycleways and parking, it might be able to do the job.
The expansion of the city core would offer many opportunities for inner city living and the owners would reep a big windfall

Really? Why? Why must huge numbers of vehicles move through the city every day? Because nobody wants to be inconvenienced? Because people who can walk, bike, or bus are just too lazy to do it? Because people have started to think that their privilege is a right and nobody better take it away? I think this editorial reflects a sad lack of imagination and ambition for our city. But it looks like the nay sayers have won this round and the cars and trucks will continue to take centre stage. When Ed is stuck in traffic next time, hopefully he'll remember that there was another way, and he added his voice to its sinking.