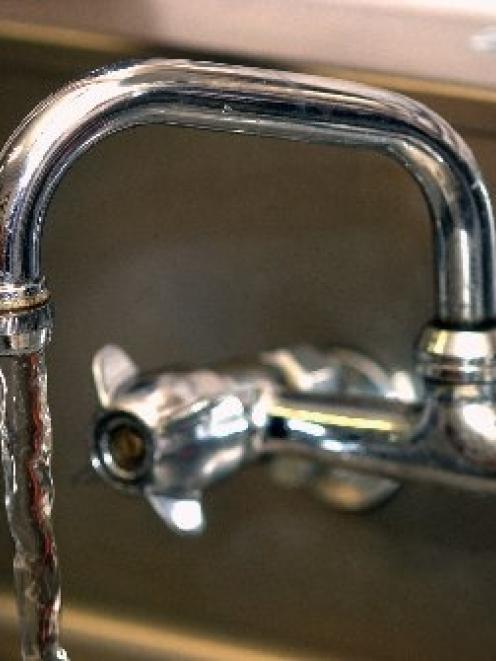 File photo by Jane Dawber.
In September 1860, the first public water pump was commissioned in Dunedin but it was not long afterwards that New Zealand's first major water supply project was initiated.

In 1867 the privately owned Dunedin Waterworks Company developed the Ross Creek reservoir and reticulation system, with a storage capacity of 51.7 million gallons and 115 days security of supply for the 15,000 residents in the lower parts of the city.

In 1875 the company was taken over by the Dunedin City Council.

Today, as a report to the council to be considered at this week's 2011-12 pre-draft annual plan hearings makes clear, water services in the city are the purview of the water and waste services business unit, a department of the DCC.

The unit employs 100 staff and is responsible for water delivery and waste water services to about 47,000 dwellings and businesses in the city.

It has an operating budget of $58 million, a capital budget of $31 million and assets valued at $1.6 billion.

The question exercising the minds of councillors this week is how the services now overseen by the unit can be most efficiently operated and future-proofed to provide cost-effective water services over the next 50 years or so.

This was the brief that the council asked the chief executive to report on in January 2009 as part of city's Three Water Strategy.

Following an investigation, including detailed analysis and modelling work on different options, by PriceWaterhouseCoopers, a report, Water and Waste Services Review: December 2010, was prepared and presented to councillors in a workshop last month.

This has led to a degree of consternation on the part of some councillors and members of the public who see in this as a first step towards the privatisation of water and water services, with the corollary of faceless corporations profiting at the expense of the private citizen.

Partly this is because, after all, water is one of life's basic necessities.

But such reactions often either ignore certain realities or trade on erroneous suppositions.

One of the realities critics tend to overlook is that water is not free: ratepayers already pay for it through a substantial rates impost.

One of the suppositions is that the formation of a separate legal entity, such as a CCO, is necessarily a step towards divestment and loss of control of a core resource and service.

In fact, as the report to council points out, a CCO remains under the control of the council, and unlike a CCTO is not expected to provide a return on capital.

Its main advantages, according to the report, is that a CCO would provide greater commercial discipline and focus, better ability to manage costs, improved efficiency of decision-making, access to specialist expertise and staffing, and certainty to the longer-term management of the assets.

Further, it is compatible with council's policy No W101/7 which states that "water and sewerage systems should remain in the ownership of the council either directly or as part of the council's operations or through an entity owned by the council and that the council is opposed to the privatisation of the city-wide water and wastewater services".

For all this, it does need to be asked why the so-called efficiencies that a CCO would bring cannot be achieved within a highly disciplined semi-autonomous council business unit.

It seems that one of the areas in which savings can be achieved is the tax advantages that would come with the CCO's status.

But the detail of exactly how mooted savings to ratepayers of up to $20 million over 10 years from such a transition are to be achieved is unclear.

Clearer is the report's assertion the water industry in this country is in a state of flux and that a CCO would result in superior "strategic positioning of a council-owned water utility" during a time of national reform.

Again, precisely what this means is opaque, and if there is altogether too much paranoia over the potential for privatisation of water supply in the recommendation of the report - particularly when the council's own policies expressly forbid this - some of the jargon it contains can only serve to encourage it.