Gloom continues to hang over National 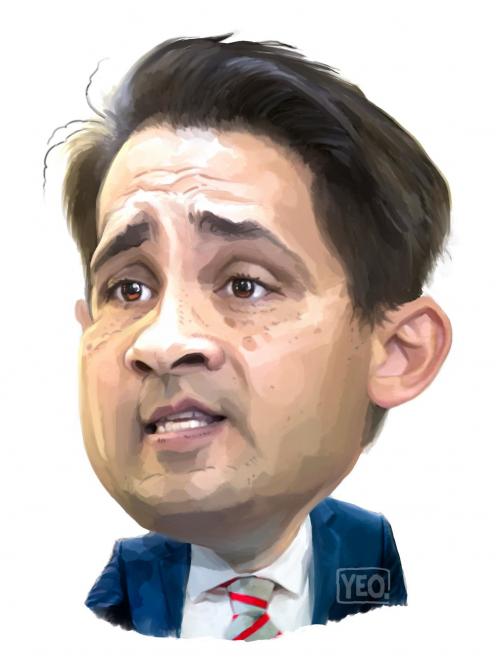 Simon Bridges. Illustration: Yeo
As if Judith Collins did not already have the toughest job in politics.

Today former National leader Simon Bridges releases an autobiographical book which he is adamant is not a political memoir, even if that part of his musings is the only one likely to attract much attention.

Certainly that is the chapter the publishers chose to release excerpts from prior to publication, and very little of what has been seen so far will cheer up the already deeply gloomy National Party.

Much has been spoken about the leaking, division and back-stabbing which preceded Mr Bridges’ ousting as party leader, let alone the subsequent muddle of the Muller interregnum and the inevitable electoral disaster Ms Collins was powerless to prevent.

National has tried hard in the months since Labour swept to its MMP-era unprecedented parliamentary single party majority to project a veneer of unity, but the revelations in Mr Bridges’ book dispel that already flimsy illusion.

It divides the caucus between ‘‘circling wolves’’ and ‘‘bedwetters’’, and paints a picture of internal chaos reflected in external pandemonium.

His parting shot: ‘‘I can see (former prime minister) John Key shaking his head in disbelief, now more sure than ever why he backs Chris Luxon and Nicola Willis,’’ is unsurprising.

While one book in itself will not change very much, it adds to a continuing narrative of instability and division.

It also means Ms Collins, who just rode out a potentially explosive party conference, will once more be answering questions about her future rather than on any suggestions National might have proposed to improve the future for New Zealanders.

Her MPs will face a similar inquisition, making it all the more difficult for the likes of Chris Bishop, Ms Willis and Dunedin list MP Michael Woodhouse, who have made valid points about Covid-19, housing and transport respectively in recent weeks, to gain any traction.

Their opposite numbers are not exactly covering themselves in glory, but have to do little to defend themselves.

The few parliamentary questions a week National gets seldom permit forensic scrutiny, and what progress National does make tends to be atomised by Grant Robertson’s bravura demolitions of the party’s infighting during his general debate speeches.

That said, Labour should not indulge in as much schadenfreude as it is over its main rival’s travails — it is not too many years ago that it endured similar trauma and should well understand that the right combination and leadership and policies can quickly transform a party’s fortunes.

Nor should Act New Zealand, which is assiduously manoeuvreing itself to lay claim to the mantle of main opposition party.

While David Seymour is indeed doing a commendable job in scrutinising the Government, the rest of his neophyte caucus needs to step up to avoid the perception that Act has more to offer the electorate than its effervescent leader.

Ultimately those who suffer the most from the ongoing implosion of the National Party, apart from its long-suffering loyalists, are the New Zealand public.

The parliamentary system is predicated on the Opposition placing the governing party’s policies and actions under robust scrutiny, and in a country where the courts cannot strike down unconstitutional laws an effective opposition party is all the more important.

As it stands, the party historically regarded as providing the most credible alternative to Labour is squandering its political legacy, and offering little to suggest National is a government in waiting.

Politics is the poorer for that.

The Government's incompetent vaccine delivery has put the country in grave danger. We need to spend a little more time focusing on the decision makers rather than worrying what the opposition parties are up to.

Vaccine delivery is the responsibility of the district health boards, not the govt. The DHB's are the decision makers in this case, they carry the can on this not the Govt.
And you're right, we are in grave danger, but not from the govt. Rather from the hundreds of thousands of complacent kiwis who do not use the tracer app technology or if they don't have a smart phone don't use the sign in registers required and provided in all establishments.
It's all very easy to blame the govt. But it would pay to think things through a little when you have limited understanding of how things work.

Change it - can you do one thing for the good of society: please, please stop listening to talkback radio & Hosking.
The vaccine rollout is quite complicated - things I bet you don't comprehend ie the refrigeration during transportation as the vaccine gets checked in at each refuelling stop, the storage on arrival, then that has to be repeated to get it to small town NZ, training the vaccinators. The logistics is horrendous. This rollout is something the nation has never done before and is utterly complex. It's not like the flu shot or the polio drinks of the 60s. The fact we have about 20 DHBs doesn't help, as those who are booked in for appointments don't turn up or on time. Did you know that once unfrozen this vaccine has a lifespan of 5 hours and we cannot afford any waste.
Now clearly as you're a Nat - can you tell me how Judith would have done better?? She would have had our border open with China & Aussie etc a year ago, no lockdowns and cheaper ineffective multiple type vaccines. Show sense.

Crusher (Judith Collins) does not have the toughest job in politics in NZ.
The Leader of the Opposition, in any parliamentary democracy, is the easiest job in politics. It's the epitome of the old saying "all care and no responsibility"
The reason Crusher makes the job so hard for herself is that she follows the dictum, "No care and no responsibility" and she hasn't the ability to modify it.