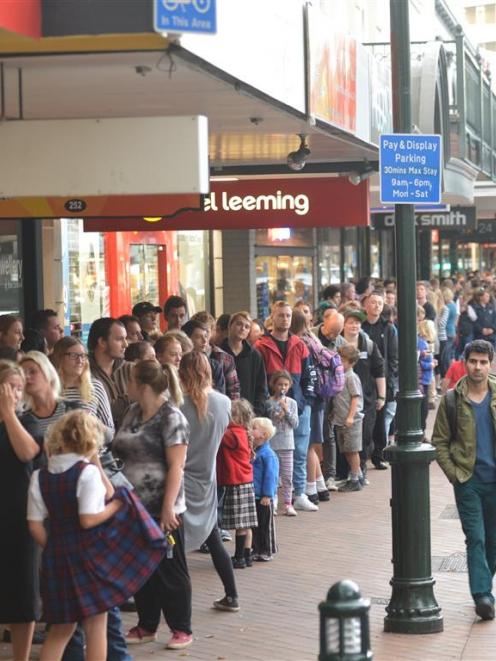 George St, in Dunedin. Photo by ODT.
A promising addition to Dunedin's revival was announced last week - the Heart of Dunedin group.

Formed and funded by a collection of George St business and building owners, the group aims to drag the spotlight back to a George St shopping precinct it says is dowdy, tired and in need of investment.

The group, led by Golden Centre Mall general manager Simon Eddy, plans to hire a manager, run events and lobby the Dunedin City Council to invest in the area from the Octagon to Frederick St, including St Andrew St.

They are to be applauded.

Instead of just pointing the finger at City Hall the group will roll up their own sleeves to improve their lot through private funding, ideas and energy.

Heart of Dunedin will surely have the city's full backing as they move forward.

However, another point raised in the Monday ODT report is harder to support.

In it Mr Eddy spoke of the group's strong opposition to small-scale retail being allowed in Dunedin's regenerating warehouse precinct.

It was "quite obvious'' some projects were getting more attention than others, while it was important Dunedin's centralised retail "point of difference'' be maintained, he said.

Moving retail out of the heart of the city would be a "slippery downhill slope''.

There are two problems with that line of thinking.

Customers are free to vote with their feet and their cash.

Retailers must adapt to be successful.

By doing so retail zones continue to renew and improve.

It is true the city's centralised shopping, without competition from suburban malls, is something to be celebrated.

Successive councils, often in the face of public criticism, have refused developments that could have threatened that centralised core.

The city, especially business and building owners in George St, is stronger for it.

But the warehouse precinct is just as much a part of the city's heart.

For many years Dunedin's economic pulse spread from the Exchange and Princes St.

Following a long period of underinvestment that area and the adjacent warehouse precinct is now being revitalised.

It is a revitalisation that, at very small cost to ratepayers, is bringing some of New Zealand's finest buildings and streetscapes back to life.

Few would argue the project is not in the city's best interest.

But the precinct's old buildings must pay their way.

Developers who have invested in them need returns on those investments.

Future investors need to see those returns and believe they can be replicated or improved upon.

How those returns are realised will vary; accommodation, eating and entertainment, services, commercial spaces, light industry and, yes, retail.

This is not something George St cheerleaders need fear.

Council investment in the warehouse precinct may well be giving that area an advantage at the moment and that advantage may lure some customers away from George St.

But significant public money has been spent on George St beautification projects over the years too.

Surely the George St retail area's path to solidifying itself as Dunedin's premiere shopping zone lies in adapting itself, not limiting the adaption occurring elsewhere.

Perhaps George St's future lies in it bringing to Dunedin what most European shoppers have enjoyed for decades - a long and beautiful pedestrian-only main street where shoppers, not traffic, are the priority.

Dunedin, in a wonderful period of economic and population growth, is blossoming into a genuinely envied destination.

The warehouse precinct is part of that.

While the Heart of Dunedin's push to promote George St is positive and deserves support, such a push must not come at the expense of the warehouse precinct's ongoing revitalisation.

You never know when