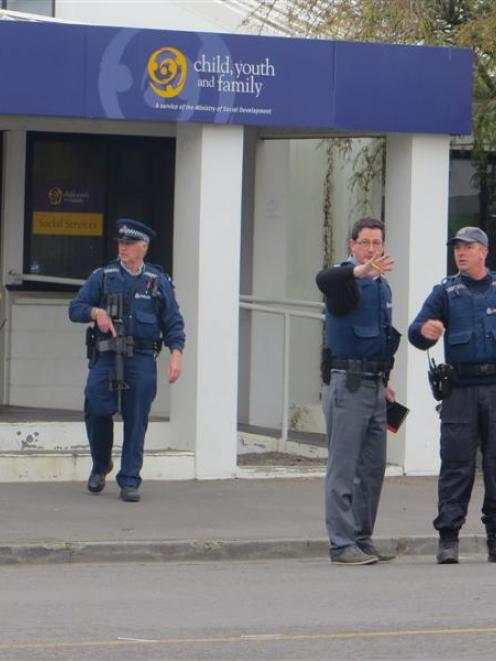 Armed officers outside the Ashburton WINZ office soon after the shooting last September. Photo by Ashburton Courier.
The prosecution of the Ministry of Social Development by WorkSafe New Zealand could prove a gamechanger for the public service and its workers - as well as private-sector employers - in this country.

The charge laid this week by WorkSafe, under the Health and Safety in Employment Act, is the ministry failed to take all practicable steps to ensure the safety of its employees at work.

It was laid in relation to the Ashburton Work and Income shootings last September, in which two people died and a third was badly injured.

That terrible day, two women went to work in an office.

They never returned home. Another was shot and injured. Many were traumatised. Families and friends lost loved ones; a community was left reeling.

Work and Income offices and other public service workplaces throughout the country, increased security measures.

A climate of shock, horror and fear prevailed.

For some close to the tragedy, the move by WorkSafe NZ has brought, once again, those awful memories and feelings to the fore.

Others have questions about the impact the findings of a court case may have.

Certainly, the outcome could have far-reaching consequences and the proceedings themselves will be widely watched in employment circles.

The relatively rare step means the Government is effectively prosecuting itself.

As a government agency, should it be found wanting, the ministry cannot be fined.

However, the court may order reparation to victims and their families.

If there have been faults made by the ministry, that would seem the least that can be done to help the victims' families.

By laying the charge, WorkSafe NZ is also sending an important message: that no employer is above scrutiny, that safety in the workplace is paramount.

If it is to hold those in the private sector to account (the likes of our most dangerous industries such as farming, forestry and fishing), the same must apply to the public sector.

Getting to the truth of the matter through the courts process is vital.

If there were systematic faults that allowed the incident to occur, not only should amends be made through financial reparation, but lessons must be learnt, any recommendations adopted and changes made so such an event hopefully does not happen again.

That will be the nub of the matter.

Many in the private sector - from the media, to retailers and businesses - have similar public interactions on varying levels.

And some jobs involve dealing with people who may be needy and vulnerable, have physical or mental health problems, be angry or frustrated, even openly hostile. Interacting with them requires meaningful contact.

But employees in the likes of Work and Income offices have long voiced concerns about verbal and sometimes physical abuse from clients in what can be an emotionally charged environment.

Employees should not fear what each day might bring, any more than the public should not feel alienated by what at times can feel like a dehumanising system.

But it is a fine line striking a balance between employer safety and public accessibility.

And how to mitigate against the reaction of any one person on any one day?

A court case may be the best way to get to the heart of the matter.

Through its investigation, WorkSafe believes the ministry has a case to answer.

An independent review of the shootings (led by former police commissioner Rob Robinson and Murray Jack, of Deloitte) found the ministry had taken all practicable steps to protect its staff, although it did recommend better security, training and information sharing, and found staff tolerance to abuse from the public was too high.

Ministry of Social Development chief executive Brendan Boyle has said the ministry accepted the recommendations and was addressing them; the independent report found the ministry co-operated with the investigation and ''has taken appropriate and proportionate steps since the Ashburton event to enhance staff safety''.

But if a court case has the potential to find still more can be done to protect frontline workers, it must certainly be heard.

Time for some deep breaths