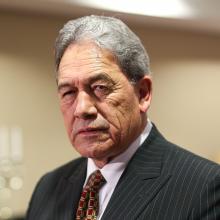 Mr Peters, his caucus and board decided to form a coalition with Labour, rejecting National, which  won the majority of votes in the September 23 election.

The decision will be cutting for National Party leader Bill English, who has now led his party to two defeats, although this time the party will be more forgiving. In theory, the largest party should have been able to start and control the negotiations. Mr Peters took that away from Mr English, and the results will not be lost on the nearly one million people who voted for National.

On paper, there was a vote for change, when all of the votes were added up. However, if there is ever was a hollow victory, this is it.

MMP always means there will be coalition negotiations  in which parties  concede territory and policies, but Mr Peters seemed to believe his 7% of the vote, and his nine MPs, were the most important part of what is now seen as the long-serving MP seeking to create a legacy.

The make-up of the Cabinet will now become the focus as the new government is assembled.Mr Peters has a long list of agreements with Labour, which Labour leader Jacinda Ardern will soon announce.

Mr Peters turned his back on National, possibly in revenge for several issues raised during the campaign, including the leaking of his personal superannuation information.

However, what Labour and Mr Peters now face will be a large Opposition party which will dominate select committees and policy.

National, even without Act’s one MP, will be able to stall legislation, even change it, before it goes back to the House for a final vote.

National will also be able to manipulate question time to its own advantage, something which is important to the make-up of Parliament, but not so much for the voting public.

The Green Party held  its membership vote last night but the party had already conceded  it had no real sway in the negotiations when Mr Peters refused to meet any of the MPs during the talks. The Greens may get some crumbs concerning environmental issues for  their loyalty, but Ms Ardern made it clear during the election she was prepared to burn the Greens if it meant Labour could cement a deal with NZ First.

New Zealand is in for a significant change in direction in policy. Social policy will be front and centre of the new government. Ms Ardern has made it clear she wants to end child poverty. She will face a huge task ahead. If, as Mr Peters suggested last night, a financial downturn is on the way — despite the latest reports indicating economic growth to continue through to the next election — Ms Ardern and her Cabinet will be truly tested. She will need to be strong  not to be swayed by past thinking promoted by Mr Peters from his days as  treasurer in a former government.

Ms Ardern will need to show New Zealand she is as strong as she says she is and she can control Mr Peters in a similar fashion to former prime minister Helen Clark.

Inexperience dominates the Labour caucus and,  while fresh thinking may be needed for New Zealand, caution needs to be exercised.

The popularity of Ms Ardern means there will be a long period of grace. Her previous backdowns,  on things such as capital gains tax, will be long forgotten. She set an ambitious target for the first 100 days of Parliament. Tax cuts for the so-called rich are off the table, as is raising the age of entitlement for superannuation.

Ms Ardern will need a will of steel, not stardust, to continue with her plan for New Zealand, rather than being diverted through any political sideshows caused by  her coalition partners  or a wounded National Party.

I've read happier opinion. An obstructive, manipulative Opposition would be simply 'the sulks'. The headline is accurate: the mood for change.

New Zealand is going to say to China, we don't want your people or your investment but we do want continued tariff free access for our dairy products. Winston Peters knows there will be negative trading consequences for NZ hence the dark tone in his speech last night.

Really? Dark toned he was, but not about the new government.
Trade with China, conditions over immigration and property buy up will be a matter for negotiation. The change will simply be 'open slather' is over.