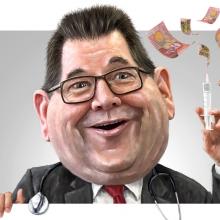 The House of Representatives fell silent as he offered a $50billion salve to the worst economic and social effects of the global Covid-19 pandemic. The real bustle was outside, where New Zealanders emerged from their bubbles to start revitalising their communities.

His Rebuilding Together Budget was presented as a start, too. Some $20 billion remains unallocated, a fighting fund to respond to whatever happens between now and the end of the financial year.

Much of the success of this Budget depends on external forces — export receipts, commodity prices, the cost of borrowing, even the chance Covid-19 might burst our bubble with Australia — but the Budget must establish certainty, regardless.

Certainty is key: every day between now and whenever there is a vaccine for Covid-19 and the world economy creeps through recovery presents a vast and unquantifiable range of social and economic unknowns.

Some unknowns became known yesterday. We learnt Treasury expects unemployment to reach 9.8% in September, more than twice what it was before the pandemic, and for the Budget spend to save 140,000 jobs over the next two years. Prime Minister Jacinda Ardern hopes it will bring unemployment to 4.2% within two years, roughly where it is now.

Before that can happen, the Government hopes a $3.2 billion eight-week extension of the wage subsidy scheme for businesses that take a 50% hit to revenue will slow the rate at which New Zealanders find themselves out of work.

It will take time, likely longer than the extension period, for business to return to normal. Few will operate at full capacity while demand, social distancing and consumer confidence provide impediments.

The South’s tourism sector has been worst hit by the global pandemic but it found little certainty in the $400 million targeted tourism support fund. Its most significant short-term relief will largely come from the wages subsidy scheme. Other promises are tinged with a degree of "wait and see": the extent to which a domestic tourism campaign might stimulate business in a country beset by recession remains unknown. A task force will help shape the future of tourism, but there are grave fears attrition will beat it to it.

The Government will consider further support further down the track. Southern tourism and regional leaders must now ensure workable solutions are identified and quickly made possible using the Government’s sizeable fighting fund.

There is new money to help other exporters get back into international markets, and the promise to help them "leverage off" New Zealand’s success fighting Covid-19. The country has a new brand and, the Government hopes, new opportunities.

The $3 billion spent on infrastructure ought to provide a direct stimulus to jobs and regional economic activity. If the Government can finally deliver on its housing plans, the $5 billion it borrows for another 8000 state houses will be a direct investment in local trades.

More than $2 billion will pay for a new apprenticeships programme, on tertiary enrolments and to help employers train and keep apprentices. At last, there will be significant investment in the skills that can help refocus — and rebuild — our economy.

And be in no doubt our economy will need refocusing. The Government’s books

National Party leader Simon Bridges says repaying this debt will either mean more taxes, or a legacy of sluggish growth. Either might be true but, as new spending announcements loom, we must demand careful stewardship to ensure the legacy is worth the risk.