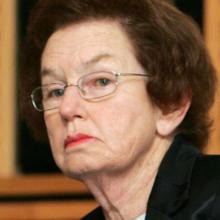 Dame Margaret Bazley
Predatory male behaviour is being exposed more this year than is possibly the case in all of history. Women who have faced unwanted pawing and sex have had enough.

Last week, Dame Margaret Bazley laid bare the abominable behaviour that took place in one of New Zealand’s top-ranked law firms. Dame Margaret found appalling behaviour such as bullying was limited to particular pockets within Russell McVeagh, which employs more than 350 people in its Auckland and Wellington offices.

Decisive steps are needed  to stamp out such behaviour.Dame Margaret made no finding whether claims of sexual harassment and assault were proven but said Russell McVeagh handled the incidents poorly and failure had serious consequences for people involved.

There were two types of reaction from women in New Zealand following the report. One  was a warning to powerful men about starting to feel nervous about past deeds. Women should not doubt that speaking about sexual harassment and assault can bring about change.

Prominent lawyers Catriona MacLennan and Olivia Wensley, who have fronted calls for change, say the Bazley report glosses over the worst behaviour, leans too heavily on alcohol as a catalyst — as opposed to exploited power imbalance — and does not go far enough in calling for sanctions of the firm or the alleged perpetrators.

The matter is now in the hands of the Law Society and  Russell McVeagh, two entities which have been minimising and downplaying the incidents. This will hardly inspire confidence or trust in the public watching events unfold.

Justice Minister Andrew Little is to study the recommendations.

The #metoo movement is naming and shaming alleged male gropers around the world. There was a start to the campaign in New Zealand but it seems to have quietly faded away, hopefully because of a lack of candidates — how unlikely that may seem.

It is not just young women at risk as allegations against gay male movie star Kevin Spacey prove. Some predatory males become leaders in youth groups with the intent purpose of grooming boys. This is sickening and may be one of the reasons some of these groups are faltering as numbers fall.

Allegations have been made about inappropriate behaviour at a Labour Party youth camp, the consequences of which will now be played out in court.A report out late last week indicated some in the police are guilty of covering up charges of abuse perpetrated by some of their colleagues.

On that note, the new Deputy Commissioner of Police Wally Haumaha’s appointment is coming under scrutiny. Mr Haumaha was friends with the men accused of raping Louise Nicholas and he continued to support them after the scandal broke.

Mr Haumaha is being given credit by those who know him for helping change the culture in the police. His previous behaviour has come back to haunt him, underscoring the need to find a place where a line can be drawn if someone proves rehabilitated.

However, it is the behaviour powerful males display to young women which continues to disturb the general public. Parents of current law students will now be wondering what their daughters will face if they get accepted into a large law firm. Apart from the long hours for relatively low pay, their daughters may have to be on full alert against overtures from older entitled men.

This cannot and must not continue. Those receiving unwanted attention must feel confident to stand up and speak out. They must also feel protected in the process. As a nation, we cannot step aside from the duty all of us carry to protect each other from atrocious behaviour.