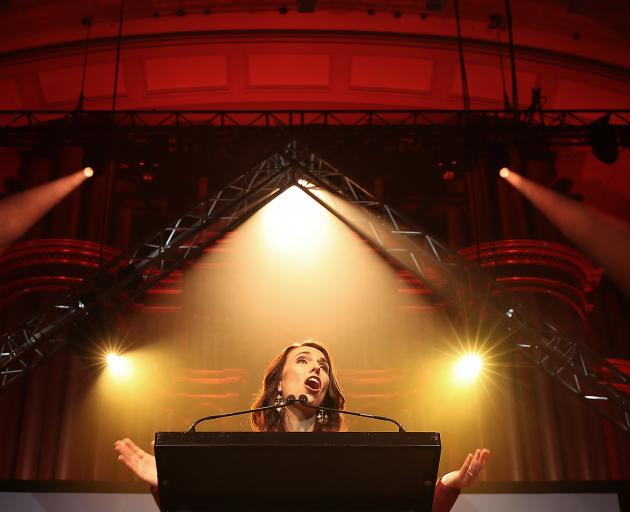 Photo: Getty Images
Labour and Jacinda Ardern have crushed Judith Collins and National in an extraordinary election. Labour won sufficient seats to govern alone, unprecedented since MMP began in 1996. Even National’s John Key did not achieve this absolute majority.

The “transformation” was remarkable. Labour, under Andrew Little, was languishing in the polls about 24% only months before the 2017 election. And only seven months ago, National was still polling between 40% and 45%, even with unpopular Simon Bridges in charge.

The rise of celebrity communicator Ms Ardern has been phenomenal. Her responses to the mosque killings are acknowledged as exemplary and her Covid leadership was outstanding. She continued in a similar style on Saturday night.

Now, of course, comes the challenge of the next three years. Ms Ardern and Labour are vulnerable to accusations of sweet talk and little action, of non-“delivery”. Housing issues have magnified, child poverty is worse and the mental health crisis is as bad as ever.

Already, even before the Left’s euphoria dampens, rumblings surface that Labour needs to show starch, be decisive and use its political capital to make a real difference.

These expectations, however, will need to be tempered because this is not the Ardern way.

On Saturday night Ms Ardern reached out to those who did not vote for Labour as well as those who did so for the first time. We must listen to the point of view of others, she said. She warned of the polarisation that is plaguing much of the West. We were told that change “that sticks” is the way ahead.

In other words, Ms Ardern — and she sets the tone as the undisputed queen of Labour who led it from the wilderness and reigned over this triumph — will not be radical. She avoided such talk in her carefully framed speech. Ms Ardern is no revolutionary at heart.

She was true to her nature in those remarks. While strong, she comes across as compassionate and conciliatory, and who can doubt that.

Even if the image of the “kind”, benevolent, thoughtful monarch is in part an act by the mistress of empathic communications, that persona feeds back on itself. Ms Ardern has staked out a distinctive style.

Naturally, Ms Ardern is aware of the criticism of her nice-talking, do-little government. Hence, also, the emphasis on “cracking on” with policy.

Labour will be able to insist on cameras on fishing boats, to proceed with more of its employment relations plans and move on various fronts without the New Zealand First “handbrake”.

Although their personalities differ, Ms Ardern will endeavour to drive change in the Helen Clark “incremental” manner. While the occasional jolt will shift the dial left, progressive agendas will be enacted progressively, step by step.

Soon, such change accumulates and makes a difference — for better or worse depending on the perspective. And only if such changes “stick”, will their legacy last.

Winston Peters helped keep the last government anchored close to the middle of politics. Labour benefited from that as it swept across the country and assuaged the fears of swaths of potential support. Labour could, for example, blame New Zealand First for the ditching of the capital gains tax.

The convenient excuse is gone because Labour has the numbers. Ms Ardern and the party can take responsibility for both its actions and inactions.

Politicians like to pronounce, as they win, that they will govern for all people. But this ideal will be nearly impossible to fulfil even for Ms Ardern. There are winners and losers and conflicting interests when the pressure of policy, politics and spending priorities are applied. Even with the best intentions, Ms Ardern’s road ahead will be bumpy with lots of rocks and potholes.

Some of them dug and strewn by the Right.

The myth of Labour 'niceness' began when Jacinda called for 'kindness' after nationwide shopping altercations at the first lockdown.

This perception became a trope, from people who prefer masculinist direction and conflict. Argy, they seem to think, is the way to manage people and the economy.
The 'she's too kind' brigade is not relevant.

The world dread nothing so much as being convinced of their errors.

World don't enter into it and the opinion of Hill's Hoists is not imprimatur.

Sometimes it's better to react with no reaction; nihil obstat.

Journalist Karl Du Fresno raised concerns during the campaign that a TV3 Political News reporter had crossed the line from reporting the news to be being a Labour Party activist. There are elements about the TV media coverage of the election campaign that raise concerns.

It's almost like a dictatorship now with ardern and labour in charge of every aspect of our lives!

I also recall many a scandal in the Labour Party over the last 3 years. Time to move on and no doubt it will not be long before another MP gets into strife.

They are politicians, that's what they ALL do!

If we think the world has no sense, we are still free to enjoy all the imaginable nonsense.

Stop boasting about handling the Covid virus - you're so far behind Vietnam it's not funny!
25 deaths in NZ, 35 in Vietnam which has 95 million people.

Queen jacinda, your avin a larf, identity politics is what we have witnessed.

The media coverage of politics in New Zealand needs a Royal Commission acting completely independent of all government interference. Media outlets became so aligned to political parties that they were more promotional that the paid party advertising AND all of this promotion was undeclared in terms of party donations. In a world of populist personality politics, promotion is everything. When we see other countries allowing unregulated spending on political promotion our media outlets react. When we see other governments channelling government money into self-promotion the media call it corrupt. When we see the same things happening in New Zealand, all the media outlets align with where they can sell the most advertising revenue.