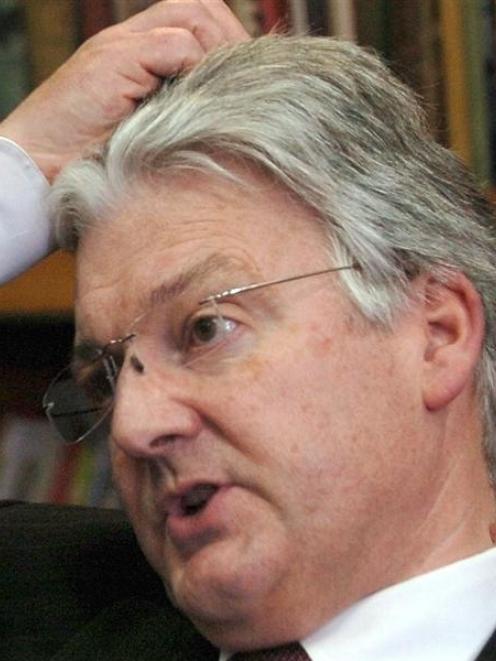 Peter Dunne
The leaking of a sensitive report on New Zealand's spy agency to a news media organisation has obviously had major consequences for those directly involved - and for those on the periphery.

United Future founder Peter Dunne yesterday resigned as revenue minister after not meeting all requests for information from the David Henry inquiry into the unauthorised disclosure of Rebecca Kitteridge's compliance review of the Government Communications Security Bureau ahead of its public release.

In a statement yesterday, Mr Dunne denied leaking the report and challenged Fairfax Media to confirm that.

But someone leaked the report, and only 35 early copies were distributed. If Mr Dunne did not leak it, who did? That question ostensibly remains unanswered.

Mr Dunne has gone so far as to admit his actions after receiving an advance copy of the report were extremely unwise and lacked the judgement ''reasonably'' expected of a minister in such circumstances. Yesterday, he did not outline what those actions were, and said the reason he did not disclose the full content of his emails was because he believed citizens, whether the public or journalists, should be able to communicate with elected representatives in confidence.

For his part, Mr Key told Mr Dunne he was ''very shocked'' by the Henry report. The Prime Minister said Mr Dunne had at a meeting on Wednesday night assured him his relationship with the female journalist in question was ''totally professional''. The fact Mr Dunne has spent 29 years as an MP without a hint of scandal must be considered. If Mr Dunne's intentions are truly about stopping the monitoring of private emails, then his actions are commendable. But failing to release them raises issues that will continue to swirl at least until the next election. He reportedly released edited versions of 44 emails, but there are a total of 86 which Mr Henry wanted to examine.

Mr Dunne indicated he will stay on as an MP and continue to support the Government, including on key legislation such as the SkyCity convention centre deal. National will continue to work on policy issues with Mr Dunne, Mr Key said yesterday. But Mr Dunne needs to make a tough decision - and soon - on whether to stand at the next election. National has made electoral arrangements with Mr Dunne in Ohariu, where the National candidate campaigns only for the party vote. National must now surely put up a candidate prepared to win the electorate, or public distaste for deal- making will only increase.

As news of Mr Dunne's resignation broke yesterday, one thing at least became obvious: regardless of ''whodunnit'', the pressure has ratcheted up sharply on the John Key-led Government.

The Green Party came out strongly, saying Mr Key is having to cobble together a coalition of the disgraced. With Act New Zealand leader John Banks facing charges in court regarding donations, the Green MPs have a point.

Certainly the GCSB leak and its fallout is a major embarrassment for the Government - and Mr Key. While he may not need Mr Dunne's vote to remain in power, even the assurance of doing business with the MP, who we must not forget does not at present have a registered party to lead, will lead to allegations of tainting the democratic process.

If there was a winner yesterday, it was New Zealand First leader Winston Peters. Mr Peters has kept up unrelenting pressure on Mr Dunne to resign over the issue of the leaked report. Mr Peters will now look around and see that apart from the Maori Party, NZ First is in a prime position to play a prominent role in the formation of the next government - something he has done before. The Maori Party continues to bicker about who should be the leader, and with one co-leader retiring and the other facing a much invigorated Labour candidate next year, there are no guarantees the party will survive to help National.

One last question - who provided details of Mr Dunne's error of judgement to Mr Peters? Someone provided Mr Peters with enough information to tackle Mr Dunne in a select committee and the House. Mr Peters is playing a long game. He can now be expected to go after other targets in Parliament. Someone has already helped him secretly. Will they do it again? Rest assured, politics remains a murky business.