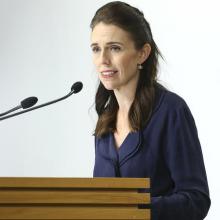 Jacinda Ardern. Photo: ODT files.
In a prime ministership where there have been no shortage of difficult decisions to be made, Jacinda Ardern made arguably her hardest decision yet yesterday — to delay the general election.

On the surface, this looks like a simple call.

With Auckland at Covid-19 Alert Level 3, the remainder of the country at Alert Level 2, and uncertainty about how long that pandemic preparedness status will remain, public health considerations were surely paramount.

However, the Prime Minister is a politician, the decision when to go to the polls is a political one, and there were strong arguments both in support of staying at September 19 or moving to a new date.

September 19 was announced as the election day months ago and an enormous amount of planning had gone into organising polling before and on that day — not the least being the contracting of 25,000 staff and hiring of hundreds of polling places.

The Electoral Commission, commendably, had revised all that work following the advent of Covid-19 and was confident that it could deliver a credible election even with the country at its current alert levels.

With Parliament having adjourned, the placards up, some election launches having already been held and some policies released, surely it made sense to let things run their course?

Those parties which called for postponement had to face accusations of opportunism; both National and New Zealand First are polling poorly and perhaps had the most to gain from delaying voting day for as long as possible to allow them to recover lost ground.

Mr Peters, in particular, made a fervent call for a deferment of the election.

While his sincerity in wanting an election that is beyond reproach is entirely reasonable and a view all would agree with, the letter he sent Ms Ardern on Sunday could have been the catalyst for profound constitutional issues had Ms Ardern chosen to stick with September 19 and Mr Peters then felt he had lost confidence in the Prime Minister.

Ms Ardern’s decision to move the election by four weeks lances that possibility, but also opens her up to the claim that Mr Peters forced her hand.

The Prime Minister confronted that head-on yesterday, saying the decision to move the election was hers and hers alone.

With the country’s biggest city in partial lockdown and the rest of New Zealand on tenterhooks, Ms Ardern wanted the country’s focus to remain on combating the virus rather than the battle on the hustings.

All along, Ms Ardern has taken a cautious approach to the threat posed by Covid-19, and in the decision to move election day to October 17 she maintained that stance.

The limits of the current Covid-19 cluster in Auckland and Tokoroa are yet to be ascertained, but the window of opportunity provided by a four-week delay to the election gives time to either stamp out the current flurry of cases, or if the signs are unpromising, for the Electoral Commission to make provision for alternative voting methods.

It also allows political parties, who are all well aware of how crucial Auckland’s voters will be for their electoral chances, to find ways of getting their policy positions across to them, and the rest of the country for that matter, in a way which does not compromise public health.

Ms Ardern’s commitment that the election will be on October 17, and that she will not change it, both provides certainty and meets the legal requirements for when an election must be held.

It is to be hoped that the date need not shift again: after the issuing of the writ for the election on September 13 that assessment of need is outside the Prime Minister’s hands and rests with the Chief Electoral Officer, who will no doubt be fervently hoping Covid-19 remains in check and no further disasters befall New Zealand.