Warning from the French election?

France, Europe and the world can breathe more easily now that Emmanuel Macron has won the French presidential election.

His opponent in the runoff, Marine Le Pen, might have softened her hard-right image, but fears she would run Mr Macron close proved unfounded.

Her relative success, however, is another warning about politics, including the kickback from voters who feel a political, media and social elite run the show.

Labour and the liberal professional classes in New Zealand should also take note. Many New Zealanders are rejecting the parties they might have supported in the past. Some are sceptical of the changed woke world where their traditional attitudes are rejected. Some feel excluded or resentful.

The most obvious global examples of such responses have been in the support of Republican Donald Trump in the United States and Brexit in the United Kingdom.

The US Democrats have steadily been losing ground in their traditional heartlands, the former industrial zones, especially among men bewildered by change and upset by the undermining of their secure place in society.

The Conservatives in Britain, too, have won many former Labour constituencies, especially in the north and northeast. It was these areas, sadly with the most to lose from Brexit, who voted in higher numbers to leave the European Union.

It did not matter that this would not be in their personal interest.

They, in parallel to their American counterparts, could vote against London and progressives. They could rebel against being told what to think and be.

Mr Macron, still only aged 44, came to the presidency five years ago outside the French conventional mainstream centre-left and centre-right. He promised a fresh approach and his party also prospered. 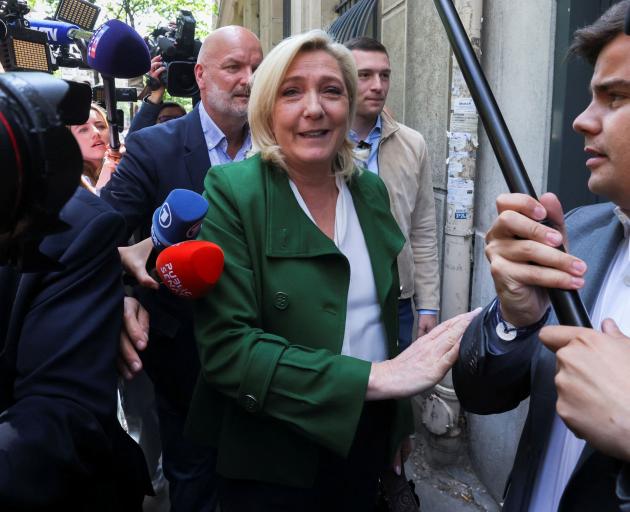 Marine Le Pen. PHOTO: REUTERS
He has seen the need for economic reform, but his moves to increase labour-market flexibility and increase the retirement age from 62 — both designed to make France more competitive — drew vehement opposition.

He came to be seen as aloof and arrogant and out-of-tune with everyday French concerns.

The preliminary presidential run-off election saw him gaining only 27.8% of the vote. Candidates from the far right and far left won 57%. Divisions in France have become stark.

Mr Macron won the final run-off 58.2% to 41.8% (it was 66% to 34% in 2017) and had the rare distinction of being a re-elected president. He won most support as the least bad option, especially from those who could not stomach Ms Le Pen. But voter turnout was the lowest since 1969.

As is commonplace for politicians after an election win, Mr Macron says he is about healing and bringing the country together. Indeed, he may well pull towards the left to be more acceptable to wider numbers.

Everyone is also looking to the French parliamentary general elections in June. Mr Macron will be fighting to retain sufficient support to pass domestic policy.

Ms Le Pen has appeared less radical in part because of another party further to her right. She has also concentrated on bread-and-butter issues, notably the cost of living rather than the likes of her party’s policy to ban Muslim headscarves in public.

Such is the change that many more French people are not embarrassed to say they voted for Ms Le Pen.

But she has been dogged by her past support for Russian President Vladimir Putin and links to Russia.

Fortunately, France was not ready to go along with her nationalist ideology.

Her strong showing as well as that earlier of the left-wing Jean-Luc Melenchon, nevertheless, illustrate deep and worrying fractures in France.

It's a bit alarming that men might be attracted to the Far Right over piqued insecurity.