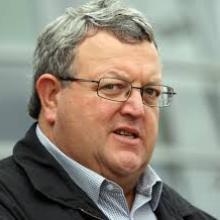 Gerry Brownlee.
Japan is on a collision course with New Zealand Foreign Affairs Minister Gerry Brownlee who yesterday expressed his concern about it trying to overturn a long-standing global moratorium on commercial whaling.

This newspaper and most New Zealanders will wholeheartedly agree.

New Zealand will continue to reinforce its support for the moratorium on commercial whaling, which has been in place for more than 30 years.

The recent departure of Japan’s whaling fleet to the western North Pacific once again goes against the recommendations of the International Whaling Commission, its scientific committee and its expert panels.

Earlier this year, Prime Minister Bill English expressed significant disappointment to Japan about the country’s whaling in the Southern Ocean.

Mr English’s comments in January came after the activist group Sea Shepherd published a photo it said showed a Japanese whaler in the Australian Whale Sanctuary with a dead minke whale on its deck.

The International Court of Justice ruled against Japan’s whaling operations in the Southern Ocean in 2014. The case was brought by Australia.

New Zealand and Australia have worked for many years to protect whales and engage with Japan to try to change its attitude. This has been unsuccessful.

In March, a Japanese whaling fleet returned to its home port after an annual Antarctic hunt killed more than 300 of the mammals.

The fleet set sail for the Southern Ocean in November last year with plans to slaughter 333 minke whales, flouting the worldwide moratorium and opposition led by New Zealand and Australia.

At the time, Japan’s fisheries agency issued a press release describing the mission as "research for the purpose of studying the ecological system in the Antarctic Sea".

Environmentalists and the International Court of Justice call the statement a piece of fiction.  It is indeed, being a blatant and feeble pretence for continued and outrageous slaughter.

Mr Brownlee concurs with the research "fiction", saying Japan is persistently failing to justify the need to kill whales in the name of research in both the North Pacific and the Southern Ocean.

Japan’s actions risk seriously undermining co-operation within the International Whaling Commission, which New Zealand continues to support as the forum to manage these issues.

The commission was established in the 1940s as the body responsible for the conservation and management of whales. Under the commission, to which Japan is a signatory, there has been a moratorium on hunting whales since 1986.

Tokyo exploits a loophole allowing whales to be killed for "scientific research" and claims  it is trying to prove the population is large enough to sustain a return to commercial hunting.

But it also makes no secret of the fact whale meat ends up on dinner tables and is served in school lunches.

Japan continues to ignore global opinion and the commission in its quest for whale meat.

Japan has hunted whales for centuries and their meat was a key source of protein immediately after World War 2 when the country was desperately poor. Consumption has dramatically fallen in recent decades and significant proportions of the population say they never or rarely eat whale meat.

Mr Brownlee has laid down a challenge to Japan and it is important he, and the Government, follow through on their disapproval. It is obvious talking to Japan has little or no effect. Tokyo continues to thumb its nose at global distaste for its ongoing slaughter of whales.

Mr Brownlee must firm up  his actions to prove to Japan how serious our Government regards its pretence.