What 'man up' really means 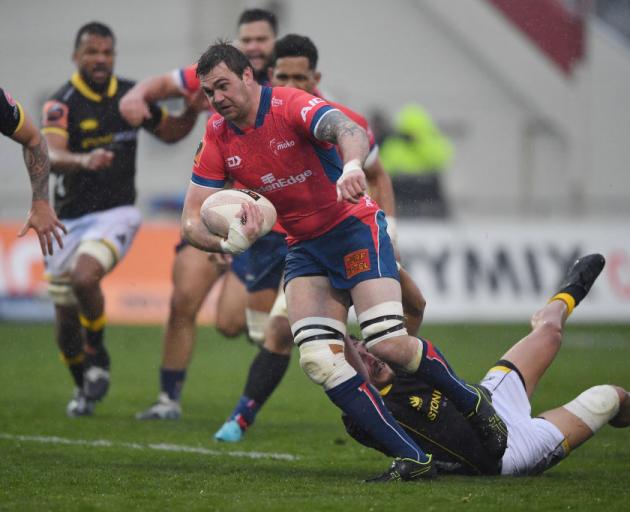 Liam Squire in action for Tasman. Photo: Getty Images
There have been plenty of courageous All Blacks over the years.

In fact, ''courage'' has arguably gone hand in hand with words like ''talent'' and ''commitment'' and ''pride'' when it has come to assessing the impacts of various players in our most prominent and successful national sporting team.

It is just that, mostly, those descriptions of examples of courage have referred to physical performance: Colin Meads playing on with a broken arm, Buck Shelford getting a certain part of his anatomy stitched up before returning to the field, Richie McCaw winning the World Cup on a broken foot, Jonah Lomu running over Englishmen. Tests of manhood, of guts and sheer strength.

Sure, there has been praise dished out for coolness under pressure, for resilience, for poise and nervelessness and clutch and ice in the veins and ''the top two inches''.

But, by and large, it is the physical deeds of our beloved All Blacks that have earned them the most praise.

That is why it feels so momentous to hear an All Black - not just an All Black, but an ''enforcer'', the epitome of physical strength - opening up about his mental health.

Liam Squire referred to his ''tough year ... mentally and physically'' after taking himself out of the reckoning for the Rugby World Cup.

Later, on social media, he uttered what may go down as one of the seminal phrases in All Black history: ''For me, mental health is a lot more important than playing rugby.''

Imagine a young male or female rugby player, battling some demons, reading those words from a man in black, and taking heart from such honesty. Perhaps Squire will not immediately realise it, but the Highlanders and Tasman loose forward has become a role model for far more than his wrecking-ball style of rugby.

The importance of mental health in a sport like rugby was not always well recognised, though the All Blacks have actually helped lead the way.

Gilbert Enoka has long been attached to the national side as a mental skills coach, and fringe players like Ben Atiga and Zac Guildford have spoken about their various off-field battles.

The current generation has undoubtedly been influenced by Sir John Kirwan, whose tireless campaign for raising mental health awareness has surely made the modern-day player more comfortable in asking for help.

As admirable as Kirwan's work has been, there is something striking about an All Black revealing mental health concerns while still wearing the black jersey.

Squire seems an uncomplicated bloke on the field - he is from the old-fashioned, up-the-guts school of rugby, and that is one of the reasons he has become such a key part of the All Blacks when he has been fit.

But, like all of us, he has more going on than can be seen on the surface.

His honesty, intelligence, self-awareness and sacrifice are to be applauded.

Whether we see him in an All Black jersey again or not - Squire will only be called up for the cup if there is an injury and he feels ready, and he is leaving New Zealand rugby after this season - he has made a serious impact on the sport.

'Do you feel you have Let Down The Jersey?' must go as a line of questioning.