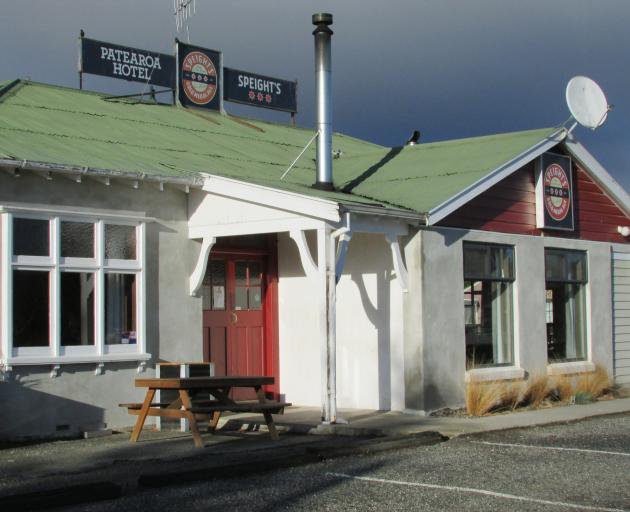 "A day of clouds and thick darkness". Zephenia 1:15. The Patearoa Hotel during its closure. PHOTO: SUPPLIED
From your deep knowledge of the Bible you will recall Revelation 4:1 which kicks off with, "I looked, and behold, a door standing open in heaven! And behold, a throne stood in heaven, with one seated on the throne. And he who sat there had the appearance of jasper and carnelian, and around the throne was a rainbow that had the appearance of an emerald."

And on it goes, rather like a pamphlet for a 5-star tourist hotel. Later in the Bible (perhaps Luke or John, or maybe in the ads at the back) is the story of the man who arrived at the Pearly Gates during renovations and was greeted by a "Closed" sign.

He was a good man and his sins had been only venial. Tickling the till, playing around with his secretary. You know the sort of thing. The man was devastated to find the gates of heaven closed to him but a bearded attendant wearing a badge announcing himself as "Concierge Peter" came to the gates and told him, "Be not downhearted for your booking is confirmed. During the renovations you will stay at the Purgatory Hotel just across the clouds. It's only 3-star but exceptionally clean and with a beautiful beer garden."

In time the good man did enter the refurbished heaven and, as far as I know, is still there, quite satisfied with the service and accommodation provided. Although, like many older patrons, not so keen on the constant racket kicked up by groups of harpists.

Recent events reminded me forcibly of this biblical drama and the way the Good Book has of foretelling the future. For did not Acts 20:30 warn us of the coming of Donald Trump? "And from among your own selves will arise men speaking twisted things, to draw away the disciples after them."

Even closer to home, the biblical story of heaven's closure echoed just what's been happening in Patearoa. The pub closed a year ago and at first the believers thought it would be only a short intermission. Various tyre-kickers were seen inspecting the place and we heard of offers being made but nothing happened. Soon, as the citizens of Patearoa ventured to the metropolitan centres like Ranfurly and Naseby they would be quizzed. "Is it open yet?" "What's the story at the pub?"

But the response was always a rueful shake of the head and a mumbled, "Nothing yet." An optimistic Naseby Bible-basher attempted consolation with Job's "I will forget my complaint, I will put off my sad countenance, and be of good cheer."

But time passed and the Patearoa faithful took to holding a weekly service in Ken's garage and making a Tuesday pilgrimage to the Waipiata pub where the gates had not been closed against them. The publican there had placed on the wall, just below the poster for the "Pie and Pint" special offer, a quote from Isaiah, "And your gates will be open continually; They will not be closed day or night."

And then, just a month or two ago, came the Good News, just like Mark's gospel predicted: "The Spirit of the Lord is upon me, because he has anointed me to proclaim good news to the poor. He has sent me to proclaim liberty to the captives and recovering of sight to the blind, to set at liberty those who are oppressed."

Translated, which is a necessary part of understanding the Bible, what Mark was saying was, "a young couple have taken over the pub and it will be refurbished and offer shelter and company to those sheep who are lost". Of course, sheep are rarely seen actually inside the Patearoa pub, but we knew what Mark was on about.

The weeks passed and the questioning from the intellectuals of Maniototo became more insistent and more frequent, and the answer more hopeful, "Soon. Soon."

In October came what they call in the trade a "soft opening". A "Locals Night" when just about the entire village turned up, even the women who lead the temperance movement. Good food and good company and, if you insisted on having a drink, it was cheerfully provided.

Then last Saturday came the official opening and one of the faithful among us interrupted his monologue about the woeful All Blacks to quote the words of a great biblical scholar: "The kingdom of darkness has been overthrown, Satan has fallen as lightning from heaven, and the triumph of truth over error, of good over evil, of happiness over misery is for ever secured."

That was hard to beat but, as the local know-all, I was asked to comment. I simply referred the faithful to Jim 1:1: "And the pub shall be open again, and joy will be unconfined."