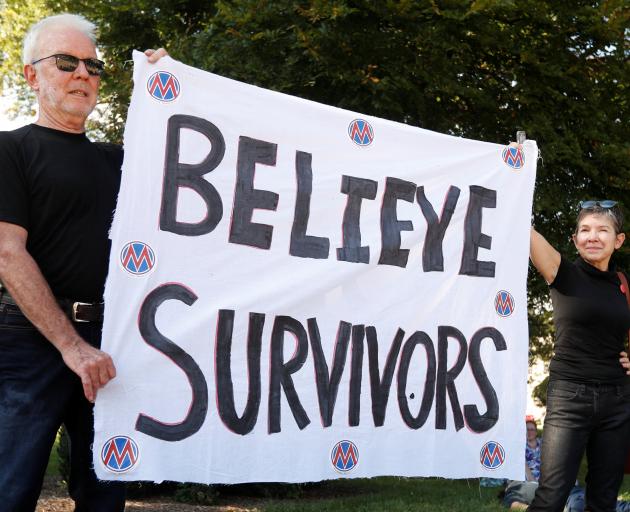 Activists hold a protest and rally in support of Christine Blasey Ford, the university professor who accused Kavanaugh of sexual assault in 1982. Photo: Reuters
In the wake of the Kavanaugh-Ford debacle, there have been many ill-thought and frankly disturbing statements being thrown around about the apparent frequency of false rape allegations and the inherent unreliability and duplicity of sexual assault survivors.

The number of times I've seen memes, statuses or thought-pieces referring to how ''difficult'' a time it is for young men navigating dating after the ''Me-Too'' revelations has made me sick to my stomach.

On Tuesday, Donald Trump expressed support for Mr Kavanaugh and mocked a woman who says she was assaulted by his favourite Supreme Court nominee. Donald Trump jun. also said he is more worried about his sons than his daughters. Of course, I'm not going to deny that false accusations occur. But there is considerable debate regarding the frequency of these false claims, with figures ranging from 2% to 8%.

In studying these figures, one must consider why there is this range of estimates. In the first instance, many analyses conflate ''unfounded'' with ''false''. ''Unfounded'' is a term used to describe claims which have been proven to be false or ones unable to be proved or prosecuted.

If the survivor has not sustained any injuries, or if the perpetrator and survivor had a previous sexual relationship, the case may be dismissed. Furthermore, retractions do not necessarily mean that the claim was untrue. A survivor may withdraw his or her allegations for a number of reasons, the hideously exhausting reporting and court proceedings being one such factor.

Essentially, false allegations of rape are few and far between, consisting of a small percentage of rape claims, and a minuscule percentage of all rapes.

But consider this: In Aotearoa, one in five women will experience sexual assault as an adult. For Maori girls and women the likelihood of sexual violence is nearly twice as high as the general population. Rates for sexual violence offences against males vary, but large scale international prevalence studies have tended to find a figure of one in seven boys. Need I spell it out for you? A boy or man is far more likely to experience sexual assault, or to perpetrate it, than to be the target of a false accusation.

I do not want to tell you what happened to me. I do not owe it to you. But I will tell you this. In the aftermath, I approached a policeman and tried to get help. He briskly dismissed my concerns and left me shivering on the footpath at five in the morning.

The cool blue dawn and the promise of solitude offered more comfort than the strong arm of the law. I couldn't bring myself to tell anyone about what had happened. I carried this burden with me for a long time. I still have not laid any charges against my attacker. I know there is no point.

Last year, VICE reported that only 9% of sexual violence cases in New Zealand are ever reported to the police. Of this amount, just over half of the cases will have the perpetrator identified, and fewer than one-third of the cases will progress to prosecution.

Then, less than half of those -13% of overall recorded cases - will result in a conviction.

These numbers are sickening, yet hardly surprising when cretins like Trump and Kavanaugh wield power. Notice the hysteria and outrage circulating the very possibility of false allegations of rape compared to the surprisingly calm discussion of false accusations of other crimes.

There is no reason for men to have an irrational fear of being falsely accused of rape.

Perhaps we need to consider whether this fear, this discomfort, this paranoia actually results from the knowledge that the behaviour towards women - present or past - is objectively wrong.

There are a thousand more things I could say about this matter.

I could tell you just how traumatic it is to have to explain what happened, to defend oneself against those who cry I'm being melodramatic, or attention-seeking.

I could explain to you why so few survivors even bother going to the police, or why it often takes them considerable time to step forward.

But frankly, I'm exhausted. No-one should have to experience first-hand what Dr Ford and countless other survivors had. These brave people deserve our support, our faith and the promise that we will continue to rally against perpetrators and the system that supports them.

The truth is this: boys and men are far more likely to be the victims of assault themselves, rather than the target of false rape accusations. Don't minimise victims' experiences.