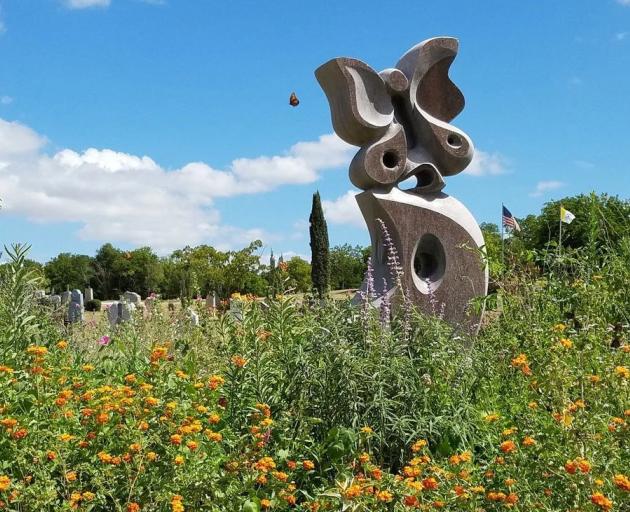 The Our Lady of the Rosary Cemetery in Texas has embraced green burials. PHOTO: SUPPLIED
I love cemeteries. I don’t mean this in a creepy, early-2000s-emo kind of way; I don’t drape myself in diaphanous dresses and wander pensively around, musing on Poe’s dark verses.

Neither do I have a Mary Shelley-esque affinity to tombstones. Rather, I am drawn to cemeteries for the sense of peace and solitude I find there. I read the grave markers and wonder about the lives of those buried six feet under. I like to think that the sleeping dead are happy that someone — even if just a stranger — is thinking of them, all these years later.

There is one cemetery I long to visit — Our Lady of the Rosary Cemetery in Texas, founded by two dear friends of mine, Nick and Ellen Brumder. Located just north of Austin, the cemetery serves all faiths and offers a variety of burial rites, including traditional burials, cremation burials, and most importantly, green burials. Our Lady encompasses 8ha of wildflower-dotted land overlooking the San Gabriel River Valley. By all accounts it is a special place of peace, beauty and unity.

But what I’m most interested in regarding Our Lady is the question of green burials. Lauded as a ‘‘natural return to the earth’’, green burials are becoming increasingly popular eco-friendly funeral options. Green burials usually take place in natural burial grounds or designated woodland burial sites in certain cemeteries. Primarily, green burials eschew embalming and use biodegradable coffins or caskets, usually crafted from recycled paper, wicker, or willow.

New Zealand’s Natural Burials organisation moreover recommends that the person should be buried only 50cm-1m deep; the ideal depth for a body to decompose in soil. Instead of embalming, director Mark Blackham advocates for refrigeration or treatment of the body with oils. A tree, rather than a headstone or plaque, may be planted above where the body is buried in a natural casket or shroud.

Green burials are nothing new; the practice matches traditions found in many ancient and indigenous cultures. Traditional Maori tangihanga (funeral rites) comprised a form of natural burial, with no chemicals or embalming fluids applied to the body, only red ochre and oil. The body was usually buried, rather than being cremated, to enable a person’s return to Papatuanuku (Earth Mother). Indeed, according to late anthropologist Cyril Schafer, embalming was rarely used until the 1950s.

Deena Costa, writing for Stuff, interviewed a Parihaka family, Maata Wharehoka and her son Te Akau, who are determined to revive traditional methods of preparing tupapaku (loved ones who have passed). The process is called kahu whakatere and, instead of a coffin, uses a waka or transporter composed of natural wood. A kopaki (mat) made from harakeke (flax) is wrapped around the body, and no chemicals or embalming fluids are used.

Over time, embalming fluids leach through the casket into the soil. The constituent components of formaldehyde kill decomposer microbes necessary for the breakdown of a body in the soil. Research has also indicated that long-term exposure to formaldehyde, a workplace hazard for mortuary workers, has carcinogenic effects. Coffins, meanwhile, are usually not biodegradable, and many of the glues used in chipboard and the like contain formaldehyde.

Cremation is another popular option, but while it is economically viable, it is not environmentally so. For starters, cremation requires a lot of fuel. Especially when coupled with prior embalming, the CO2 emissions from cremation are surprisingly large — think millions of tonnes per year. Byproducts also include carbon monoxide, dioxins, and mercury vapour; all environmentally damaging.

Green burials are not only environmentally friendly, but are also respectful towards the planet. While still providing a place for loved ones to visit and honour their dead, green burials conserve the beauty of the land. Human death need not engender environmental destruction or death.

Green burial is not without its detractors, however. Even with refrigeration and oils, there is only so long a body can last without decomposing. Embalming however, allows time for whanau and loved ones to travel from afar to pay their respects at the tangi. In places like New Zealand, green cemeteries are few and far between, and are therefore inaccessible to some people. Cremation, moreover, is an important funerary tradition to certain religions and cultures, such as Hinduism.

The United Kingdom encompasses more than 270 natural burial sites, and there are more than 150 in the US. There are relatively few natural cemeteries in New Zealand however, due to restrictions against burying people on private land. The first green cemetery was established in Wellington in 2008, while others have sprung up in New Plymouth, Otaki, and Marlborough. At Makara Cemetery, plots are filled with organically active soil, and native trees are planted upon the burial sites. Soon the whole cemetery will be restored to native bush, enriched by bodies’ nutrients and matter. It is truly a living memorial to those buried there.

Death is something inevitable, to quote the venerable Nelson Mandela. We cannot choose to elude death, but we can choose how to approach our eternal sleep. Much as I’d like a grand Viking funeral, or to be mummified like Lenin in the Red Square, with crowds of doting fans filing past my desiccated body, when the time comes, I would like a green burial; something simple, quiet, and respectful to the planet.

I want to be remembered by the love I gave and received, my art, my writing, and probably, my unwise and foolish decisions. Give me some good old Franciscan simplicity; I don’t need what youth or beauty that might remain in my earthly frame artificially prolonged by chemical preservatives or embalming fluids. We are made of stardust, so they say. Well, one day I hope to quietly return to the earth — perhaps at Our Lady of the Rosary Cemetery — to become part of the wildflowers, even if they do contain thistles and stinging nettles.