Increasing inclination to question 'the system' 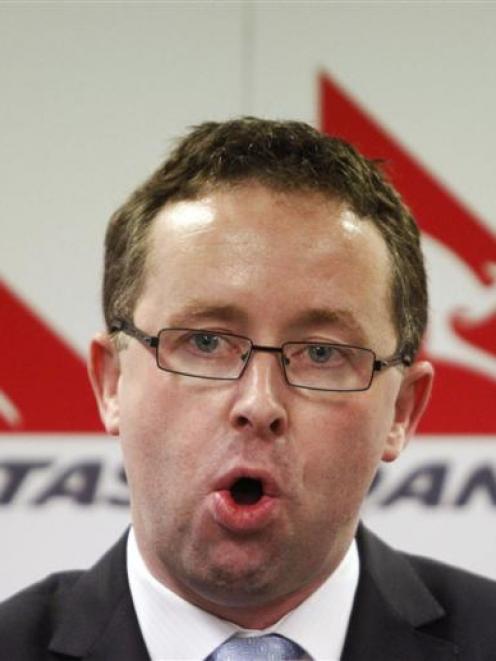 Qantas chief executive Alan Joyce, who locked out company staff. Photo by Reuters.
Alan Joyce, the chief executive of Qantas, in the news over a shock lockout of airline employees and grounding of the fleet thought to have cost the airline millions of dollars, has trimmed the Aussie carrier of more than 1000 workers this year. His ostensible reason?

The airline is uncompetitive and losing money - $200 million a year in its international operations, he says.

In fact, across the entirety of its activities, Qantas is one of the more competitive airlines in the world and last year earned profits of $552 million. So from its perspective, the board of directors could justify rewarding Mr Joyce, even as industrial relations in the company reached a new low.

As the chief executive played hardball over staff conditions and remuneration, they awarded him a 71% salary increase - to $A5 million.

The ordinary folk whose daily grind keeps the airline in the air - from pilots to cabin crew and ground staff - were not amused. Who can blame them?

The boss destroys the livelihood of hundreds of workers and tries to materially downgrade that of thousands of others and is rewarded extravagantly by "the system" for so doing.

No wonder people are increasingly inclined to question "the system".

Take the worldwide "Occupy Wall Street" movement. At least part of their beef is the increasing gulf between the small band of hyper-rich individuals who own a vastly disproportionate degree of the world's wealth, and the huge majority of citizens on whose backs - and with whose co-operation - "the system" operates.

Among other things, they are concerned about economic disparities and the growth of inequality in society. Their generally peaceable protest serves notice that when the disparity between those at the top of the pile and those at the bottom becomes huge, and there is no common ground between the two, there is also little basis for social and political consensus.

And when there is no consensus "the system" is in danger of being irreparably damaged - or even broken. The people as a whole must have confidence in government - in the broadest sense of the word.

Our government is based on the principles of capitalism. There are those who argue that some of those principles have got out of whack. In a world of constrained resources - food, water, arable land, minerals, fossil fuels - a world that has just this week seen the official population hit the 7 billion mark, a world in which competition for the very basics of life will become ever more urgent, it is critical that the guiding philosophical foundations of our society are respected by the great majority.

That necessarily includes concepts such as fairness and equality of opportunity - for employment, for justice, for dignity and for peace.

Last week in this city Finance Minister Bill English expressed empathy with some of the ideals of the Occupy Wall Street movement.

Naturally enough, though, he had no truck with the objective of an end to capitalism itself. What would replace capitalism if it ended?

Those who have been around long enough, or who have studied their history books sufficiently closely, will have a fairly dim view of the prospective alternatives: fully blown communism, for example, spectacularly blotted its copybook in numerous instances throughout the 20th century.

But is fully-blown capitalism in danger of doing likewise?

In 2007-2008 the world economic system was brought to its knees in large part by a variant mutation of the world banking system in which "sophisticated" financial instruments were devised to create obscene profits for a tiny elite.

The bankers and brokers responsible continued to receive huge bonuses even as governments - using the taxes of everyday citizens - bailed them out.

At the same time the taxation systems of many countries continued to advantage these elites and their powerful friends in business or government. Investment luminaries such as Warren Buffet have railed against the inequities of such a system, and called for a rebalancing of such excesses.

So have economists. Here is Nobel Laureate Joseph Stiglitz concluding an essay on the subject of inequality in the May issue of Vanity Fair.

"The top 1% have the best houses, the best educations, the best doctors, and the best lifestyles, but there is one thing that money doesn't seem to have bought: an understanding that their fate is bound up with how the other 99% live. Throughout history, this is something that the top 1% eventually do learn. Too late."

We are some distance away from that here, but the trend is going all too rapidly in the wrong direction. It needs to be addressed.