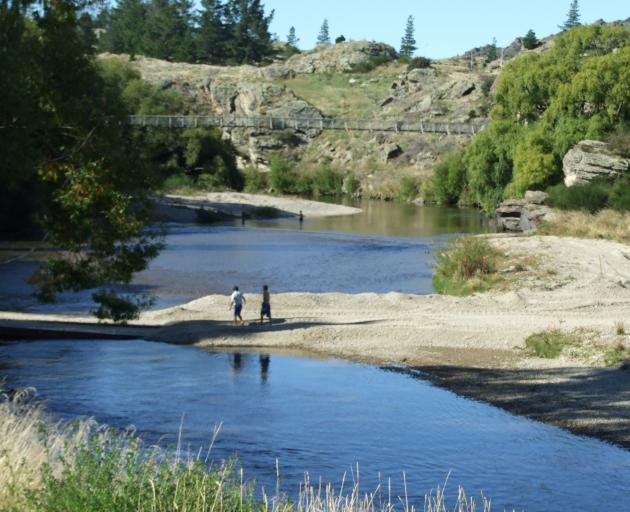 Swimmers would welcome an increased flow of the Manuherikia River in summer. Photo: ODT files
The Manuherikia is a river in crisis. Otago Fish and Game Council environmental officer Nigel Paragreen says there is not enough water in  the river to achieve we demand of it. So what’s the answer?
The Otago Regional Council (ORC) is consulting on minimum flow scenarios for the Manuherikia.

Naturally, the consultation has triggered a range of opinions. Most recently, ORC councillor Gary Kelliher urged us to focus on “science, facts and sensible outcomes”’ above all else. I’m happy to accept that invitation.

When I look at the Manuherikia, I see a river in crisis. Each summer the water taken for irrigation causes conditions in the lower river and tributaries that are akin to extreme drought. This creates an ecological bottleneck. Fish populations drop, algae blooms proliferate and the aquatic insects which fuel the ecosystem start to diminish. People suffer too, as food from the river becomes more difficult to catch and conditions for recreation deteriorate. Taking your dog to the river might risk its life because of toxic algae, which is ever more frequent.

Hydrological modelling shows us the scale of drought we impose on the river. The summer low flows we have observed in the lower river in the past 10 years or so are on average just 25% of what would be there without dams or water takes.

It has been this way for pretty much the past 100 years — a century of summer droughts imposed on the river.

In the modern era, we are now required to prioritise the river via the fundamental concept of ‘‘te mana o te wai’’ (the life force of water). That’s a fact, set in policy and inescapable. The concept gives as a first priority the health and wellbeing of the river, then allows for other factors. Interpreting ‘‘te mana o te wai’’ in the context of the Manuherikia must be at the centre of our discussions. We now have a great deal of information to do just that.

Environmentally, it appears that the information on hand points us to favour the higher-flow scenarios. Higher-flow scenarios generally provide better habitat or living conditions for aquatic species, including aquatic insects which are a base of the food web and perhaps the most important measure of in-stream health.

The public benefits significantly from higher-flow scenarios too. When asked, swimmers overwhelmingly said they wanted flows much higher than they now encounter in summer.

Irrigation doesn’t do as well from the higher-flow scenarios, judging from the economic studies. Depending on which study you use, job losses in the Central Otago region range from one to 51 at the highest-flow scenario. However, neither of those studies consider potential jobs created by a restored river in different industries, or adapting farming and business practices.

The ORC information also suggests that a concept promoted by Cr Kelliher, and popular among the agricultural community, probably isn’t based on fact. Flows in the lower river are not likely to collapse if a minimum flow is triggered and Falls Dam runs out of water. Hydrological modelling shows that without dams or water takes, the catchment above Falls Dam contributes only a minority of the total flows in the lower river. The remainder comes from the tributaries downstream. As I understand it, proportional contributions to river flows from the upper catchment and each of the tributaries would ensure that if the dam did run dry, flows in the lower river wouldn’t collapse.

Overall, it’s clear to me that there isn’t enough water in the river to achieve everything we demand of it. To prioritise the environment, irrigation will suffer and vice versa. With priority given to the river, it’s likely that sensible outcomes will have a basis in environmental, not economic, limits.

Importantly, the ORC’s consultation is canvassing feedback on where we should aim but not how we should get there. How we achieve a given flow regime will need to be addressed by the time the land and water regional plan is notified in 2023.

At the ORC’s Manuherikia Reference Group, I’ve stated a preference for using time to reduce the burden of transitioning farming practices to facilitate a new flow regime; although I remain open to alternatives. A change in farming practice is not unusual. It happens in response to any range of factors, such as changes in commodity prices, costs of finance or higher fuel prices. Less access to water, a free and public resource, is as good a reason as any. History tells us smart people and good businesses always adapt.

I’m sure the sensible outcomes I suggest will be different from those of Cr Kelliher. For my part, that’s a matter of interpretation rather than wilful ignorance or preconceived notions, as he had suggested. The science and facts as I understand them currently point to the river needing a far greater share of the water.

• Nigel Paragreen is environmental officer at the Otago Fish and Game Council. He is a member of the Manuherikia Reference Group and has been heavily involved in the deemed-permit transition process.

Over half of New Zealand freshwater invertebrate species are classified as at risk or threatened, 48 critically so according to a 2018 assessment. While a statistical summary of the status of New Zealand freshwater fish species assessed in 2017 classified only 12 as not threatened! With 1 having gone extinct!
If we do not protect and repair the natural world the consequences for humankind will be dire, it will effect the health and well-being of us all. As individuals we are not going to stop the destruction of the Amazon rainforest but we can help to save wildlife here in our backyard by making our voices heard and telling the ORC that anything short of a complete restoration of this and all other Otago waterways is totally unacceptable. The well being of the waterway must come first. It is not only a good future investment but it also the law.

And I'd support the opinion of an environmental officer any day over those of any farmer who relies on the river for his livelihood.

Fish & Game (and their predecessor) are responsible for more environmental damage than any farmer. They introduced trout consuming taonga galaxiids to extinction in every river trout can access, ferrets, rabbits, weasels and stoats. Their ducks and geese are also responsible for approximately 80% of E.coli in rivers. Of course, F&G will say about the historic environmental crimes "we didnt know better", but neither did farmers who were paid to drain wetlands yet are vilified for it. F&G have done more damage to this country in the last 50 years than any other party. F&G will be the next public enemy #1 once farmers are destroyed.