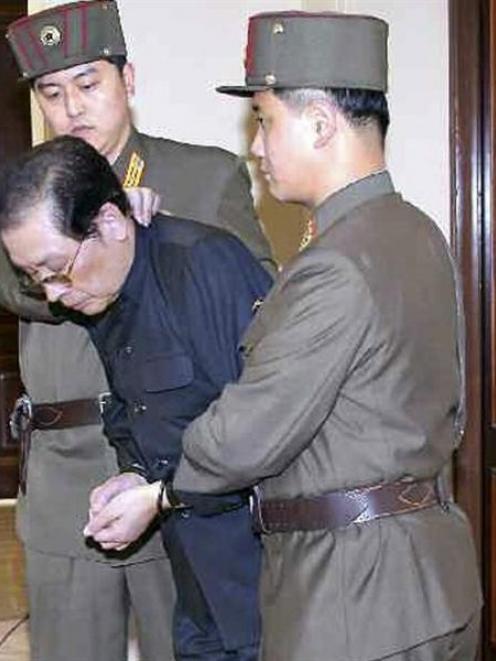 Jang Song-thaek, with his hands bound, is dragged into the court by uniformed personnel last week. North Korea said last Friday Jang, the uncle of leader Kim Jong Un, previously considered the second-most powerful man in the secretive state, had been executed for treason. Photo by Reuters.
Purges in communist states have rarely stopped with the execution of one senior party member, especially when he has been tortured into ''confessing'' at his show trial that he was planning to stage a coup using ''high-ranking military officers'' and other close allies.

''I didn't fix the definite time for the coup,'' Jang Song-thaek, the former number two in the hierarchy of the world's last totalitarian state, said at his trial.

''But it was my intention to concentrate [my allies in] my department and in all the economic organs in the cabinet and become premier when the economy goes totally bankrupt and the State is on the verge of collapse.''

It's most unlikely that Jang was really planning a coup, but all of his suspected allies and associates in his own department and other parts of the Government, plus any senior military officers suspected of less than total loyalty to Supreme Leader Kim Jong-un, are in grave danger.

Only two of Jang's aides have been killed so far, but hundreds or thousands of other people thought to be linked to him may suffer the same fate.

This is unquestionably the biggest internal crisis in North Korea since the early years of Kim Il-sung, the founder of the regime and grandfather of the current dictator.

Challengers to the Kim family's monopoly of power have often been killed, but this is the first public show trial in North Korea since 1958.

It's also the first time that the regime has publicly admitted that there are rival factions in the senior ranks of the Workers' (Communist) Party.

It's hard to believe that this will not be followed by a wider bloodbath among the leading cadres along the lines of Stalin's purges in the former Soviet Union and Mao Zedong's in China.

It's harder to understand what is driving the current upheaval, but some plausible guesses are possible.

When Kim Jong-il, the father of the current ruler, was dying, he chose Jang as the man who would ensure a smooth transfer of power to his son.

Jang was married to the elder Kim's sister, and was therefore presumably loyal to the family.

Jang acted as chief adviser to Kim Jong-un, who was only 28 and quite inexperienced when he inherited the leadership in 2011, and his manner sometimes seemed quite overbearing.

At the same time, Jang was the principal advocate within the regime for an economic opening on the Chinese model to rescue North Korea from its crushing poverty.

To achieve that goal, he first had to wrest control of the country's leading industries from the military, whose enterprises account for a third of the entire economy.

This, naturally, made him an enemy in the eyes of the military establishment.

So we can speculate that Kim Jong-un, as he gained confidence in his own abilities, grew increasingly hostile to the dominating influence of Jang, who was more than twice his age.

He would need allies before he moved against Jang, and many military officers were glad to oblige.

On this reading of events, Kim wants to get rid not only of Jang but of the entire generation of older military and civilian leaders who secretly regard him as an upstart.

His objective would be to replace them wholesale with younger men who owe their positions directly to him.

Or maybe something else is at the root of all this turmoil: we simply don't know.

What we do know is that there is great turmoil in North Korea, a nuclear-armed country with the fifth-biggest army in the world.

Most people assume that at some point in the future the regime will collapse, and some well-informed people worry that the collapse could come quite suddenly and quite soon.

Interestingly, almost nobody wants that to happen.

Most North Koreans don't want it to happen, despite the dreadful conditions they live in, because a lifetime of propaganda has convinced them that South Koreans (and everybody else) lives in even worse conditions than the citizens of the Workers' Paradise.

Most South Koreans don't want it to happen because they would then have the duty of rescuing 24 million North Koreans from dire poverty.

In theory they want unification, but there are only 50 million South Koreans to bear the burden, and it would take a generation of sacrifice to accomplish that task.

Neither North Korea's Chinese neighbours nor South Korea's American allies want it to happen, because the collapse of the Pyongyang regime could bring them into direct conflict.

As a recent study by the Rand Corporation pointed out, it would cause a race between Chinese troops and South Korean and American troops to take control of North Korea's territory.

The Chinese would be determined to keep American troops away from their own border with North Korea.

The South Koreans and their American allies would feel compelled to go to the aid of a North Korean population that was probably facing starvation by then.

And both sides would be racing to gain control of North Korea's nuclear weapons before something terrible happened.

In such circumstances, a collision between Chinese and South Korean/American forces is all too easy to imagine.

Kim Jong-un is a very nasty piece of work, but a lot of people are praying for his survival.