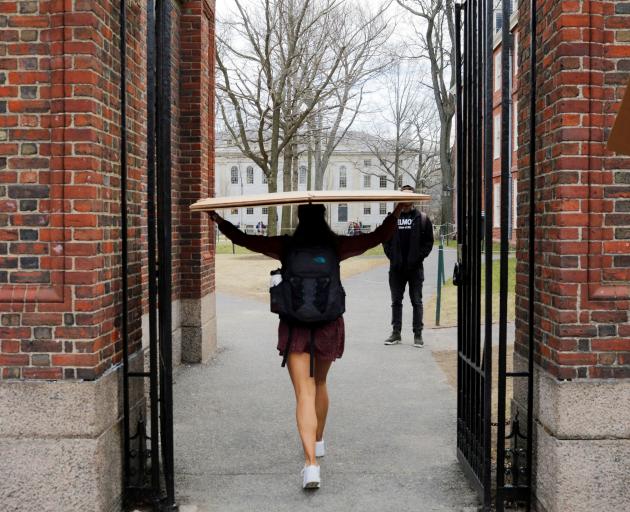 A student carries a box to her dormitory at Harvard University, after the university asked its students not to return to campus after the spring break and said it would move to virtual instruction for graduate and undergraduate classes. PHOTO: REUTERS
Former University of Otago graduate  Martin Enright tries to make sense of the Covid-19 pandemic as his dreams of studying at Harvard University collapse.

I’m a New Zealand student at Harvard. I’m studying at the Kennedy School, one of 58 nationalities in my programme. I thought it could be an exciting time to study in the US.

In the space of less than a week, I have witnessed this institution hollowed out, closed down and moved online.

Every conversation in the local streets seems to have been hijacked by a single topic, as students struggle to understand what has happened in their lives and what will happen next.

The neighbourhood seems more like I imagine New Orleans must have been in August 2005, under gathering storm clouds, awaiting an invisible hurricane that only separation, social care and extreme hygiene may prevent.

Tuesday morning’s lecture began as usual, crisp and sharp at 8.30am.

Sharpened for writing and sharper for argument. Then the emails began arriving. Soon the lecturer was stopped and told by students that Harvard had announced its students would not return after spring break. All classes would now be conducted remotely. The usually exuberant and keen mood collapsed.

Before the end of class it became clear that I was attending my last lecture in person and probably my last university event. Those sharpened pens may now be needed for rewriting dreams.

The news was harder for undergraduates. Their residential colleges are being closed and more than 6000 undergraduates were required to vacate their rooms by Sunday. No consolation that this message was repeated in many other universities and learning places across the country.

As the week progressed, concerned and tired parents in jam-packed cars on jam-packed side streets, who have often sacrificed so much for their children’s education, began taking them home. Students were hugged and held.

The spirited ones downed cups in the street, cranked up the party music and challenged each other to jump off the Anderson Memorial Bridge into the still frigid waters of the sluggish Charles River.

Harvard is a small and extremely privileged corner of this vast and diverse country. But even its wealth and exclusivity has not left it immune to both the hype and hurt being caused by the coronavirus. No-one will be untouched.

An important learning from so many lessons here.

The majority of students are from the families of the top 10%. They are insulated and the communities to which they return are resourced to absorb and support them. Among those hardest hit are international students without permanent residence here, left in a limbo that results from being both shut out and shut in.

Those who can return home face unknown fears of whether they could be let back in again to complete their studies. Students with no backup plans are reaching out to avoid being left without shelter. I have seen kindness and concern that should melt hearts. Compassion that made me proud to remain.

Within hours a fluffy white therapy dog, resplendent with pink ribbon, turned up at Harvard Business School to help with the emotional overspill. More were needed.

A seminar I attended at lunch was restricted and attendees were seated six feet apart. Surgical gloves and sanitiser appeared at the gym. The new normal arrived very fast.

This followed an announcement that functions of more than 25 people will be cancelled until end of April.

A great attraction of this place is its extraordinary convening power. The opportunities to gather in crowds to listen to some of the world’s best-known leaders and analysts share their stories and insight have provided some of my most memorable experiences.

These voices are silenced for now.

Just last Sunday — an age ago in a world where everything seems both gradual and all at once — the dean of our school, Professor Douglas Elmendorf, sent an email detailing precautionary measures. It was a thoughtful email expressing his worries about the difficulty of deciding each day how to change personal routines, how to deal with many disappointments and how to manage concerns about the health of loved ones. He reminded us of the importance of considering others and the ‘‘social risk’’ we create if our own precautions aren’t adequate.

While studying here I’ve been encouraged to look hard at how well America is meeting its promise.

The answer may lie ahead as social and economic realities set in.

At this time, in an unfolding emergency of unknown scale, it seems clear that part of the promise lies in taking greater responsibility for each other.

We are together only as strong as our support of the weakest in our community.

This is the real lesson that Harvard is teaching me now. It is also the one I want to share back home.

- Martin Enright is a master of public administration student at the Harvard Kennedy School of Government and the recipient of a New Zealand Churchill Fellowship. His family is from Central Otago and he is a third-generation graduate of the University of Otago. The views expressed in this article are his alone.