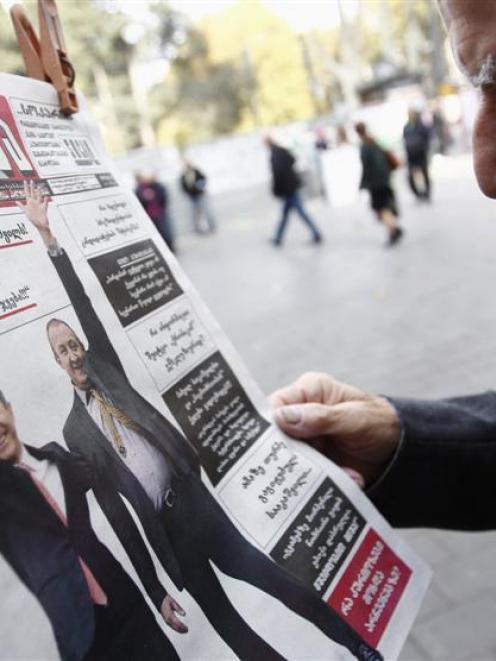 A man studies a newspaper displayed on a stand, in Tbilisi, with images of Georgian Prime Minister Bidzina Ivanishvili (left) and presidential candidate Georgy Margvelashvili (Georgian Dream coalition). Mr Margvelashvili, won a landslide victory in Georgia's presidential election, cementing the ruling coalition's grip on power after president Mikheil Saakashvili's 10-year rule. Photo by Reuters.
''My work here is done,'' said the masked man, as he mounted his horse and rode away.

But he didn't go very far away.

Prime Minister Bidzina Ivanishvili, of Georgia, doesn't actually wear a mask, but he is mysterious enough without one.

It's never been quite clear how he got so rich - his fortune is estimated at $US6.4 billion ($NZ7.75 billion), about a third of the entire country's annual GDP - but the real puzzle is his motives and goals. Why did he bother to become prime minister at all if he was planning to quit after only one year?

He returned home only 10 years ago, after 20 years in Moscow. He built a huge and spectacular mansion in the hills above Tbilisi, the capital, and began doing good by stealth. The small Transcaucasian republic was near economic collapse at the time, and he quietly subsidised beloved Georgian artists and actors who could not make ends meet.

At one point, Mr Ivanishvili even paid the salaries of state employees when the Government could not, and it has recently emerged that he paid for the massive new cathedral that now adorns the city centre. He clearly disliked the country's president, Mikheil Saakashvili, but he shunned politics and mostly stayed out of sight on his secluded estate like a James Bond villain, stroking his tame zebras in lieu of the statutory evil cat.

Then, 18 months ago, he formed a political party that quickly combined with others to form the Georgian Dream coalition. Last October, it won a sweeping victory in the parliamentary elections and Mr Ivanishvili became prime minister.

Last week, his candidate, Giorgy Margvelashvili, replaced Mr Saakashvili as president and his triumph was complete.

So now he is going to quit.

Two months ago, Mr Ivanishvili announced that he would retire as prime minister as soon as Mr Margvelashvili was installed in the presidency. Some other member of the Georgian Dream coalition will take over as prime minister, while Mr Ivanishvili devotes himself to ''strengthening civil society in Georgia as a private citizen''. Georgians must not think of him as a messiah, he says.

There have certainly been too many messiahs in Georgia's recent history. After the old Soviet Union broke up in 1991, the first president of independent Georgia was Zviad Gamsakhurdia, a former dissident and ethnic nationalist who led the country into a civil war.

Georgia lost control of the ethnic minority regions of South Ossetia and Abkhazia under his rule, and he ended up shooting himself when surrounded by hostile militia troops.

Next came Eduard Shevardnadze, an old Communist apparatchik (he spent six years as the Soviet Union's foreign minister) who had once gained fame as an anti-corruption crusader.

However, back home, he presided over one of the most corrupt regimes in the world. His inner circle wound up controlling about 70% of the country's economy, while most ordinary Georgians continued to live in wretched poverty.

The last messiah was Mikheil Saakashvili, who launched the non-violent ''Rose Revolution'' and restored democracy to Georgia in 2003. But Mr Saakashvili also started and lost a war against Russia over breakaway South Ossetia in 2008.

The Georgian economy more than doubled in size during his decade in power, but at least a quarter of the population lives in extreme poverty and unemployment remains above 15%. When people protested about his policies, they were met with violence and repression - so when Mr Ivanishvili gave them a plausible alternative, they flocked to his banner.

Mr Ivanishvili has never offered a coherent plan for Georgia or even very distinctive policies; Georgians appear to have chosen him as the next messiah simply because he has a lot of money and seems to be generous with it. And it doesn't bother them where it comes from.

Mr Ivanishvili made his fortune in the chaotic decade after the collapse of the Soviet Union, and like all the other ''oligarchs'' who emerged in Russia at that time the exact route he took on his rise to great wealth remains obscure.

All of them did it by privatising former state companies or property into their own pockets at derisory prices, but just how they managed that is rarely explained, and would usually not bear close inspection. Never mind all that.

Mr Ivanishvili is the only Georgian billionaire, and his wealth and wisdom will save us all. In last week's election, his presidential candidate got 62% of the vote, compared with only 22% for the candidate chosen by the last messiah. (Mr Saakashvili could not run for president again himself, having served two full terms.)

Mr Ivanishvili's decision to retire from high political office himself is less quixotic than it seems. He's not actually relinquishing power: with loyal placemen in both the presidency and the prime minister's office - president-elect Giorgy Margvelashvili said that he would always listen to his ''authoritative friend'' - he can continue to dominate affairs without having to take any personal responsibility if things go wrong.

Money doesn't talk; it gives commands. And it doesn't really do democracy, either: Mr Ivanishvili's Government has already begun arresting Mr Saakashvili's former ministers on various charges, and the ex-messiah himself can probably expect the same treatment once he leaves the presidency.

Salvation for Georgia is still not at hand.