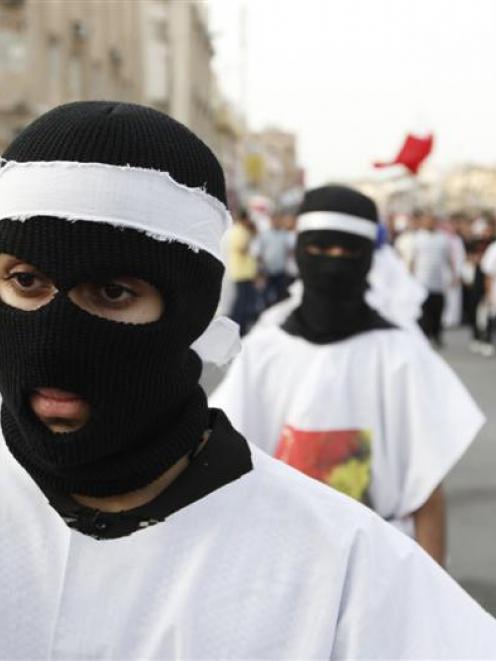 Protesters wearing burial shrouds take part in a procession during a visit to the grave of a 16-year-old youth killed by Bahraini security forces in clashes on February 14, in a Bahraini village. The protesters wear the shrouds to demonstrate they are willing to die for their cause. Photo by Reuters.
''Floggings will continue until morale improves.''

As a way of dealing with a discontented crew it was much favoured by 18th-century sea-captains, but the Bahrain Government has been an apt pupil. Alas, Interior Minister Sheikh Rashid bin Abdullah al-Khalifa doesn't quite grasp that this sort of policy statement must be clear and concise.

Announcing that the Bahraini authorities would intensify the repression that has prevailed since the crushing of pro-democracy demonstrations two years ago, the sheikh declared last October: ''It has been decided to stop all gatherings and marches and not to allow any activity before being reassured about security and achieving the required stability in order to preserve national unity.''

He's got the spirit of the thing right, but he falls short in the clarity and brevity departments. (He's obviously been listening to spin doctors, and they always hate clarity.) At any rate, the demonstrations, gatherings and marches have not stopped, although they have got even more dangerous for the participants.

Bahrain's brief role in the ''Arab Spring'' began on February 14, 2011, when demonstrators demanding a constitutional monarchy, a freely elected government and equality for all citizens took over Pearl Square in Manama, the capital of the tiny Gulf state. But one month later the protesters were driven from the square by force, and after that the repression became general.

By no coincidence, that was also when Saudi Arabian troops arrived ''to help the Government of Bahrain restore order''. (Bahrain is an island connected to Saudi Arabia's Eastern province by a long causeway.) Officially, the Saudi soldiers were invited in by Bahrain's ruler, King Hamad bin Isa al-Khalifa. Unofficially, he probably had no choice in the matter.

Bahrain's ruling family is Sunni Muslim, like Saudi Arabia's and those of all the other members of the Gulf Co-operation Council (Kuwait, Qatar, United Arab Emirates and Oman). However, 70% of Bahrain's population is Shia, whereas the rest of the GCC countries are overwhelmingly Sunni. And the relationship between Sunnis and Shias throughout the region is coming to resemble that between Catholics and Protestants in 16th-century Europe.

The ensuing century of religious wars in Europe was not really about doctrinal differences. The wars were driven by the rulers' conviction that people who did not share their particular brand of Christianity could not be loyal to them politically.

It was nonsense, but millions of Europeans were killed in the 1500s and 1600s in wars triggered by this belief. The same disease now seems to be taking root in the Arab Gulf states. Shias, it is argued, cannot be loyal to a Sunni ruling family. And if they object to being oppressed, it can only be because Shia-majority Iran has deliberately stirred them up.

There is a real political and military rivalry between Iran, the major power on the north side of the Gulf, and the smaller Arab states to the southwest. It has got even worse since the US invasion of Iraq ended centuries of Sunni rule and put a Shia regime in power there. The competition is actually geopolitical and strategic, not sectarian, but people get confused.

So Saudi Arabia worries a lot about the loyalty of the large Shia population (maybe even a majority) in its Eastern province, where all the oil is. It was certainly not going to tolerate a democracy - which it thinks would be a ''Shia'' democracy, and therefore a hostile regime - in Bahrain, right next door.

And, of course, it believed that the downtrodden Shia majority in Bahrain (who cannot even serve in their own country's army and police) had been stirred up by Shia-majority Iran across the Gulf. So when Bahrain's king had still not got the pro-democracy protesters under control after an entire month, Saudi Arabia sent its troops in.

This may not be what the king had in mind. It certainly wasn't what Crown Prince Sheikh Salman bin Hamad al-Khalifa intended: he was trying to negotiate with opposition parties about giving Shias a bigger role in the kingdom's affairs. But Saudi Arabia didn't want that kind of example right next door, and it found hardline allies in the Bahraini royal family.

It may have played out somewhat like the Soviet invasion of Czechoslovakia in 1968, when Moscow, determined to crush the reform movement there, got some second-rank Czech Communists to request military intervention. At any rate, hardliners in the royal family have called the tune since then, while the king and the crown prince have effectively been sidelined.

The brothers belong to the Khawalid branch of the royal family, descended from another royal who led a brutal crackdown against a Shia uprising in the 1920s. With them in charge, there will be no compromise, even though more than 80 Shia protesters have already been killed.

And even if it gets a great deal worse in Bahrain, no Western government is going to condemn the country's rulers. That would seriously annoy Saudi Arabia, and they will never do that.