Let us, too, become the city of the verb, not expletive 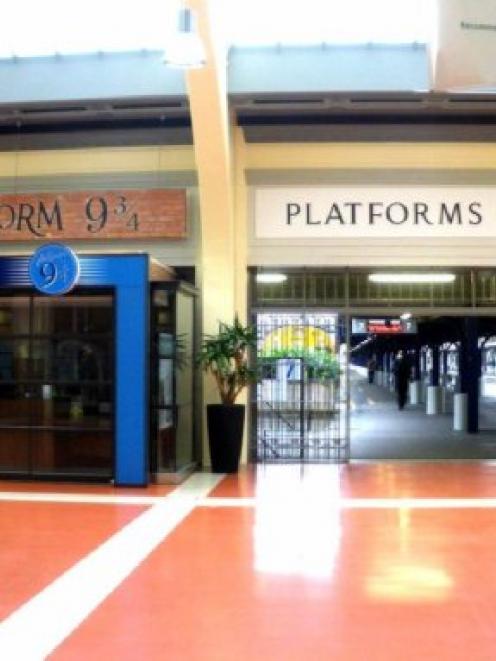 Last month my daughter was lost to Dunedin.

I was with her in Wellington, the new object of her affections, when she was seduced and I, a passionate Dunedinite, was seized by the same unexpected delight in the city I hadn't visited for three decades.

To be fair, when we went to check out Victoria University Katie had already decided that's where she wanted to be.

Otago's campus is handsomer and its academic credentials better, but like most of her age, she simply wanted to spread her wings.

But oh ... Wellington. If only Dunedin's leaders had half the imagination of their Wellington counterparts, if only there was less vomit on our streets, we might have kept her.

There was magic at every turn.

The exuberant plasterwork and exquisite tile floor of the 1908 Bank of New Zealand had been retained in a mall of small boutiques.

There was magic, too, at the Railway Station, where Platform 9 announced itself above a dry-cleaner's stall.

Wellington is the "world headquarters of the verb", as the Writers' Walk plaque of Lauris Edmond's poem informed us.

The evidence of optimistic activity was all around us.

At the city plaza we ran from one sculpture to the next, all different but the final result a unified whole of delight.

"Even their boat sheds better than ours," said my rowing daughter glumly as we watched some girls lift their boat out of the water.

Near Te Papa, where an extensive area of native landscaping was linked with bridges and walkways, two young Indian guys were hooning around on a sort of tandem tricycle.

Along Customhouse Quay were new plantings of pohutukawa, and in one of these was a tui.

The Victorian slum houses of Newtown and Tinakori were largely free of aluminium window blight.

In the central city a century-old two-storey building leapt skywards in a series of playful additions.

Katie and I didn't consciously seek these delights out. We just wandered around and stumbled across them.

Back home, googling our discoveries, I was able to interpret what we had seen.

The Wellington Sculpture Trust "commissions sculpture for public spaces to enhance the urban environment and to support the creative arts in New Zealand".

The trust works closely with the Wellington City Council, which owns and maintains the sculpture after installation, but gets funding from other bodies.

The boat shed is a category 1 historic building belonging to the Star Boating Club, which built it in 1887.

Originally on the water's edge on Customhouse Quay, it was shifted twice as harbour reclamation left it high and dry, and again to its present location in 1989.

The club operates from the lower level, while upstairs a posh function centre - The Boatshed - provides an income.

The council planted more than 40 "Maori Princess" pohutukawa on new median strips in 2006-07 as part of a Greening the Quays project, providing better pedestrian access to the waterfront, as well as beautification.

Why can't we do this sort of thing in Dunedin? Of course we are hampered by having all our eggs in one basket.

To mix metaphors, the stadium egg has now hatched and it is a cuckoo.

The monstrous interloper squats fatly on the foreshore, squawking for more money.

Meanwhile, the many fledgling enterprises which might have provided delight to Dunedin's citizens and visitors will starve or will never hatch at all.

According to mayoral candidate Dave Cull, the council's debt loading is such that DCC staff have been told no new projects can be contemplated unless others are wiped off the list.

To those of us who warned of the stadium's inevitable opportunity cost, it is cold comfort now to say "I told you so."

But it's not just about money.

A new revivalist building in keeping with its surroundings costs no more than a modernist building.

Restoration need cost no more than demolition and building anew and Dunedin developments like the Clarion Building in the Exchange show what can be done.

Art does not have to be expensive to be good, and its impact depends as much on placement as on its intrinsic merits.

The Portsmouth Dr molars are designed to rot, and they are.

This would be less of a sick joke if other, more positive, works of art were nearby.

How much did Wellington station's Platform 9 cost? And positive thinking is free.

No doubt, Wellington harbour has few mornings calm enough for rowing, but the Star Boating Club has rolled with the punches for more than 140 years.

The magic of these small touches is cumulative.

When they occur close enough together, geographically or temporally, there comes a tipping point when the feeling of wellbeing creates its own positivity: "I feel part of this.

I could make a life for myself here".

It's ugly, it's essentially redundant and its intimidating bulk will hinder people-friendly development of the surrounding area.

We might gain a handful of sports fans, but we would gain many more with a Wellington-style grab-bag of treats for a wider range of people.

The Dunedin City Council need not be a prime mover in such initiatives, but it must have the imagination to recognise and support the many innovative and creative Dunedin people who could do a Wellington: not only small projects but larger ones like a High St cable car or a penal museum in the city's historic prison building.

We need councillors who can bring town and gown together.

The appalling behaviour and mess in the student area every weekend is damaging the city's reputation.

At the least, we need a mayor and councillors who don't alienate their ratepayers, destroy and remove access from the city's heritage drawcards (I'm thinking of the Lovelock Ave closure, the recent demolition of two historic High St buildings and the wrecker's ball dangling over three more in Princes St) and preclude development by bad planning and lack of foresight.

Stuck in this cycle of destruction and antagonism, Dunedin at present is the city not of the verb but of the expletive.

I love Dunedin and I want to see this change. With the arrival of my local body voting papers, I am ready.