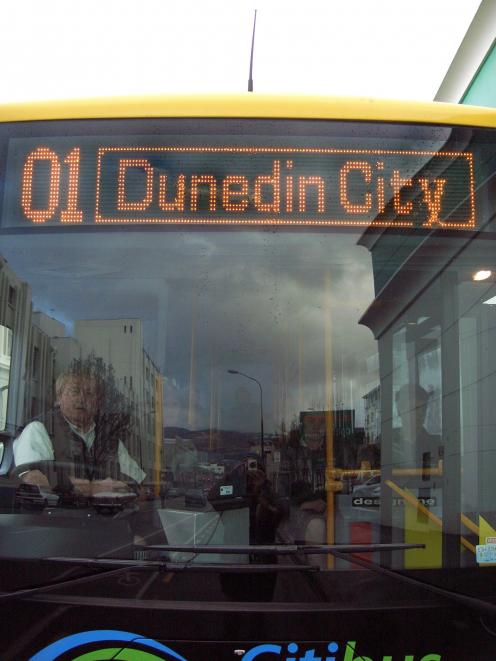 Photo by Peter Dowden.
City councillors should be passionate about Dunedin's public transport and consider taking over its management, Peter Dowden writes.

In these local body elections, I am voting for public transport.

There is no political party or council ticket with such a name, but a close read of candidates' policies reveals their interest in or enthusiasm for public transport, or their lack of it.

The reasons to advocate for public transport are straightforward and range from the global to the local: from reducing carbon emissions to maintaining accessibility of our city to all its citizens.

It is also easy to make cases against public transport: it is under-used, especially off-peak, and many find the large, smoky buses intimidating in the confined spaces of our city centre.

I believe the arguments against public transport must be resisted.

While it is true that services are under-used, an ageing population, and ever stricter medical testing for fitness to drive, make the remaining users more dependent on the service.

Occasionally, there are proposals to shift bus stops away from the city centre.

The existing remote stops, such as Cumberland St, are always more windswept and less inviting.

These ideas should also be dismissed: they are out of touch with the needs of non-drivers, and akin to placing disabled parking spaces at the furthest corner of shopping centre car parks.

The political responsibility for public transport in Dunedin is not well understood but, in a nutshell, if you travel through Dunedin by car, truck or bicycle, on horseback, skateboard or scooter, you are a client of the city council.

If you choose to travel by bus, you are served by the regional council.

This enables any city councillor to be absolved of any responsibility for the bus service, as they can quite rightly say "that is a regional council matter".

Our local politicians are quite happy to comment on neurosurgery (a district health board matter), Cadbury (a matter for its American owners), the university and other matters outside their statutory responsibility.

I believe that it is OK, indeed desirable, for city councillors to be passionate about their city having a good public transport system.

Some candidates for both the Dunedin City Council and the Otago Regional Council have recently indicated their support for transferring the management of Dunedin's public transport network back to the city council.

Rogernomics reforms in the 1980s led to compulsory separation of transport operations from policy and funding.

As the DCC owned Citibus, they were obliged to hand management of the network to the newly formed ORC.

This rule has been revoked.

Legislation passed in the past few years has made it possible for a regional council to assign bus network management to another local authority, regardless of whether that authority owns a bus company.

This brings transport in line with other council business: for example, DCC subsidiary Delta competes fairly and openly against Fulton Hogan, Downer EDI and the like for city roading contracts.

Where the boundaries of responsibility are blurred, problems arise.

If the city installs decorative bollards or allows shop signs which prevent buses pulling in close to the kerb, this can make it difficult for elderly or disabled bus passengers.

If the regional council routes a bus service along a road only suitable for light vehicles, this may affect the city's ability to keep the road surface in good condition.

If all these decisions were made under one roof, by one transport department, we would have joined-up government. Who knows what this could achieve? How about adjusting bus fares and parking meter charges in a way that would stimulate bus ridership?

If the region handed back the bus network management to the city, they would be leaving it in good condition.

The ORC has overseen a hefty reduction in costs, thereby reducing the call on rates, albeit with a brief flirtation with lowest-quality providers a few years back.

Fares have roughly matched inflation over the long term, although putting off increases has led to a couple of recent fare gouges.

The Dunedin fleet is in great shape, with an unprecedented number of accessible low-floor buses, many powered by new low-emission engine technology.

Would the Dunedin City Council want it back? Discussions between the ORC and DCC have been dragging on for a couple of years now, and one can't help worrying that there is a lack of passion for public transport on both sides.

An election might be just the thing this debate needs.