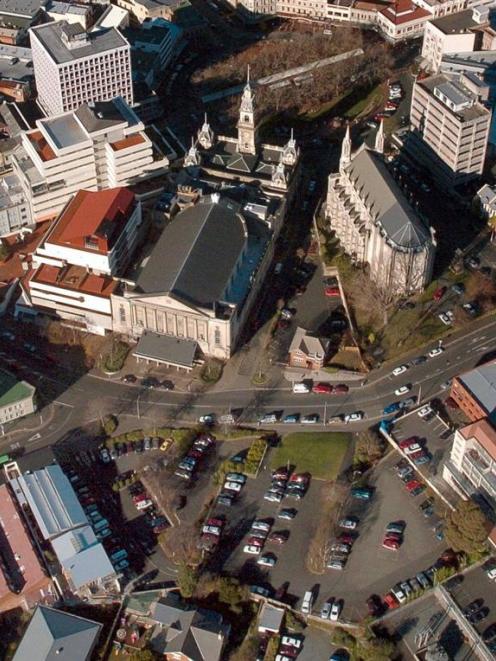 Dunedin's town hall (top), before its refurbishment. The Moray Pl car park, talked of as a site for a hotel since the 1980s, is in the right foreground. Photo by Stephen Jaquiery.
Dunedin needs a five star hotel, writes Dunedin city councillor Andrew Whiley.

Dunedin definitely needs a five star luxury hotel and we should get under way with planning and approving it today!

Mayor Dave Cull recently commented that Dunedin should have higher quality hotel space. I agree but we must act now rather than just talking about it. To understand why we need a high quality or five star hotel in Dunedin it is necessary to understand what is happening in Dunedin's and Otago's tourism industry.

Tourism in Dunedin and Otago is growing. David Loughrey's article (ODT, 19.7.15) highlighted why we need a new hotel. International visitor arrivals were expected to grow 4% per year in the MBIE's outlook until 2021, reaching 3.8million, up from 2.9million last year.

The strong growth was expected from China, with India and Indonesia as two of New Zealand's emerging markets.

In the same article, Neil Harraway (Monarch Cruises) emphasised that high end accommodation was something he knew the city needed: ''I know, because I've been talking to, at Trenz and other places, high end wholesalers and inbound tourism operators.

''They are looking for great accommodation and there's not enough of it - this is high, high standard accommodation, five star and better''.

So it is not what the mayor or a city councillor like me thinks or the odd tourism operator believes, it is what the inbound operators are expecting and demanding. They will sell Dunedin as a package to maximise a return and if we have a five star hotel they will come.

We will also need to increase our quality of local tourism products so that Dunedin can be sold as ''destination package'' generating more reasons to visit the city, and stay longer. We are already a great ''tourism city'' but we must increase our offerings based on demand which will result in more jobs and tourism dollars being spent here.

Tourism growth last year was 5% and at the end of August, China Southern Airlines announced it will establish a new service to Christchurch. This will add 70,000 more seats into Christchurch, and the South Island, adding more than $100million in visitor spending.

Dunedin is attractive to these inbound tourists and the Christchurch Queenstown Dunedin triangle is proving to be an important tourism route that encompasses the best of the South Island. For me, the logical location for a new hotel is in the DCC car park on Moray Pl, across from the town hall.

That's because it connects to the Town Hall and Convention Centre which is, at present, the largest in the South Island.

The convention business and Dunedin's reputation for conferences is growing. There were more than than 161,726 delegate days for year to June 2014, an increase of 69.5% from the 2013 year. Another strong increase is expected for 2015.

Domestic delegates spend about $482 a day, totalling about $17.5million a year. International delegates are staying in the city for 5.7 days on average.

Therefore, more conferences and the ability to attract larger conferences really adds value across Dunedin's economy. It is important for the city to clearly communicate what the hotel will look like to the public, how it will partner with the city, blend with the landscape and integrate with the community.

Dunedin must then present this package to any potential hotel developer to outline the details of size, height, quality of rooms and hotel facilities (i.e. additional conference facilities) and any requirement for an internationally branded property such as Hilton, Hyatt or Novotel.

It would be clearly understood by any local, national or international investor that the Dunedin City Council had already zoned the property for a hotel development and would be open to fast track appropriate tenders through the planning process.

This would remove any hurdles or barriers that have created problems in the past and reduce any delays in construction so that a hotel could be built sooner, rather than later.

When this five star luxury hotel is built, it will be a success. It will also be successful for the wider Dunedin accommodation sector with the increased marketing and profile a high end hotel chain will bring to the city.

Overall, it will assist the city in ''destination marketing'', thus attracting more tourists to the city. The existing hotels and motels, including the new Distinction Hotel (old CPO), will always be important to the city but the tourism market wants more.

By meeting the demands of the market, all of Dunedin will benefit. Occupancy rates will increase, providing more customers for the hospitality scene, increasing visits at our famous attractions and supporting a stronger sporting and concert scene.

The additional jobs and more dollars injected into our city and region will be notable. Build it and they will come!