Not pre-election ploy, but a pointless cock-up 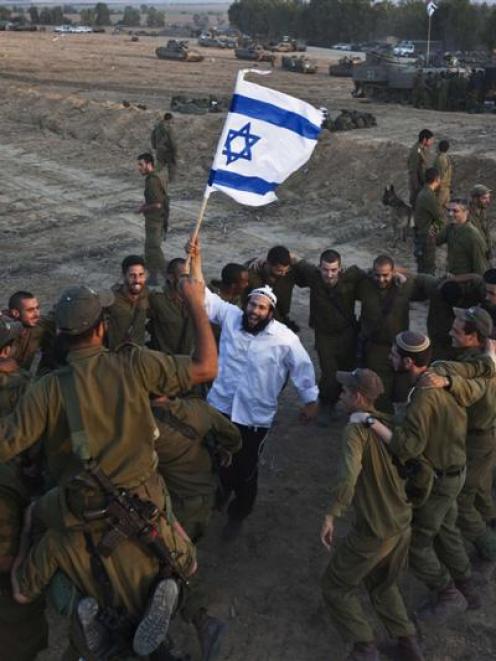 A Hasidic Jew waves an Israeli flag as he dances with Israeli troops yesterday during a visit to support the soldiers near the border with the Gaza Strip. Photo by Reuters.
Let's be fair: there does seem to be some sort of pattern here, but it is not very consistent.

Five times in Israel since 1980 a right-wing government has called an election WITHOUT launching a complementary military operation. The Right lost two of those elections outright (1992, 1999), more or less tied two others (1984, 1988) and won only one decisively (2006).

On the other hand, critics of Israel point out, three times since 1980 right-wing Israeli governments have combined an election campaign with a major military operation against some Arab or Palestinian target. And this combination, it has been argued, yields decisive electoral success for the Right.

Menachem Begin's government won the 1981 election three weeks after carrying out a dramatic attack on the Osirak research nuclear reactor that France had sold to Iraq. In the view of most outside observers, the reactor, which was closely supervised both by the French and by the International Atomic Energy Agency, was not suited to the large-scale production of enriched uranium and posed no threat to Israel, but the attack was popular in Israel.

Ehud Olmert's coalition launched the "Cast Lead" onslaught against the Gaza Strip in December 2008-January 2009. The three-week campaign of massive bombardments and some ground incursions left 1400 Palestinians and 13 Israelis dead. The election was held a month later, and Binyamin Netanyahu emerged as the leader of a new right-wing coalition.

So here we go again, perhaps?

Mr Netanyahu is still the prime minister, and the next elections are due in January. What better way to ensure success than to go and bash the Palestinians again?

A week later, with 86 Palestinians and three Israelis dead, his re-election is assured: Israelis overwhelmingly support the current military operation.

That's the case that is made against Israel. Does it hold water?

Well, actually, no, it doesn't.

Mr Begin's attack on the Osirak reactor in 1981 may well have been an electoral stunt, although he was clearly paranoid about the possibility of a nuclear weapon in Arab hands.

But Ehud Olmert, though undoubtedly a man of the Right, was not leading a right-wing government in 2008. He was the leader of a new centrist party, Kadima, that had been formed by defectors from both the right-wing Likud Party and left-wing Labour.

Moreover, Mr Olmert had already resigned in mid-2008 over a corruption scandal, and was merely acting as interim prime minister by the time the "Cast Lead" operation was launched in December of that year. If it was an electoral ploy despite all that, it didn't work. It was the Right that actually won the election in early 2009, and formed a government led by the Likud Party's Mr Netanyahu.

It is equally hard to believe that Mr Netanyahu is seeking electoral gain by attacking Gaza this month. Every opinion poll in Israel for months past has been saying that he is going to win the January election hands down. For him, all the risk of "Operation Pillar of Defence" is on the down side: a major loss of Israeli lives in the campaign, while unlikely, could only work against him.

So why is this happening now?

Historians traditionally split into two camps: those who see purpose and planning and plots behind every event, and those who think most events are just the random interaction of conflicting strategies, imperfect information and human frailty. This latter approach is known in the historical trade as the "cock-up theory of history", and it is very attractive as an explanation for the current situation.

Mr Netanyahu, cruising home to an easy electoral victory in January, had absolutely no need for a little war with the Palestinians. Indeed, his strategy of continuously shouting "wolf" about Iran and its alleged nuclear weapons programme has succeeded in distracting international attention from the Palestinians, leaving him free to expand Jewish settlement in the occupied West Bank unhindered.

Similarly, the Hamas leaders who ruled Gaza had no interest in triggering a military conflict with Israel. They had every reason to believe that the sweeping political changes in the Arab world were strengthening their position internationally, and they had no need to remind Arabs of their plight. So how did this idiocy happen?

Another cock-up, of course.

Hamas has been trying to maintain calm in Gaza and extend a ceasefire agreement with Israel, but it has little control over various radical jihadi groups who build popular support by making utterly futile rocket attacks on Israel. Even if they kill a few Israelis, so what?

How does that serve the cause?

Hamas faces the permanent political danger of being outflanked by more extremist rivals, so it cannot crack down too hard on the jihadis.

Israel, fed up with their pinprick attacks, was looking for somebody to punish and since it couldn't locate all the jihadi leaders, it decided to assassinate Ahmed al-Jaabari, the head of the military wing of Hamas.

Even though that was bound to end the ceasefire.

So then Hamas fired a few of its own rockets into Israel, and Israel retaliated massively, and we were off to the races once again. A complete cock-up, and a pointless waste of lives.

But since the mini-war doesn't really serve the purposes of any major player, it will probably be shut down again fairly soon.