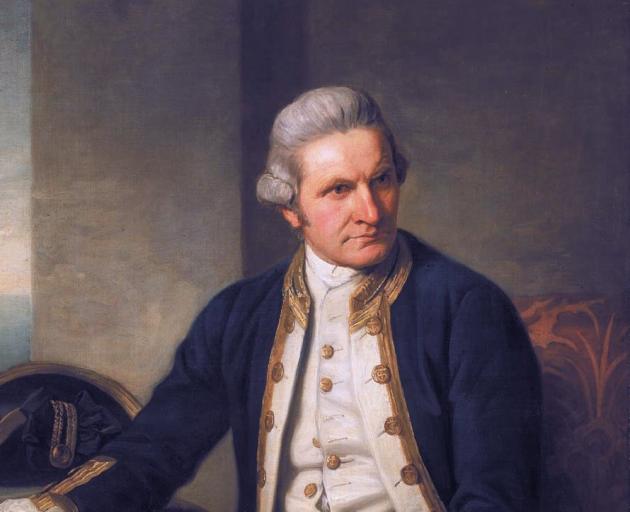 Captain James Cook
I was wandering aimlessly around the airport on Tuesday morning, after arriving horrifically early for my flight, when I chanced upon a brightly coloured children's picture book.

Written by Tania McCartney, and illustrated by Christina Booth, This is Captain Cook tells the story of a delightfully inquisitive Captain James Cook, as he befriends the shy and accommodating Tahitians, studiously maps the outline of Aotearoa, and brings light and joy to every Pacific shore.

Of course, in reality, Cook's first encounter in Aotearoa involved the murder of innocent local Maori, theft, and kidnapping. The diaries of Cook and Joseph Banks reveal that such actions were not isolated.

Colonialists criss-crossing the Pacific bought rape, murder, kidnapping, theft, and infection to numerous devastated communities. Crew members of Cook's various voyages (and those of his counterparts) report that sex with locals, including the rape of girls as young as 9, was incredibly common.

I probably shouldn't be surprised at the whitewashed, bowdlerised, and painfully scrubbed version of history in This is Captain Cook. After all, rape, murder, and the lingering, painful effects of colonialism aren't really all that palatable for a children's story.

I also shouldn't be surprised by the way in which this myth of the colonial hero has pervaded the kindergarten schoolroom. I've witnessed first-hand how narratives of the ''white harbinger of civilisation'', to quote Ganath Obeyesekere, are woven throughout the sporadic history lessons one learns in primary and secondary school.

New Zealand has a reputation overseas for being a leader of progressive social change. In many ways, this is true, yet in one of the most fundamental ways, we lag disastrously behind most other countries.

We don't even know how much New Zealand history is being taught in our high schools. Social studies is a compulsory subject at year 9 and 10, but as pupils leave year 10, New Zealand history fades out of the curriculum, unless specifically chosen by the pupil. NCEA's curriculum itself envisions classrooms wherein ''young people ... will work to create an Aotearoa New Zealand in which Maori and Pakeha recognise each other as full Treaty partners, and in which all cultures are valued for the contributions they bring.''

How can this be achieved when the rich stories of our shared culture are not encouraged and promoted in classrooms?

There is so much fascinating history to learn. No doubt a great deal of our history is raw and discomforting, but it is nevertheless important to learn in its entirety. Education is a vital and fundamental disinfectant against biased myths and stories.

History teachers across the country are not necessarily to blame for this ignorance. In 2001, Linda Levstik found that students are less interested in studying New Zealand history than in learning about other parts of the world. But such attitudes can, and should, be dissected and confronted. Levstik argues that this desire to look outward may originate from a discomfort to engage with the difficulty of our past, and the relative ''safeness'' of learning about distant stories of the wider world: ''Membership in local communities of identification makes it difficult for these students to take the perspective of local others.''

But without confronting the injustice and inequality in our history, we cannot learn and move on from the mistakes of our shared past.

Earlier this year, a petition was launched that called for changes to address New Zealand's students general ignorance of their country's history. According to the chairman of the History Teachers' Association, Graeme Ball, the number of people who learn about New Zealand's history is ''shameful.'' The petition called on Parliament to pass a law to ''make compulsory the coherent teaching of our own past across appropriate year levels in our schools''.

''Too few New Zealanders have a sound understanding of what brought the Crown and Maori together in the 1840 Treaty, or of how the relationship played out over the following decades. We believe it is a basic right of all to learn this at school (primary and/or secondary) and that students should be exposed to multiple perspectives and be enabled to draw their own conclusions from the evidence presented in line with good historical practice,'' the petition said.

In year 7, I was tasked by my teacher to draw up a family tree. I became enthralled by the tales of my great grandparents, who had been unceremoniously shuffled off their land in the Highland Clearances, and forced to eke out a living in and on the sooty streets and wharves of Glasgow. I pitied their trials and tribulations, and marvelled at their strength in overcoming the difficulties life had hurled at them. In turn, I felt incredibly sad and uncomfortable upon learning of my family's contribution to land clearances in Australia and New Zealand. The irony of the displaced Scots displacing Aboriginals and Maori was not lost on my 13-year-old self.

Being ignorant of one's history leads to a general ignorance of one's culture. Moreover, as has been demonstrated ad infinitum over the centuries, crooked politicians, manipulators, and propagandists latch on to those who are ignorant of history, as they are more easily lied to. I am hardly surprised by the usual wave of racist remarks and ignorant commentary that surfaces every time Maori issues are reported upon by the media, be it the details of a Waitangi Tribunal hearing, or the current debate on whether te reo should be made compulsory in our schools.

As writer and philosopher George Santayana once observed:''Those who cannot remember the past are condemned to repeat it.''

All the way to Oxford to learn that the only thing England did was colonial rapine and terror? What an ignominious disaster.

Read about the Holy Trinity of English documents that were gifted to the world. The Magna Carta, Habeus Corpus, and the Declaration of Independence. That's a good historical start. Then try and build something, not tear it all down.