Rear ends on show in Dunedin 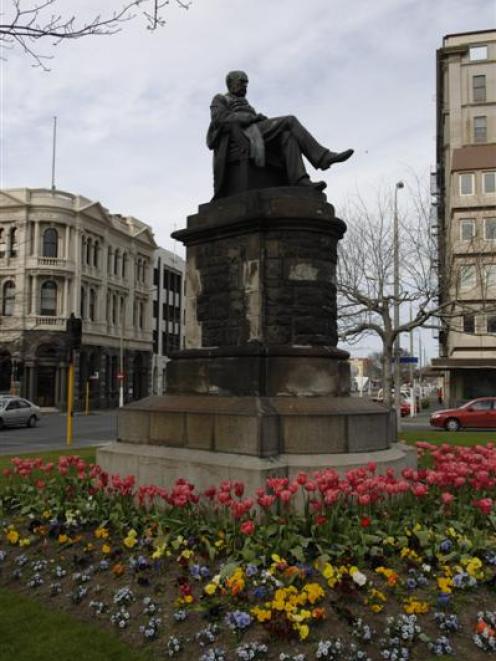 The Dr Stuart memorial in Queens Gardens, which presents his "unsightly rear view" towards passing traffic as he gazes over what is now the wasteland of a car park. PHoto by Linda Robertson.
Chris Skellett notices that life in Dunedin has been getting a little back to front.

In recent weeks, I've become increasingly aware of a puzzling theme to my life in Dunedin.

I've also known that I usually park behind the town hall.

But recently, upon receiving an invitation to a meeting in lower Moray Pl, I noticed that the venue was described as being behind Countdown supermarket.

I suddenly realised that throughout Dunedin we are increasingly defining our positions with respect to the buildings that we find ourselves behind!

My daily drive behind the station also takes me behind the Otago Settlers Museum - what an ugly new slab-concrete wall.

I also find myself behind the Chinese garden - not its prettiest side.

In terms of the public profile for both of these new developments, this seems to be a significant opportunity missed.

All I can see is their dull rear ends.

If I take my alternative route along Cumberland St, then I still find myself looking at depressing rear views. Firstly, I look at the rear of the old central post office (surely one of Dunedin's finest buildings when viewed from the front) and then I'm looking up at the rear of First Church as viewed from Queens Gardens, perched alarmingly on top of an ugly cliff.

It seems that wherever I go, I am increasingly spending my time looking at the backs of our city's fine buildings, rather than their fronts.

Earlier in the year, there was a mini furore about the orientation of the statue of the Rev Dr Stuart in Queens Gardens.

Due to a series of roading realignments over the years, he finds himself obliged to stare mindlessly across a car park towards the unsightly rear view of a row of buildings in Princes St.

Worse still, passing motorists are also now obliged to stare mindlessly at the Rev Dr Stuart's own unsightly rear view, as they sit and wait for the lights to change.

It's all just so wrong.

Now, I'm generally not averse to taking an alternative point of view.

I'm also aware that in my youth, many of my most exhilarating moments occurred behind a variety of unusual buildings.

But this seems to be a bigger issue than just some weird personal preference of mine.

Something very odd is going on around town.

Overall, it seems that it is the domination of the one-way system that is largely responsible for all this back to frontness in our city.

If we head north from the city centre, we are soon confronted with the sombre rear wall of the hospital oncology building.

This drab rear view, however, is quickly countered on the other side of the road by the brightly coloured mural painted on to the back wall of Ombrellos restaurant.

But they are still both rear views.

Driving south is no better.

They all pass in quick succession, and they are all uniformly dull.

The central city retail developers have also contributed to the problem.

By primarily focusing on George St, they make only passing use of the roads that run on either side.

As a result, both Great King St and Filleul St have become a strange collection of rear views and rear entrances to buildings.

The Dunedin City Council, to its credit, has done a sterling job in attempting to counter this alarming trend towards rear views.

The town hall actually seems to have two fronts, one in the Octagon and one in Moray Pl.

Also, the new Wall Street development proudly boasts a number of entrances that could all be perceived as "fronts".

This feature does have its drawbacks, however, as I recently found to my cost.

I had arranged to meet a colleague outside the front entrance to Wall Street for a lunch date.

And the problem is continuing.

There are currently two major roading developments under consideration in the city.

The first concerns the controversial rerouting of State Highway 88 behind the Forsyth Barr Stadium.

The second concerns the contentious realignment of Lovelock Ave behind the Dunedin Botanic Garden.

Spot the similarities? Practical planning, perhaps, but have they considered what the views will be like as we drive along them? I don't think so.

The more you think about it, the weirder it all becomes.

Dunedin is such a funny old place to drive around these days.

It seems that we have almost turned ourselves inside out and back to front since the early settlers first arrived.

It is important that the city looks good and feels bold.

We need to present our best face to the world and to feel proud of who we are.

We should not be spending all this time ducking and diving behind buildings.

With the elections now behind us, perhaps it's time for us to recalibrate ourselves as a community, to agree on our best aspects and to present ourselves with a collective sense of confidence about who we are and the direction in which we are heading.

Time, perhaps, for us to rediscover the simple art of fronting up, both physically and metaphorically.