Recalling the past — and its ghosts 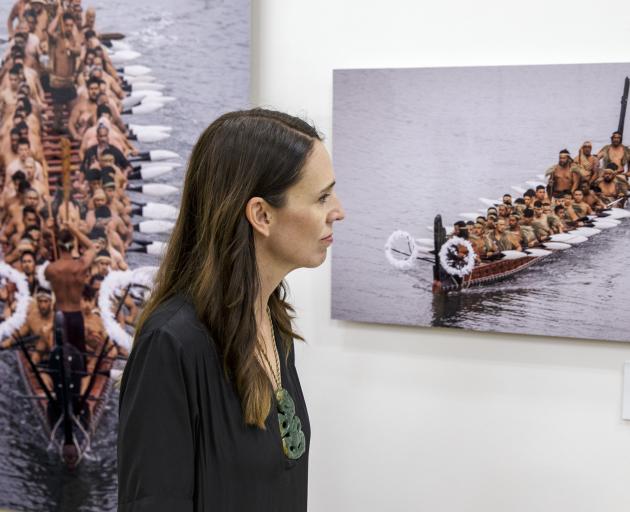 Prime Minister Jacinda Ardern inspects photographs of waka as she visits the He Kaupapa Waka exhibition, Te Kongahu Museum, at the Waitangi Treaty Grounds earlier this month. The Government recently announced an Aotearoa New Zealand history curriculum for schools. Photo: Getty Images
The National Party started this. Back in 2016, when the clamour for a more fulsome historical accounting of Maori-Pakeha relations was rewarded with an official day for commemorating the dead of the New Zealand Wars.No less a personage than National’s deputy-prime minister, Bill English, declared that the moment had come "to recognise our own conflict, our own war, our own fallen, because there is no doubt at [the Battle of] Rangiriri ordinary people lost their lives fighting for principle in just the same way as New Zealand soldiers who lost their lives fighting on battlefields on the other side of the world".

To which I responded with a heartfelt "uh-oh!"

Or, in the words of a slightly more coherent response, penned shortly after English’s woefully ill-judged observation:

"Of one thing we can be certain [...] the dead who have slept for one and a-half centuries beneath the disputed soil of Aotearoa will have a very different story to tell. There is a reason why so many of the signposts to old battle sites are weathered and overgrown; why lichen has been allowed to obliterate the names of those who fell. Sleeping ghosts, like sleeping dogs, should never be needlessly awakened."

Pish-tosh! The government of Jacinda Ardern is having none of that self-serving colonialist amnesia. The recently announced Aotearoa New Zealand history curriculum — compulsory, no less — is all about issuing our kids with scrapers, cleaning agents and scrubbing brushes, and setting them to cleaning up all those lichen-covered monuments.

During his famous "Long March", the Chinese communist leader Mao Zedong and his followers were required to traverse the same mountain pass where an earlier revolutionary army had been wiped out. "Fear no ghosts!", Mao reassured his superstitious peasant soldiers: "The past does not return!"

But Mao’s confidence was misplaced. If you ask it to return often enough, the past, just like the murderous ghost in the horror film, Candyman, is only too happy to oblige. The results are seldom pretty.

Reading between the lines of the Government’s draft history curriculum, the full extent of its revisionist ambitions soon become clear. Rather than the history of the colony-cum-nation-state that the world knows (pro-tem?) as New Zealand, the next generation of young New Zealanders will learn that the history of these islands actually began somewhere between 1000 and 800 years ago. In other words our national narrative must be understood as a Maori — not a Pakeha — story.

Indeed, the role assigned to the Pakeha in this narrative is almost entirely negative. At best, they might be described as disruptors. At worst, they will be painted as destroyers and appropriators: agents of an alien power that imposed its will unjustly on Aotearoa’s original inhabitants. If the history of this country is envisaged as a Hollywood western, then the Pakeha are wearing the black hats — they’re the baddies.

The logic of this new, profoundly revisionist, historiography is inescapable. If the story of Aotearoa is a Maori story, then the Pakeha intervention can only be understood as something temporary. Colonialism, and all the damage it inflicted on Aotearoa’s natural environment, and the culture of its indigenous population, will be presented as an historical phase through which it is passing. The direction of travel is clear: from a Maori past, towards a Maori future. And the Pakeha? Well, the Pakeha are tauiwi: strangers, outsiders, foreigners — just visiting. For them, the message could hardly be clearer: When in Aotearoa, behave like an Aotearoan — not a Roman.

All this is a far cry from the idea that Aotearoa-New Zealand is the creation of historical forces too vast for blame, too permanent for guilt, colliding in time. The achievements of the diminutive nation-state emerging from that historical collision once astounded the world.

In the 1958 edition of the Richards Topical Encyclopaedia, New Zealand’s entry is headed: "The World’s ‘Model Nation"’. The sub-heading is worth quoting in full:

"How little New Zealand, starting her career amid wars and many money problems, built up for herself a government so sound and humane that she came to be called the best-governed nation in the world."

I like that story much better than the one embedded in the new curriculum. It’s an historical narrative in which all this country’s inhabitants once took enormous pride, and could again — if only the dead are allowed to sleep.

Whatever has happened to Chris Trotter? I can remember looking forward to reading his columns, full of hope, ideals, challenging perspectives, they made you think. The Chris Trotter I grew up with used to make a habit of challenging the ghosts of the past, telling us to never forget the many past injustices inflicted upon us by too many partisan govts. At least that's what I recall.
He appears to be entering some sort of reactionary, conservative, nostalgic, dottage, remembering a NZ that never really existed.
His reference to the 1958 Richards encyclopaedia being a case in point. Was NZ the best governed country in the world? Guess it depends on your point of view. An education system that was designed to keep the working class in their place, that is out of universities, keep Maori in the Pa where they belonged, kept women subjugated as second class citizens, as the Bible demanded, gave the churches far to much power, operated a protectionist controlled import systems where licence to import goods were tightly controlled by the Minister, local industry was kept viable by paying massive subsidies, likewise exporters. I could go on. Trotter is using rose tinted glasses.

I remember ideological schooling. Woodwork for boys, Cooking for girls. At year's end, girls cooked scones for boys. We didn't even present them with a wood ashtray, or similar.

Chris, you've really missed the boat this time. Where to begin!

The cold hard fact that New Zealand was indeed populated 800 to 1,000 years before Europeans arrived, by ancestors of today's New Zealanders, makes it a part of New Zealand history. All our history. To suggest otherwise is an incredibly separatist view. Maori history, Pakeha history, call it what you will, but it is ALL undeniably New Zealand history.
"The role assigned to the Pakeha", is perhaps more appropriately described as "The role British settlers actually played...". Because Chris, rather than "sleeping ghosts" being awakened, it is more accurate to suggest we're finally addressing the elephant in the room. As such, everyone's ghosts, Pakeha and Maori alike, can finally rest in peace.
What exactly makes this "new" curricula "profoundly revisionist"? Nothing I can see, except perhaps facts! Except perhaps that every historian or anyone with even the slightest knowledge of New Zealand history, ends up with a view along the lines of this "narrative".
The fact that you, and many other kiwis, have lived within a precarious bubble of propaganda, for far too long, doesn't mean we should continue to do so.

It is not 'negative' that Maori were here first. The author is unfamiliar with the 1960's Secondary Schools component NZ History.

If the new history curriculum is accurately addressing New Zealand ‘s collective history, then it is a two-way path, walked by both Maori and Pakeha. If the historical and considerable positive contributions of Pakeha New Zealanders are not a significant part of that story, then something is missing, and the new narrative is biased in terms of how our country evolved and became the modern much-admired place we hold close to our hearts today. The truth is, both Maori and Pakeha endeavours were not always well intended, the key here is the word “both” and recognition of an - at times - wider human failing of all humanity who dwelt upon this land, inter-tribal wars, slavery, murder, all the hall marks of human conflict existed pre-European and also after, no one group was perfect. We acknowledge atrocities took place; we know our collective history. Yet equally important were the positive and meaningful developments of this land into a modern high functioning society, primarily set-in motion by the new settlers. Our journey continues, flawed, beautiful, troubled, exceptional, unique and unknown, However, it will only be possible if we really are “a team of Five Million.” Are we?

Absolutely. Address racism - the finding of fault due to race.

Tired of complaints about 'Maori getting everything'.

Well apart from your apparent sensitivity to your opinions being considered racist, we are not that far apart. Although I would argue that our modern high functioning society dates only from 1984. There was very little of our society that was modern or high functioning before that, certainly the early settlers had very little to do with it. There has been the occasional visionary since 1840 but all of them, maori and pakeha, were put down quickly. I'm all for representing and teaching our history to our children in a fair and balanced way, we have never achieved that in the past, it's time to open eyes and minds and try a new way, in keeping with continuing journey, flawed, beautiful, troubled, exceptional, unique and unknown,

I find your comments both naive and offensive.
It seems to me you are entirely focussed on the negative elements of Maori history and the positive elements of European history. You claim to be seeking a balanced outcome in how the new curriculum is presented, but your comments leave me with an underlying feeling that you are desperate to show the European influence as the only positive influence. I find it racist in its outlook and presentation.
I know a lot of pakeha New Zealanders who share this outlook. I have concluded that it is fear-based and grounded in ignorance. You along with a lot of adult Kiwis would do well to read the works of Michael King, James Belich, Claudia Orange and others who have presented scholarly and well researched histories. These will most likely form the basis of the new NZ history curriculum.

It never ceases to amaze me how quickly today the baited accusation of “Racism” is so easily and naively dropped into a response to someone whose comment or opinion you do not agree with, rather than an insightful discussion free of emotive fragility. I recall many conversations with Maori that I have talked with over the years, on our collective past and future, they have been very open about their own ancestral history both the good and the bad, on the tactics and exchanges between various tribes and interactions with Europeans - of which not all were negative experiences. They (Maori) are often far more honest and down to earth on the subject than Western scholar’s and academics who frequently walk on eggshells around what they have deemed to be “sensitive subjects.”