Today, another revolution is afoot: the development of the so-called "super shoe", which is driving another spike of record toppling in endurance running.

The new shoe technology was introduced to road running in 2016 and track running in 2019, and since those key dates virtually all endurance running world records, from the 5000m to the marathon, have been broken.

This has divided opinion in the athletics world, some arguing the shoes are unfair while others argue they’re just like synthetic running tracks: an inevitable technological leap for endurance runners to capitalise upon.

While super shoes are clearly disruptive to old records — some of which have stood for decades — this technology should simply be seen as another entry in sports’ long list of performance-enhancing innovations.

In the 2016 Olympic marathon, all three male medallists climbed on to the podium in the same shoes.

They were a Nike prototype, later released as the Nike Vaporfly 4%, which are now almost ubiquitous on the feet of elite road runners.

The performance enhancement afforded by both types of super shoe — the trainer and the track spike — is generated by enhancing athletes’ running economy, which means reducing the energetic cost of running at a given speed. 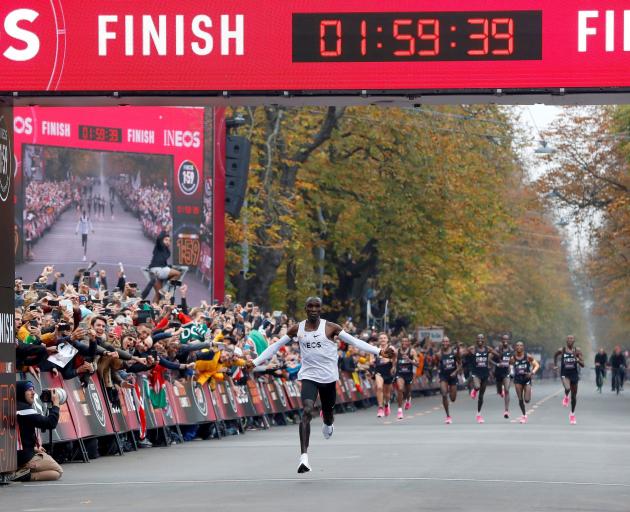 Kenya’s Eliud Kipchoge breaks the 2hr marathon threshold in 2019 wearing Nike’s super shoes. PHOTO: REUTERS
The original Vaporfly improved the running economy of highly trained runners by about 4% when compared with a control marathon shoe — hence the 4% moniker. In practice, this equates to a rough improvement in running performance of 2% to 3%.

The shoes have delivered on this claim. Since the 2016 advent of the Vaporfly, the times of the top 50 male marathon runners have improved by about 2% on average. For the top 50 female marathon runners, that figure is closer to 2.6%. Nike’s track spikes are considered to be delivering significant running economy boosts to athletes, too.

Several footwear features are behind this performance boost. They include the shoe’s weight, its material composition, the thickness of its heel, and its "longitudinal bending stiffness", which is how flexible the shoe is from heel to toe.

The inclusion of a carbon fibre plate, running from heel to toe within the foam sole, has been the headline-grabbing innovation. These plates aren’t actually a new concept, but their specific scoop shape is being credited for the latest performance enhancement. It causes a "teeter-totter" effect, which effectively helps return energy to the runner each time their foot strikes the ground.

To understand Nike’s new super shoe, it helps to look within its sole.

The Vaporfly also uses PEBA foam, which stores far more energy from foot strikes, and returns more energy to the runner, than the TPU and EVA materials traditionally used in trainers. PEBA foam is also lighter: the Vaporfly weighs about 50g less than previous competitors.

Finally, the shoe’s heel thickness of up to 40mm is about 10mm thicker than that of other racing shoes. That’s partially to accommodate the other technology in the shoe, and partially to increase the wearer’s leg length, which helps energy saving. The above features have likely formed the basis for Nike’s new track spikes, too.

When Eliud Kipchoge broke the 2hr marathon barrier in an unofficial race in 2019, beating his own world record of 2:01:39, he was wearing super shoes. But everything else — his race kit, the course design, his pacing and training strategies — all of it was exhaustively researched and scientifically optimised.

Similarly, advanced footwear is certainly helping track athletes run faster. But other innovative tools — such as the wave-light pacing technology, used during the 5000m and 10,000m world records in 2020 — may also contribute to increased speed.

World Athletics, endurance running’s governing body, issued updated guidance on footwear in August last year, permitting a heel thickness of up to 40mm in road running shoes and 25mm in distance running spikes. Many have called for more restrictions.

There are parallels to other sports. The introduction of full-body, Nasa-designed swimsuits to competitive swimming in 2008 was held responsible for world records being toppled that year. The full-body suit was quickly banned, though the technology lives on in a reduced form.

The super shoe arms race will inevitably spread to sprint distances soon. New technology will usher in a new cohort of world record holders. During this process of leaderboard recalibration, greater emphasis should be placed on results as opposed to times. After all, regardless of the technology, it’s titles that transcend generations, and medals that last longer than times. — theconversation.com