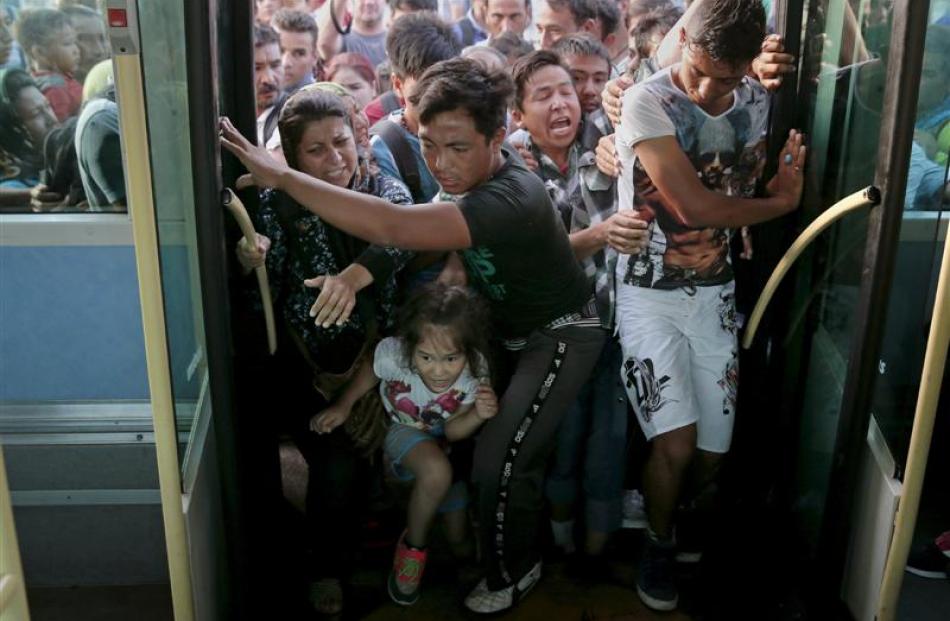 Refugees and migrants push and jostle as they try to board a bus this week following their arrival from a passenger ship at the Greek port of Piraeus, near Athens. Photo by Reuters.

When United States Secretary of State John Kerry phoned Russian Foreign Minister Sergei Lavrov warning him not to ''escalate the conflict'' by increasing Moscow's military support for the beleaguered Syrian regime he stamped his foot quite hard, telling Mr Lavrov that his Government's actions could ''lead to greater loss of innocent life, increase refugee flows and risk confrontation with the anti-Isil coalition operating in Syria''.

What the Russians have actually done, so far, is to send an advance military team to Damascus of the sort that is normally deployed to prepare for the arrival of a much larger military force.

They have also sent an air traffic control centre and housing units for its personnel to a Syrian air base.

It suggests Moscow is getting ready to go in to save President Bashar al-Assad's regime.

It has given Mr Assad diplomatic support, financial aid and some weapons over the course of the 4-year-old Syrian civil war, but it will take more than that to save him now.

That would include at least an airlift of heavy weapons, but maybe also direct Russian air support for Mr Assad's exhausted troops.

They need it. Since the fanatical fighters of ''Islamic State'' (or Isil, as the US State Department calls it) captured Palmyra in central Syria in May, they have advanced steadily westward from their new base.

One month ago, they captured the mostly Christian town of al-Qaratayn, northeast of Damascus.

(The inhabitants fled, of course).

And now IS forces are within 30km of the M5, the key highway that links Damascus with the other parts of Syria that remain under government control.

The jihadis captured Palmyra, by the way, because the ''anti-Isil coalition'' - the US Air Force, in practice - did not drop a single bomb in its defence.

It made at least a thousand air strikes to save Kobani, the Kurdish city on the border with Turkey that was besieged by IS fighters, because the Kurds were US allies.

Whereas Palmyra was defended by Mr Assad's soldiers, so the US let Islamic State have it.

One can imagine Mr Kerry's (and Mr Obama's) horror at the idea that by defending Palmyra they would be seen as protecting Mr Assad's brutal regime, but if Islamic State troops manage to cut the M5 it will be seen as a sign of the regime's impending defeat.

At that point, up to half the people who still live in government-controlled areas, about 17 million, might panic and start trying to get out of Syria.

They would obviously include the religious minorities (Christians, Alawites, Druze), five million people who have good reason to fear slavery, rape and murder at the hands of Islamic State.

The millions of Sunni Muslims who have served the Syrian Government and its army would also be at risk.

So let's say four or five million more refugees pouring out across Syria's borders, to join the four million who have already fled.

What they left behind would be a Syria entirely controlled by the extremists.

The only remaining question would be whether they roll on through behind the refugees, overrunning Lebanon and Jordan as well, or whether they fall to fighting among themselves.

All three major Islamist groups - Islamic State (which Turkey and Saudi Arabia no longer support), and the al-Nusra Front and Ahrar al-Sham (which they still do) - are virtually identical in their ideology and their ultimate goals.

However, they have some tactical differences, and Islamic State and al-Nusra fought a quite serious turf war last year, so maybe they will get distracted again.

But even if they do, Syria will be gone.

This is what the Russians see coming, and they might be willing to try to stop it.

When asked last Friday if Moscow intended to get involved directly in the Syrian fighting, Russian President Vladimir Putin would only say that the question was ''premature''.

Nobody, including the Russians, likes Mr Assad's regime, but it is the least bad remaining option.

Indeed, it is the only alternative left to a jihadi victory.

Most of the ''moderate'' anti-regime rebels went home or fled abroad years ago, unable to match the jihadis in firepower, in money or in frightfulness.

The notion that the US can now create a moderate ''third force'' able to defeat both the jihadis and the Assad regime is a shameful face-saving fantasy.

Moscow used diplomacy to save the Obama administration from itself two years ago, when Washington was getting ready to bomb Mr Assad's forces in response to a (possibly spurious) allegation that they had used poison gas on civilians.

The only way Russia can avert disaster this time, however, is to put its own air force into the fight, and maybe its own ground troops, too.

If it does, the key question will then be whether the United States lets Russia do the job that it is too fastidious to do itself, or whether it gives in to the clamour of its Turkish and Saudi allies - and they would be clamouring - to ''stand up'' to the Russian intervention.

Since the United States doesn't actually have a coherent strategy of its own, it's impossible to predict how it will respond.

For all Mr Kerry's bluster, they don't know yet in Washington either.