Signs of peace at last in Ukraine 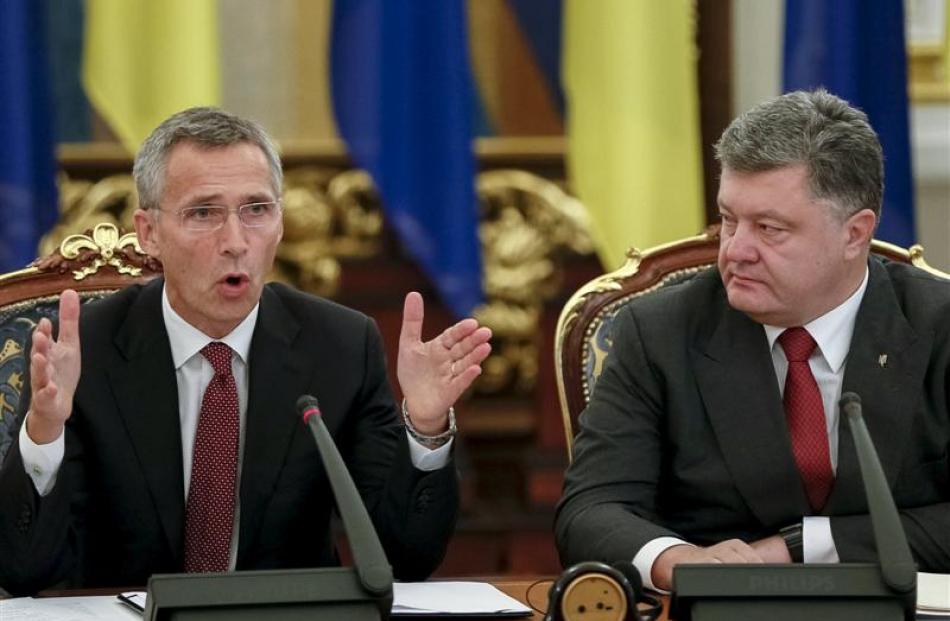 Ukraine President Petro Poroshenko (right) and Nato Secretary-general Jens Stoltenberg attend the meeting of the National Security and Defence Council of Ukraine in Kiev last week. Mr Stoltenberg said an ebb in violence in eastern Ukraine was not...

The ceasefire in the war in eastern Ukraine, the so-called Minsk-2 agreement, was signed last February, but they never actually ceased firing.

At least a thousand more people have been killed in the fighting since then, and on one night last month (August 14) the monitors of the Organisation for Security and Co-operation in Europe recorded 175 separate ceasefire violations.

On a visit to Kiev that week, British Defence Secretary Michael Fallon said the conflict was ''still red-hot'' and that he could not see an end to the fighting ''any time soon''.

As late as September 11 Ukrainian President Petro Poroshenko was condemning Russia's ''neo-imperial aggression'' in eastern Ukraine, where an estimated 9000 Russian soldiers are on the ground in support of the breakaway provinces of Luhansk and Donetsk.

But then the music changed.

When the annual Yalta European Strategy (Yes) forum opened in Kiev on September 12, Mr Poroshenko announced that the previous night had been the first in the whole conflict with no shelling.

Maybe that's all it is, but if it stops the shooting, that would certainly be a step in the right direction.

And by and large the shooting really has stopped in the past two weeks, although there is no sign yet that Russian troops are leaving Donetsk and Luhansk provinces.

Mr Poroshenko claims that the shift in Russian tactics is merely a switch from military offensives in the east to political attacks intended to destabilise Ukraine ''from the inside.''

He was presumably referring to a grenade attack outside the parliament building in Kiev on August 31 that killed three soldiers and wounded more than one hundred people.

But it is very unlikely that Russia was behind it, and Mr Poroshenko should know that.

It was really Russian President Vladimir Putin who took the initiative to stop the fighting, although it was his local allies who declared that they would observe a complete ceasefire from September 1.

Since the better-armed rebels, with Russian support when necessary, have consistently outfought Ukraine's ill-trained forces - all the changes in the front line since the ceasefire have been rebel gains from Ukraine - it was the rebels who had to move first.

They moved because Moscow has decided to freeze the conflict, which has now served its main purpose of saving Mr Putin's face.

He was deeply embarrassed when the Ukrainians overthrew the pro-Russian president in Kiev 18 months ago.

His illegal annexation of Crimea, like his encouragement and military support for the rebels in Donetsk and Luhansk, was partly motivated by his need to restore his political position in Russia.

Having ''lost'' Ukraine, Mr Putin also needed to ensure that it did not become a base for Western influence, and maybe even Nato troops, on Russia's southern border.

The best way of doing that was to ensnare the new government in Kiev in a chronic low-level conflict with Russia that would cripple Ukraine's economy and make Western governments very nervous about getting too close to it.

Those goals are now accomplished. Ukraine has effectively lost three provinces (all with Russian-speaking majorities), and a permanent military stalemate between Kiev and its rebel-held provinces means that the likelihood of its ever joining the European Union or Nato is approximately zero.

There is no need for further shooting, and Russia does have other fish to fry.

Right through the conflict in Ukraine, Moscow has avoided doing other things that would alienate the West.

It went on providing essential transit facilities for the American troops withdrawing from Afghanistan.

It co-operated with the West in the negotiations that led to the agreement on limiting Iran's nuclear ambitions.

It continues to transport Western astronauts to the International Space Station, since they have no transport of their own.

The cost of the old Cold War broke the Soviet Union, and Mr Putin's Russia is much weaker.

He just wanted to limit the options of a hostile Ukraine.

Now that he has succeeded it is time to freeze the situation and both Mr Poroshenko and his Western supporters have tacitly accepted that this is the least bad outcome.

They took a poll of the assembled experts at the end of the Yes conference earlier this month, asking what they thought Ukraine would look like three years from now.

Dome 53% of the Ukrainian participants, and 58% of the international guests believed that it would see economic growth and stabilisation despite a contained, ''frozen'' conflict in the east.

Only 3% of each group believed that it would see ''economic decline, destabilisation, and a further loss of territory.''

So move along, please, sir.

There is nothing more to see here.