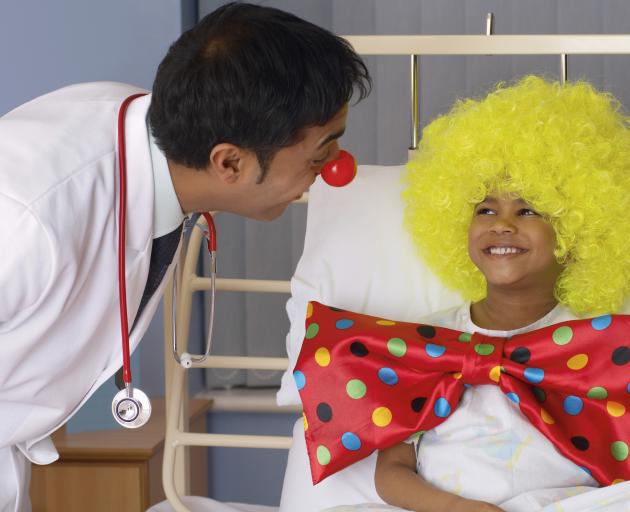 Out of emotional chaos, humour devises a form and crafts a meaningful sense of control. Photo: Getty Images
Even in a coronavirus crisis, laughter is the best medicine, writes Gina Barreca.

"Laughing together is as close as you can get without touching," I wrote in my first book, They Used To Call Me Snow White . . . But I Drifted: Women’s Strategic Use of Humor, published in 1991.

Laughter has always been the best medicine; I wasn’t exactly making any boldly original statement almost three decades ago.

I wasn’t expecting a MacArthur grant. But what I expected even less than a MacArthur grant was that the not-touching part of my line would eventually be part of a stentorian, global prescription to combat Covid-19.

Yelling "Don’t touch!" is how we now greet each other.

We’re learning the niceties of social distancing, which for some of us echo lessons learned in junior high when we were instructed to leave sufficient room between our dance partners and ourselves for the presence of the Holy Ghost.

I wasn’t good at social distancing in junior high — my Holy Ghost was remarkably thin, almost waif-like — but I am trying to learn now.

For example, I’m glad that we’re not elbow-bumping any more. Not only does it look intensely stupid, but since we’d also been told for a month to sneeze and cough directly into our elbows, I’d cross right over that elbow bridge if I were a germ.

You wouldn’t even need a disease E-ZPass if you were a determined little particulate — you could just hop the elbow turnstile and head on to a new host.

As an ageing Italian American woman, being instructed not to hug is like a dog being told not to wag its tail. To restrain myself these days, I picture people with swarms of mosquitoes buzzing around their heads.

Without that delightfully sophisticated image, I’m more than likely to forget myself, stroll up and ask what you’re making for dinner. And then you’d have to set us both on fire.

Why am I making fun of such a miserable time, you ask? (I can see the one asking: You’re the one with the pursed lips who’s tsk-tsking and shaking your head.) I’m making fun because jokes, mockery and humour are confessions of anxiety and worry, and laughter provides a collective atonement.

Since the first political cartoons appeared on the cave walls in Lascaux, comedy and humour have kept communities healthy.

Out of emotional chaos, humour devises a form and crafts a meaningful sense of control.

Humour insists on the most significant forms of freedom of assembly: the assembly of souls and minds, the community of the anxious and the brave (all of us at different moments), the gathering of storytellers, truth-tellers and eager listeners.

Some of the smartest and most inventive material I’ve seen online is the funny stuff.

Memes exaggerating our fears (a Mad Max villain in a full facemask and body armour poses against a post-apocalyptic landscape, saying "I’m heading to the store. Need anything?").

A video of a cat so manifestly displeased that its owners are in home quarantine, thereby disrupting the cat’s typical routine, made me laugh despite myself. And there’s Andy Crouch’s line: "Honestly hadn’t planned on giving up quite this much for Lent." Crouch is the former executive editor of Christianity Today. If he can make jokes, so can the rest of us.

The rest of us, to be honest, must keep our humour intact and make sure our supply of it is as reliable, accessible and replenishable as what we’ll simply refer to as "paper products for the home".

Why does comedy matter, especially during times of crisis?

Doesn’t laughter lighten our grasp on the tragedy of what’s befalling us?

Comedy doesn’t lighten the gravity of the situation, but it lightens our hearts. And that is a gift.

Comedy illuminates, offering clarity to those who are willing to focus. Humour can’t force you to move out of the gloom, but if you can sit at the virtual table, make conversation over the phone, offer and accept laughter, these will remind you of the delights of being alive today — which is all anyone has ever had. — TCA