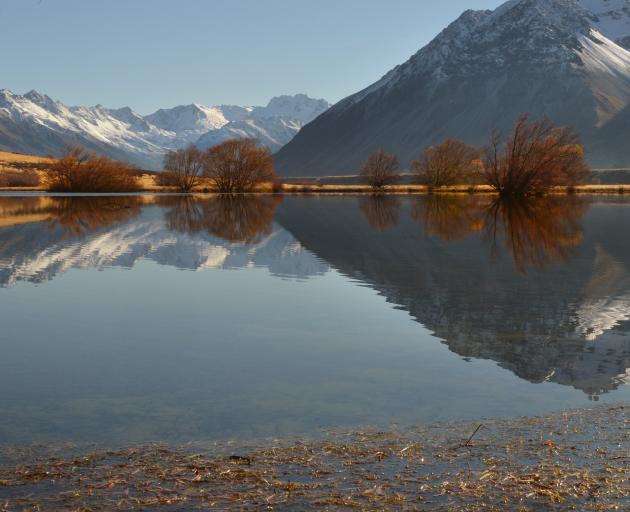 A view up the Ahuriri Valley in the Mackenzie Basin. Photo: Stephen Jaquiery.
The best, easiest, and cheapest thing New Zealand could do for the land and water of the South Island is to stop high country tenure review,  writes Dr Ann Brower, of Lincoln University.

Sometimes the best thing to do is to just stop doing something bad. A recent Environment Court decision says there's a strong case to stop freeholding the South Island high country. The new Minister of Lands, Mark Mitchell, and the acting Commissioner of Crown Lands, Craig Harris, would do well to listen.

The Crown has owned the high country since the 1850s, and leased it to about 300 pastoral runholders. The leases grant very narrow use rights, of pastoral sheep farming, at low rent for 33-year renewable terms. While under lease, runholders cannot irrigate or develop without Crown consent. Subdivision is prohibited.

The Environment Court case concerned land conversions in the Mackenzie. In the Basin itself, the Crown has freeholded 65,000ha in tenure review. For that freehold, runholders have paid about $28million (or $423/ha). This land is, by law, capable of development and commercial production. It's the valley floors and the lakefronts.

At the same time, the Crown has shifted 54,000ha from pastoral lease to public conservation. To retire the pastoral rights, the Crown paid runholders $36million (or $656/ha).

In total, the Crown has freeholded 10,000 more hectares than it conserved, and paid runholders more than $8million on net.

This is not farmers' greed, it's Crown actions. An old cartoon springs to mind: ''We have met the enemy, and he is us.''

Even worse is what happens to the land after freeholding. In the Mackenzie, more than 10,000ha of the new freehold has on-sold for more than $18 million ($1800/ha).

Just south of the Mackenzie lies what's left of Ben Avon Station. In the early 2000s the Crown freeholded 3400ha, conserved 4900ha, and paid $1.2million on net. Since then, the new freeholder has on-sold 719ha in three different sales for $7.7million. One of those sales went through the Overseas Investment Office.

If you're scratching your head, you understand tenure review.

What's more, after land is privatised, it takes on a whole new life - from irrigation in the Mackenzie to subdivision in Central Otago. What used to be about 120 leaseholds is nearly 4000 parcels of freehold.

By all appearances, the Crown is subsidising the conversion of the South Island high country at our expense.

Though land on the shores of Lakes Wanaka, Wakatipu, Pukaki, Hawea, and Tekapo certainly sells at a premium, it's not just runholders near lakes who are making windfall profits. Of the 73,000ha on-sold, only a quarter (just over 17,000ha) is within 5km of a lake (but not necessarily within view of it). This quarter sold for $111million of the $300million.

High country tenure review continues to be a huge transfer of land and money from the Crown to a few hundred runholders. To call it anything but a boondoggle is strategic hypocrisy. Good on the Environment Court for calling for it to stop. Let's hope the Commissioner of Crown Lands heeds the call.

The best, easiest, and cheapest thing New Zealand could do for the land and water of the South Island is to stop high country tenure review. Better late than never.

-Dr Ann Brower is senior lecturer in environmental management at Lincoln University and author of Who Owns the High Country?