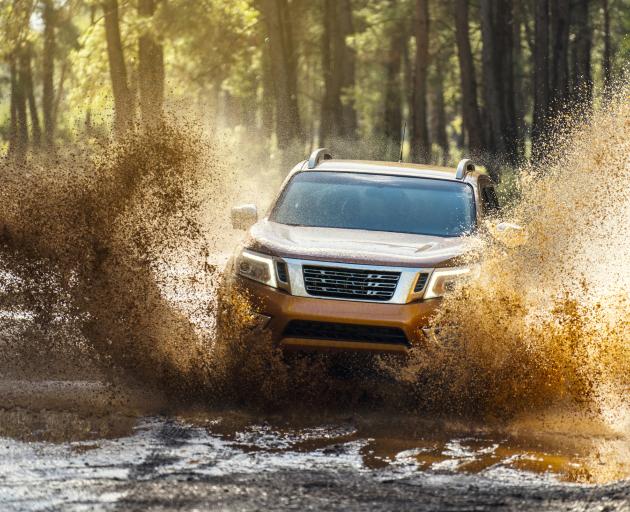 Utes or pickups enjoy the most “masculine” marketing strategies of New Zealand vehicles. PHOTO: GETTY IMAGES
Aggressive marketing has driven the rise of the double-cab ute on New Zealand streets. Is it time to hit the brakes, ask Kirsty Wild and Alistair Woodward.

"Explore your inner beast.” That was the slogan used last year to sell the Ford Ranger. At 2.4tonnes, that’s a lot of “light” truck, but the stakes are rising. This year, the 3.5-tonne Ram 1500 “eats utes for breakfast”.

Super-sized light trucks have landed in Aotearoa New Zealand. Eight out of the 10 top-selling passenger vehicles are now utes or SUVs and two-thirds of them are registered for personal use.

According to the Household Travel Survey, many journeys previously made using much smaller cars (such as shopping trips) are now made in these vehicles.

And despite recent protests from farmers and tradies about the so-called “ute tax”, the double-cab light truck has become very much an urban vehicle.

When we looked at the marketing videos for these vehicles in New Zealand, utes or pickups enjoyed the most “masculine” marketing strategies. Themes of dominance and violence are strong: vehicles have names like “Raptor” and “Gladiator”, and are referred to as “muscular” and “beasts”.

Much of the advertising involves images of aggressive driving — skidding and jumping, with the vehicle generally shot from below, travelling fast at the camera. SUV marketing is slightly more unisex and emphasises safety, luxury and envy.

But here’s the problem: climate change is also super-sizing, as the recent extreme heat wave in the Pacific Northwest of the US and Canada and severe floods in Europe and elsewhere have reminded us.

Light trucks on city streets are bad for the climate in two ways. Due to their weight and size, they emit more CO2 than other vehicles: in a year’s typical driving, 100 Ford Rangers would emit 90 tonnes more CO2 than the same number of Toyota Corollas.

Cyclists and pedestrians struck by one of these vehicles are roughly twice as likely to die or be seriously injured than they are in a crash involving a small car.

Ironically (but deliberately), nature and the ability to connect with the countryside are an enduring marketing theme for selling large four-wheel-drive vehicles to urban dwellers.

As cultural historian William Rollins has pointed out, SUV marketing has exploited and twisted a “developing environmental consciousness” into demand for high-emission vehicles. In the process, time needed to develop cleaner vehicles was lost.

In New Zealand, the shift to larger SUVs and utes has largely wiped out the fuel efficiency gains made over the past 10 years. Globally, the SUV market was the only industry sector last year where CO2 emissions continued to rise despite the pandemic.

The growth in SUV sales has been identified as the second most important reason why CO2 is continuing to rise.

Not a new story

But this is not a new story. Detroit auto journalist Keith Bradsher’s 2002 book High and Mighty: SUVs — the world’s most dangerous vehicles and how they got that way documents the now familiar risks: high emissions, deadly to other drivers and pedestrians, and prone to fatal “rollovers”.

He also provides an extraordinary ethnography of the advertising strategy that formed around these vehicles — some of which now rival the size of a World War 2 tank.

Marketed at our “reptilian” instincts for safety, dominance and connection to the natural world, it had a strong Hobbesian flavour. Life — particularly city life — is nasty, brutish and short. One must dominate or be dominated, even on that trek to the supermarket in search of cat food.

Bradsher’s interviews with marketing executives revealed a deliberate strategy to market these vehicles to consumers with higher levels of egotism, insecurity and status anxiety. New Zealand research with SUV drivers has also shown they were more likely to agree with the statement that “most people would like a vehicle like mine”.

New Zealand has been a dream market for urban light trucks. With weak emission standards and vehicle safety ratings that prioritise drivers over other road users, the regulatory frameworks have created an environment ripe for vehicle super-sizing.

This, too, is a familiar story. The American pickup famously came about as a result of a trade war with Europe that locked foreign competitors out of the US market. The all-American pickup truck came to enjoy a range of exemptions from environmental and safety regulations.

Since then they have been a gold mine. Profits on SUVs and utes are much higher than on cars and the auto marketing machine has swung in heavily behind these vehicles.

About 85% of Ford’s advertising spending is now devoted to SUVs and utes. The $US35billion global auto marketing industry is now largely focused on selling them, including into emerging markets in India and Brazil.

Big-budget marketing campaigns for these high-emission vehicles are now becoming a flashpoint over the role of the advertising sector in climate change.

UK organisation Badvertising, which has called for an advertising ban on the dirtiest third of these vehicles, argues advertising should be “named and shamed”, as with other industries that indirectly contribute to climate change (such as banking and investment).

But the advertising industry itself may be part of the solution. Creatives working with governments on ambitious decarbonisation targets are speaking up about the “tide of misinformation” they face from corporate advertising.

While marketing spending may still be weighted heavily in favour of the auto industry, there are ways of promoting smaller, cleaner, safer vehicles:

- Ban the marketing of the dirtiest third of those vehicles.

And finally, a big one: adopt new advertising codes of ethics to end the promotion of high-carbon lifestyles and products. — theconversation.com

I counted over a dozen major potholes on a recent Otago trip over a 3 hour period- half were unmarked. I am glad I was in SUV because if I was in a smaller car I may have had a flat tyre, or worse. I drive my SUV for safety and the 4WD capabilities which you townies may not appreciate as a lot of Otago roads are gravel. If Otago could keep most or say 90% of our petrol/diesel related taxes/excise instead of sending it north, then our roads would be better.

An interesting piece of green propaganda that doesn't really stand up to scrutiny. Although I don't drive a ute I can see the attraction for those who need the load space, towing capacity and ability to go where a 2wd can't. If we follow the author's logic then even if a non polluting hydrogen version was available, a ute would be undesirable. Why? Because they have been villified as anti green and anti social.

And that villification then leads to what, exactly?

Consider the case they are making. Not everyone's binary reactive.

Calvin and Hobbesian. Marketed for the 'reptilian' brain does not augur well.