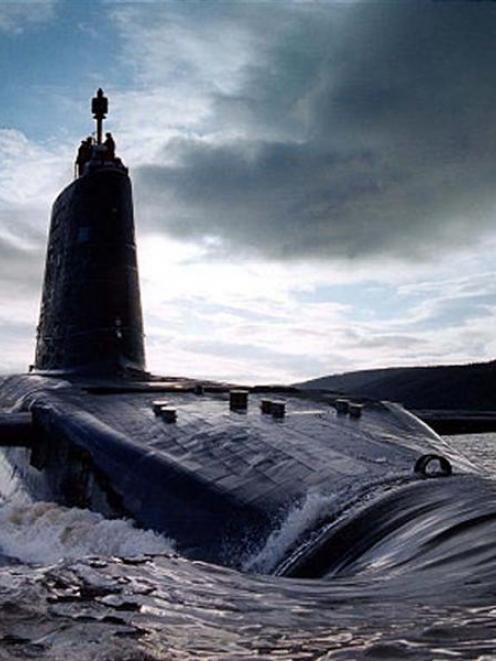 The British Navy's HMS <i>Victorious</i>, a Trident ballistic missile submarine, in the Clyde Estuary. Photo from the British Royal Navy.
The major powers have all had their nuclear weapons on permanent alert, ready to launch in minutes or hours, for the past 40 years. Changes in the level of political risk, even the end of the Cold War, have had little or no effect on that.

But wouldn't it be safer and cheaper to "simply put [the nuclear deterrent] away in a cupboard and keep it as a contingency in case there were ever to be a deterioration in the global security picture"?

In terms of orthodox strategic thinking, that is heresy. But the man who made that heretical suggestion was Sir Nick Harvey, until last month the defence minister in charge of the British Government's nuclear capability review.

Replaced in the recent Cabinet reshuffle, Sir Nick is now free to speak his mind. At the Liberal Democratic Party conference late last month, he did precisely that, saying that he "wanted his legacy to be bringing the United Kingdom down the nuclear ladder" - although, he admitted, "we might struggle to persuade the British public to get off the ladder altogether".

It isn't just the British public that loves its nukes. The American, Russian and French publics would be equally reluctant to give up their nuclear deterrent forces, even though they face no plausible threat of a nuclear war.

(The Chinese public isn't really paying attention yet.) But maybe you could at least persuade the great powers to put the damned things away, and Britain would be a good place to start.

The orthodoxy still says that every self-respecting great power must have its nuclear weapons on permanent alert, in order to deter a surprise attack by some other nuclear power. Nuclear "Pearl Harbours" allegedly lie in wait around every corner.

But, as Sir Nick told The Guardian newspaper: "If you can just break yourself out of that frankly almost lunatic mindset for a second, all sorts of alternatives start to look possible, indeed credible." What drove Sir Nick into this bold assertion was the fact that Britain can no longer afford its nuclear deterrent.

It will have to replace its current fleet of four Trident II ballistic missile submarines by 2028, and the estimated cost is $US20 billion-$US30 billion ($NZ24 billion-$NZ36 billion). That's less than two weeks' worth of American military spending, but for Britain it would mean cutting deeply into every other area of the defence budget.

The British army is "driving around in vehicles which are literally about to fall to pieces", he said. The navy needs a new fleet of frigates, and the air force is committed to buying the joint strike fighter. They can't have it all, and some senior officers are asking: "Is the opportunity cost of having a new generation of nuclear weapons too high, in terms of what it would prevent us doing on other fronts?

" So what are the alternatives to eternal hair-trigger readiness for an attack nobody really expects to come?

You could just get rid of all your nuclear weapons, of course, and you'd probably be just as safe as you are now.

But if you can't get your head around the idea of nuclear nakedness, you could at least store your magical cloak in the closet, safely out of the reach of foolish children.

What Sir Nick was actually proposing was that Britain should get rid of its missile-firing submarines when they get too old, and rely on a few cruise missiles with nuclear warheads to keep everybody else honest. Store them somewhere safe, and don't even take them out unless the international situation has got dramatically worse.

In fact, why not do that right now?

Those "boomers" - nuclear-powered submarines carrying long-range ballistic missiles with multiple nuclear warheads - were really designed for "retaliation from the grave" if all the owner's cities, military bases, ports and hamburger stands were destroyed in a massive surprise nuclear attack. Does anybody expect such a thing in the current era?

And the best thing about putting the nukes in the cupboard is that you eliminate the risk of ugly accidents. In 2009 two boomers, one British and the other French, actually collided underwater. Even at a time unprecedented in world history, when no great power fears attack by any other, it would have been a frightening event if those two submarines had been American and Chinese.

So put the toys away, boys. Don't expect the Israelis, the Indians and the Pakistanis to follow suit, because they live in parts of the world where full-scale war with a powerful enemy is still a possibility. But together they have only about 500 nuclear weapons; the five nuclear-armed great powers have around 11,000.

Somebody has to start, and Britain is the likeliest candidate of the five. Sir Nick Harvey lost his job in the Cabinet reshuffle, but the "nuclear capability review" is still under way.

Even Britain's generals think that another generation of fully deployed missile-firing submarines would deprive them of most of the other new weapons they want, so the issue will stay on the table. Dumping the boomers and locking the remaining nuclear warheads in the cupboard would be a useful halfway house on the way to getting rid of them entirely.