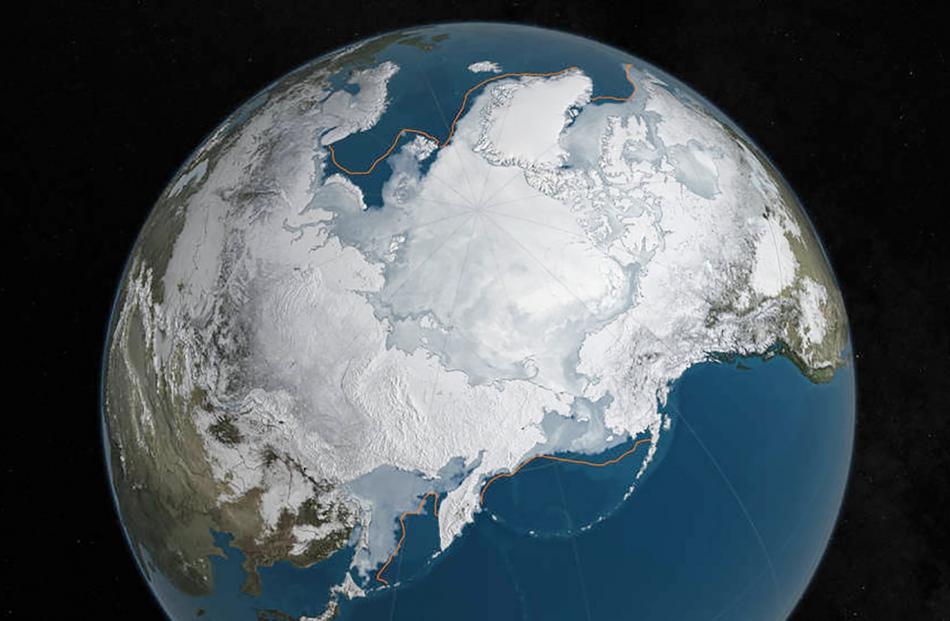 The plus-two threshold for global warming is the point which will trigger natural feedbacks that humans cannot control, such as the loss of Arctic sea ice, as pictured in this Nasa image. Image supplied by Reuters.

Most people think of global warming as an incremental thing. It may be inexorable, but it's also predictable. Alas, most people are wrong. The climate is a very complex system, and complex systems can change in non-linear ways.

In other words, you cannot count on the average global temperature rising steadily but slowly as we pump more and more greenhouse gases into the atmosphere.

It may do that - but there may also be a sudden jump in the average global temperature that lands you in a world of hurt. That may be happening now.

‘‘We are moving into uncharted territory with frightening speed,'' Michel Jarraud, secretary-general of the World Meteorological Organisation, said last November.

He was referring to the fact that the warming is now accelerating in an unprecedented way.

The year 2014 was the hottest ever - until 2015 beat it by a wide margin, and 2016 may beat that record by an even wider margin. It was the hottest January - and then the average global temperature in February was a full fifth of a degree Celsius higher than January.

That was a huge jump, since the ‘‘average global temperature'' is an average of all the temperatures over the seas and the land in both the summer hemisphere and the winter hemisphere. It is normally a very stable figure, changing no more than a few hundredths of a degree from year to year.

But March was not only hotter than February. It was hotter by an even wider margin than February was over January. Indeed, each of the past 11 months has beaten the highest previously recorded average temperature for that month.

Some people try to explain this all away by blaming it on El Nino, a periodical rise in the ocean surface temperature in the eastern Pacific that moves the rainfall patterns around worldwide, causing droughts here and floods there.

But El Nino is a local rise in temperature. It does not normally affect the average global temperature much.

El Nino had not even begun when 2014 beat all the records for average global temperature. It was a powerful influence on weather patterns for all of 2015, but climate scientists estimate that it was responsible for only 10% of the record warming in that year.

It would still have been hotter than 2014 even if you subtracted the El Nino effect.

As for the frightening acceleration in the warming in the past three months, that has no precedent in any El Nino year, or indeed in any previous year. It could be some random short-term fluctuation in average global temperature, but coming on top of the record warming of 2014 and 2015, it feels a lot more like part of a trend.

Could this be non-linear change, an abrupt and irreversible change in the climate? Yes. And if it is, how far will it go before it stabilises again at some higher average global temperature? Nobody knows.

Last year, the average global temperature reached one full degree Celsius higher than the pre-industrial average. That is halfway to the plus-two degree level which all the world's governments have agreed we must never exceed, but at least we got to plus-one slowly, over a period of two centuries.

The plus-two threshold matters because, at that point, the warming we have already caused will trigger natural feedbacks that we cannot control: the loss of the Arctic sea-ice, the melting of the permafrost, and immense releases of carbon dioxide from the warming oceans.

After plus-two, we will no longer be able to stop the warming by ending our own greenhouse gas emissions.

Even at the global climate summit in Paris last December, there was still hope that we might avoid triggering the feedbacks, because the historic rate of warming would still give us about 25 years to work on cutting our emissions before we reach plus-two.

But if the current non-linear surge in warming persists, we could have covered half the remaining distance and reached plus 1.5 degrees by the end of this year.

Obviously, most scientists will not go this far in public, but they are very worried. As Stefan Rahmstorf of the Potsdam Institute of Climate Impact Research told The Guardian recently: ‘‘We are in a kind of climate emergency now.''

I'm not a scientist, but 10 years ago I spent almost a year interviewing almost all the world's leading climate scientists for a book I was writing. I learned that all our calculations for dealing with climate change could suddenly be swept aside by a non-linear event - and this could be it.