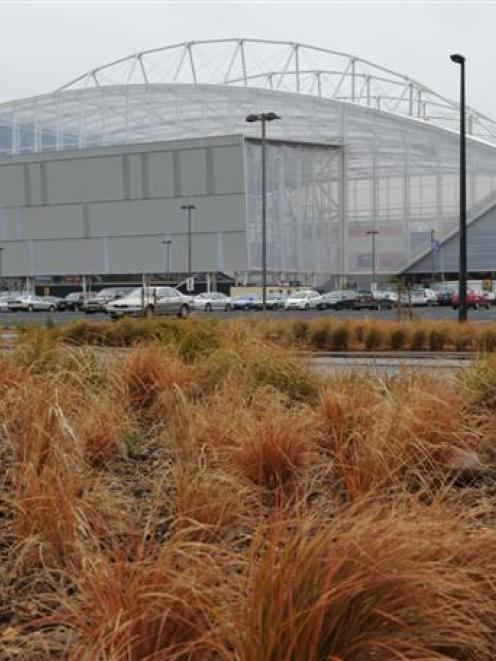 Time will tell whether Dunedin's stadium was a good deal. Photo by Gerard O'Brien.
Dunedin City Council watchdog Calvin Oaten has analysed the costs of and contributions for the Forsyth Barr Stadium as he sees them.

It is now seven months since the Forsyth Barr Stadium was completed and the Dunedin City Council felt it was incumbent upon them to spend $50,000 in order to ascertain the exact cost of the project.

Amazing though it seems, apparently they don't know. Why?

I believe that in Donald Rumsfeld-speak, there are enough "knowns", several "unknown knowns" and a host of "unknown unknowns" surrounding this project but, nonetheless, enough "knowns" to establish very closely the cost without spending an additional cent.

Let's start with the 2009-10 Long Term Council Community Plan when the projected budget and contributors indicated the cost at $198.3 million.

The land purchase original cost estimate was $15 million but the actual cost was some $36 million, an increase of $21 million.

The university purchased back land for Unipol plus a share as tenants in common with the DCC for the plaza, neither of which was stadium proper. The alleged amount was $6 million. This brings the stadium land back to $30 million, less the Government contribution bringing the cost back to $15 million as budgeted.

Therefore the new contributory budget is:

It has since been announced that the private funding is to come in annual installments over 10 years, or average $4.53 million a year. Also, it is now to be diverted to Dunedin Venues Management Ltd, which in turn is to pass it to DVL for the express purpose of servicing DVL's debt. So the new budget would be as:

Since completion, we know that DVML has incurred debt to the tune of $6.5 million for big screens, signage, additional toilets, catering fit-out and temporary seating. Then there is the matter of the interest expense over four years which has been capitalised, amounting to $28.3 million. Should this be attributed to the stadium?

Therefore the DCC's share of the costs would be:

That appears to complete the "knowns" in costs of the project. So the new budget would be:

"Unknown knowns":
• The $50,000 independent PricewaterhouseCoopers assessment of costs, plus the awaited full six-monthly report of DVML.

"Unknown unknowns":
• The final outcome of the ORFU/DCC agreement which at present adds $480,000 to the total.

• The fortunes of both the Highlanders and the Otago ITM Cup teams and their returns to the stadium.

• The ability of DCHL to pay $5 million a year for 40 years towards the capital repayment of the debt.

• The certainty of the private funding coming in for 10 years to total $45.3 million.

• The unresolved amount of the university's contribution.

• The likelihood of interest rates staying at 7% for the full 40 years.

• The ability of DVML to attract additional events to the stadium to bolster its income to sustainable levels.

This all takes no account for such things as depreciation, maintenance, the fact that 60% of the ORC's ratepayers are also DCC ratepayers with their costs pertaining to the $37.5 milllion. Nor does it account for the loss of rates from land expropriated, for the stadium, Carisbrook purchase and State Highway 88. A significant factor nonetheless.

There we are. A good deal? We will see.

• The council's "independent" review examing the final cost of the stadium is now due to be made public next month.