We must resist intolerance of all kinds 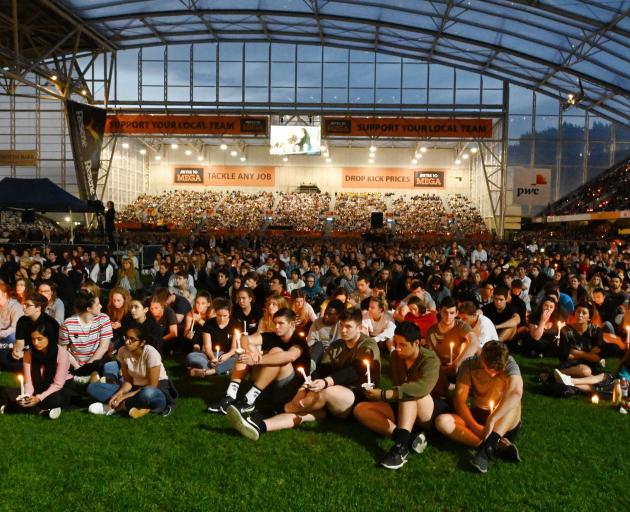 The response to the Christchurch shooting was a strong show of unity. Photo: Gerard O'Brien
New Zealanders must resist the divisions created by intolerance of diversity, writes Don Moffat.

I live in a consciously diverse community, one reflected in the multilingual greeting above. It is a community where communication is important and where wise speech is needed.

The recent Christchurch shooting highlighted how intolerance of difference, when fanned by the inflamed rhetoric of internet communities, can lead to the horrors that left the country stunned. One reaction has been to try to rein in "hate speech" and other content displayed by social media. However, control of the media leaves some disquiet about where freedom of speech rests. We are left with a tension between maintaining freedom of speech and controls that restrict freedoms. One allows hate speech, the other silences dissent. Debate that pits important societal values against each other can easily tear our social fabric.

The tension between important societal values also arises when there is a conflict between freedom to hold religious convictions and concern for tolerance and inclusiveness. Social media is a blunt instrument when it comes to social debate, while temptations to sensationalise often intrude on other forms of media discussion. All of which means that considered and nuanced debate is often overruled by tribalistic side-taking and sloganeering. One side labels ideas it dislikes as hate speech, while the other reaches for its scripture, which it frequently uses inappropriately. Both sides quote celebrities to reinforce entrenched positions. The wisest words, often a mediating position, are frequently ignored.

The ancient wisdom in the biblical book of James tells us that speech is easily inflammatory. Using the image of the tongue as a "fire" and calling it "a restless evil", James warns how damaging ill-considered words can be. The book goes on to urge its readers to a life of good works "done with gentleness born of wisdom".James also points to the signals of true wisdom. First, it is pure - that is, it stems from pure motives. It is also, "peaceable, gentle, full of mercy and good fruits, without trace of partiality or hypocrisy." That is a call to treat each other as real people whose opinions should to be listened to. Wise debate requires genuine motives and comments that are gentle, that look for real solutions and are directed to real people. Lobbing frequently inaccurate comments at people characterised as the opposition resolves nothing.

Societal debates about free speech versus hate speech, or religious freedom versus inclusiveness, are often necessary, but can easily sow seeds of division. We need to be careful about how we conduct such discussion.

New Zealand responded to the Christchurch shooter's attempt at creating division by a strong show of unity. There was a rejection of divisive ideas and a strong assertion of religious freedom. As we deal with the fallout and enter other social debates, the ancient words of wisdom that call for pure motives without hypocrisy, and remind us to treat each other with gentleness and mercy, are a good guide.

We need to resist the divisions created by intolerance of diversity, including sexual orientation and religious conviction. As Psalm 133 reminds us: Vakai ki hono lelei pea mo hono fakafiemalie o e nofo fakataha a e kainga i he feofoofani.

How very good and pleasant it is when kindred live together in unity!

- Dr Don Moffat is the Sir Paul Reeves Lecturer in Biblical Studies and visiting lecturer in Theology at Otago University.

Individuals, not tribes. People, not ideology. Respect, not populism. Social cohesion, not scapegoating. Reason, not fundamentalism across Abrahamic religions. Tolerance, not demonisation, of straight talking feminism.

I didn't get that notice.

And, acceptance of female empowerment. It's mainstream, not marginal.